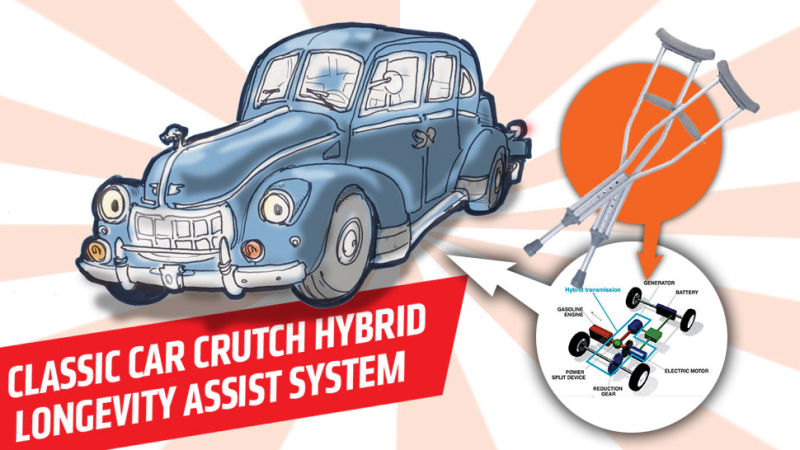 Some of you may recall Raph’s article from yesterday where we showed you the shockingly pristine valvetrain of a 500,000 mile NYC Escape Hybrid Taxi. When I saw Raph on our way to the de-lousing booths, I asked him about it. Still groggy from the de-lousing fog, he just murmured “it’s the hybrid.” And that gave me an idea involving old cars.

If you drove a car hour after hour, day after day through Manhattan as a taxi, you’d expect the… Read more Read more

Essentially, what’s going on is that in the case of these incredibly high-mileage NYC Escape Hybrid taxis, the electric motors are taking a surprising amount of strain off the combustion engine, which means far less wear, even after half a million miles. It helps with brakes, too, since the regenerative braking system converts the speed into more electricity instead of just heat and lost brake pad wear. The electric drive system is at its best and most active at precisely those places where the ICE engine is at its worst, and most prone to damage and wear — low-speed, stop-and-go driving.

While considering this, it occurred to me that the lessened-wear benefits of having an auxiliary electric drivetrain is something with a lot of appeal far beyond the taxi world, and even beyond regular private car ownership. There’s a group for whom this technology could benefit greatly, and, as far as I’m aware, no attempt has yet been made to do so. That group is vintage and rare cars.

Let’s just think about it for a moment. Many valuable, collectible, and appreciated vintage and rare cars are, by their very nature and name, old and rare. That means that anything that goes wrong mechanically is a much, much bigger deal than in any sort of more modern car with readily available parts.

I’m a firm believer that cars were meant to be driven, and I have a ton of respect for anyone who drives their own vintage and/or rare cars. But I also understand that there can come a point where the risk of any mechanical failure negates any pleasure you may get from driving the car, and that’s a shame. If you throw a rod in a vintage Tatra, sure, you can likely eventually find new parts, but it can be a long, tedious, international and expensive process. And one-offs are even worse — if you burn a valve in a 1924 Sasquatch Landlover with its one-of-a-kind inline-13 engine, you’re pretty much boned.

So, what can be done? Is there a way to at least minimize the risk of mechanical failure and drive the amazing vintage cars you love?

I think so. And I think the answer is a hybrid.

Specifically, what I’m thinking of is an add-on electric power module. Essentially, it would work like a mild hybrid system, where an electric motor, inline with the primary drivetrain, acts as a power booster or assist for the combustion engine. The difference here from conventional, modern cars with these systems is twofold:

• The goal is to minimize stress on the car’s original engine, to maximize engine longevity as opposed to improving fuel economy and emissions

• The hybrid assist unit should be installable and removable without major alteration of the original car.

The system I came up with would look something like this: a relatively flat, unitized package that would contain an electric motor, batteries, and associated controllers and electronic hardware. All the same stuff used in hybrids today.

I’m imagining something with an electric motor making about 10-20 HP — not much, but a substantial help to an older engine, especially during taxing driving. The motor would be coupled to the car’s existing driveshaft via — and this may not be the ideal way, but it’s the one I’m picturing — some manner of friction drive.

There’d have to be some rubber (or other high-friction) drive wheel that could be clamped in place to the driveshaft, so the electric motor could freely turn the driveshaft, or be turned by it to re-generate electricity.

Under the motor assembly would be two flat packages of batteries — not huge ones like in a full hybrid, but closer to what’s used in mild hybrids. We’re not going for range here, we just need enough capacity to provide useful assists when needed. Somewhere in front of the batteries would be the packaging for the motor controller and other electronics for the unit (sensors to know when to turn on/off, etc).

I’m imagining all this stuff being placed into a sort of adjustable tray, something that can be re-sized to fit a given model of car’s dimensions, and then installed on the frame rails under the car. It would fit around and under the driveshaft, and ideally wouldn’t compromise ground clearance substantially.

If possible, it would simply bolt in using mounting hardware that would work with the original car’s undercarriage without requiring (or at least minimizing) permanent alterations.

Once in, the driver would ideally barely even realize it’s there. The car would be a bit heavier, but the weight would be very low and the electric assist should be able to compensate. When the motor controller’s sensors hit a pre-set limit for the ICE engine’s RPM (or speed, or temperature, or some other similar metric), the electric drivetrain would kick in, helping to turn the driveshaft so the car’s original engine won’t have to work so hard, and as a result, will incur substantially less wear.

Such a system could also provide a handy ‘limp home’ functionality in case the orginal engine suffers some failure. The electric motor would take over all propulsion duties (some throttle interface would need to be in place) which would let the oldtimer remain mobile and able to get to safety.

Really, it’s just an unobtrusively-packaged parallel drivetrain designed to let owners of really old and interesting and rare stuff keep these old gems mobile and on the road. In my head, I was thinking about this like a crutch — some outside tool that helps you get around. That’s why I was calling this idea the extremely catchy name of Classic Car Crutch Hybrid Longevity Assist System, or CCCHLAS. Catchy, right? And it includes the word “crutch” in the name? Sexy!

Okay, the name sucks, but I think the concept is sound, and something like this could be a huge boon to people who want to show, parade, drive, and simply enjoy their old, strange rattletraps. It’s not taking away the original engine or the sounds or the smells — it’s just a little gentle push when needed to help keep things going, and to keep the truly old, vintage engines from working too hard.

There’s still issues to figure out — this basic design only really works on front engine/rear drive cars with driveshafts — the most common, sure, but what about my beloved rear engine/rear drive cars? Or, say, an early Traction Avant? There should also be a way to couple this to the half-shafts of cars with all their business at one end or the other, but I suspect I’d need a real engineer to figure out the best way to accomplish that.

So, Packard and Panhard owners, Hupmobile and Humber aficionados, Studebaker and Stutz geeks, tell me what you think! Is this something you’d consider for your cars? Would it open up new opportunities and freedom by acting as a sort of safety net? I’m genuinely curious.

And the rest of you, as usual, can remind me that I’m an idiot.