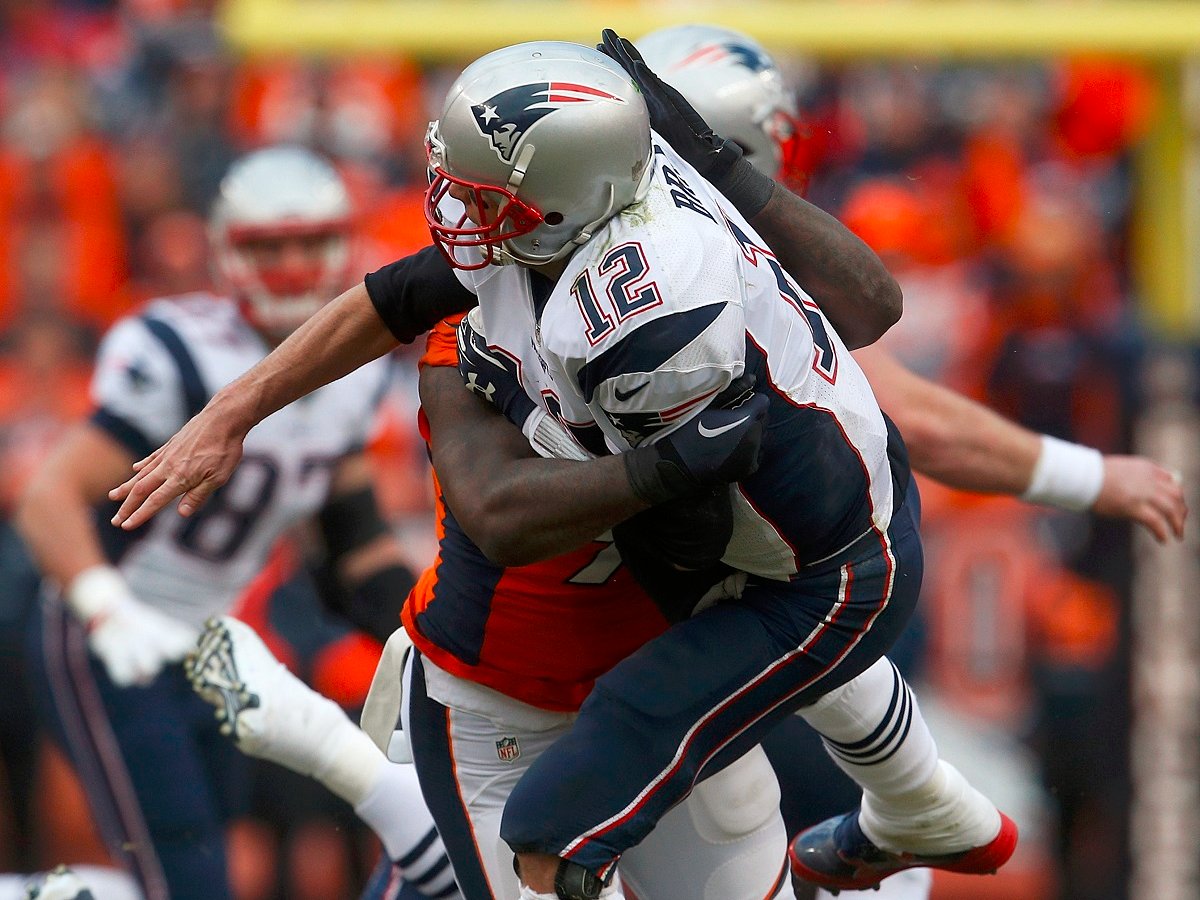 The Denver Broncos pulled off a shocking 20-18 win over the New England Patriots on Sunday to advance to the Super Bowl.

While the game was largely hyped as another quarterback duel with Tom Brady and Peyton Manning pitted against one another, it was the Broncos defense that stole the show.

The Broncos defense managed to hold Brady and the Patriots to just 18 points. Furthermore, the Broncos sacked Brady four times while forcing him into two interceptions and hitting him another 20 times.

This Broncos defense finished first in the NFL in defensive efficiency, first in pass defense, and first in sacks, and they dominated in a game that many had written off as a Patriots win.

The development of the Broncos defense began with a fundamental shift after they were crushed by the Seattle Seahawks in the 2013 Super Bowl. Broncos GM John Elway began to change the foundation of the team, turning them into a more run-heavy, defensive team that put less pressure on Manning to carry them.

That was helped by drafting two of Sunday’s stars, Von Miller and Derek Wolfe, with the No. 2 pick in 2011 and the No. 36 pick in 2012, respectively. In the 2014 offseason, following their Super Bowl loss, they invested heavy money in players like DeMarcus Ware, cornerback Aqib Talib (luring him from the Patriots), and safety T.J. Ward.

All five played a huge part in the Broncos’ battering of Brady (though Ward sat out later on with an injury).

As ESPN’s Jackie MacMullan noted, the Broncos pulled off a bold game plan, consistently sending four rushers to Brady while dropping the other seven defenders into coverage. Brady isn’t the type of quarterback to make big scrambling plays, but on Sunday, Brady led the Patriots with 13 rushing yards, showing the Broncos’ game plan worked.

ESPN’s Bill Barnwell elaborated on some of the Broncos’ defensive schemes, saying they were built around the idea that Denver didn’t fear New England’s running ability at all. The Broncos would often lineup with their linemen and tackles spread far apart, then frequently put Miller over center, thus spreading the area New England’s offensive line had to defend. With the inside rush being one of New England’s biggest weaknesses, this gave Miller a wider area to attack. Throughout the game, the Broncos had no problem getting to Brady, and as they stifled his options down the field, Brady’s quick release wasn’t as effective without any clear windows:

The Broncos didn’t have much success in slowing down Rob Gronkowski, who had eight catches for 144 yards and a touchdown, but they did help neutralize New England’s other options. Julian Edelman had a quiet seven catches for 53 yards, often being draped by Chris Harris Jr., who even when conceding a catch, often brought Edelman down immediately after. Danny Amendola had just five catches for 39 yards.

Von Miller, who had a monster day with 2.5 sacks, two tackles for losses, and four quarterback hits, seemed to know exactly when the ball was being snapped. Watch him begin his attack at such a precise time.

The Patriots were also thrown off by the crowd noise in Denver. They had to use a silent count, which furthered their difficulties against the Broncos’ pass rush and secondary.

The Broncos’ scheme came up big on the game-sealing play. With the Patriots forced to go for two, DeMarcus Ware broke through the line and came at Brady from the left side. Brady had to peel out to his right, then throw across his body to Edelman. Talib was there to tip the pass, and it was picked off by Bradley Roby, who was back in coverage.

Remarkably, the Patriots still had several opportunities to tie up the game, and they couldn’t get it done. In the second half, their defense quieted Denver’s offense, but Brady simply didn’t get the breathing room to get any type of rhythm going.

Now, going into the Super Bowl, the Broncos have to feel good knowing their defense just terrorized one of the best quarterbacks in the NFL as they prepare to face another in Cam Newton.