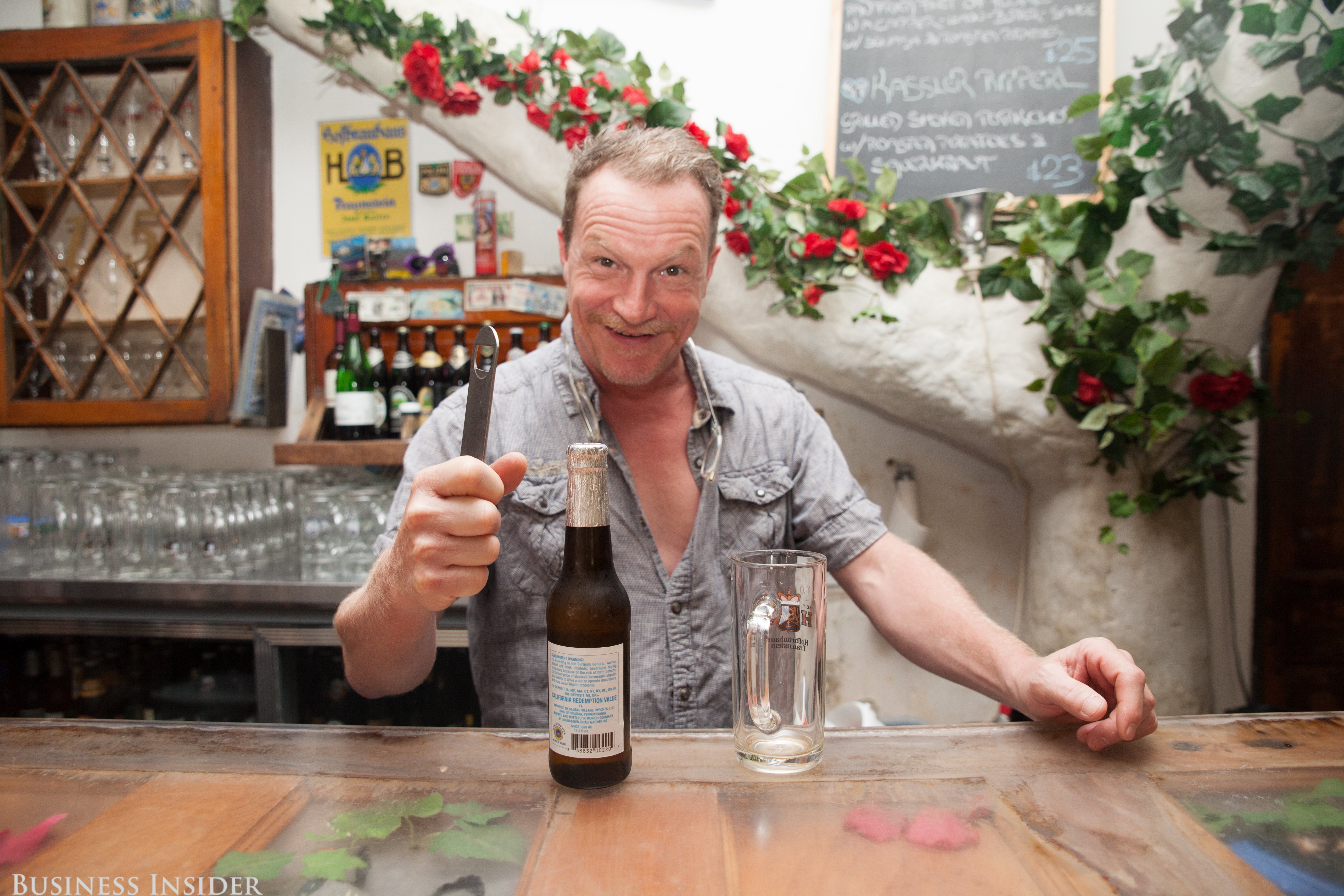 Pouring beer is more than getting the liquid from one vessel to another: it’s an art form, as well as a science that has its own methodologies, constants, and variables. With London Beer Week(February 22-28) underway in the British capital, it’s a good time to revisit your pouring technique.

Of course, no one has perfected pouring liquid gold quite like the Germans, famous for their expertise in all things beer, as well as their stringency in, well, everything. We tapped a real live German — Sylvester Schneider, owner of German bar and restaurant Zum Schneider in New York’s Alphabet City, and expert pourer and drinker of beer — to show us how it’s done correctly. According to Schneider, how you pour your beer depends on what you’re drinking. There are three styles of beer: lager, pilsner, and wheat beer (weissbier), and each is poured differently. It also helps to know that there are different wheat beers, some of which have more yeast than others. Schneider Weisse for example has a lot more yeast than Paulaner or Franziskaner beer.

“The thing with German beer in general is that you want a nice head. We’ve been getting this complaint for 15 years, since we opened, that we’re not giving people enough bang for their buck. But we’re very stubborn about this: if you don’t like it, go somewhere else,” says Schneider about the American versus the German way.

And indeed, an around 1.5 inch head of foam is standard in Germany, where a beer without foam is just wrong. “Beer needs to look appetizing just like a plate of food needs to look appetizing,” he says, “and a beer with two millimeters of foam is not appetizing, at least not in my world.” He further explains that most German glasses have markings denoting where to fill the glass to: if you fill it all the way to the top, and the little bit of foam melts, you’ve given away too much beer. Sarah Jacobs/Business InsiderSchneider demonstrates how to swirl the bottle to loosen the yeast before pouring it into the glass.

German weissbier has chunks of yeast at the bottom, which are essentially a delicacy that you shouldn’t let go to waste. Make sure to loosen said yeast and pour it into your glass with the rest of the beer (see below).

In general, Germans are anti fruit in beer. “There is only one exception, and that’s a kristallweizen. A kristallweizen wants to have a lemon. A lot of people ask for a lemon for their regular weissbier and we tell them no. Blue Moon started that orange bs. I think the owner of Blue Moon has a huge orange plantation,” Schneider jokes.

“One of the most important rules is don’t ever pour your old beer into your new beer. People like to do that here very much.”

How to pour a wheat beer According to Schneider, wheat beers and pilsners are more “explosive” than a lager, meaning that they are more carbonated. This means that you need to pour it at an angle, or with the bottle inside of the glass, as well as pour it slowly. “Even back home there are people that don’t know how to pour a weissbier,” Schneider says, before walking us through it.

How to pour a pilsner How to pour a lager NOW WATCH: Secrets of the Statue of Liberty