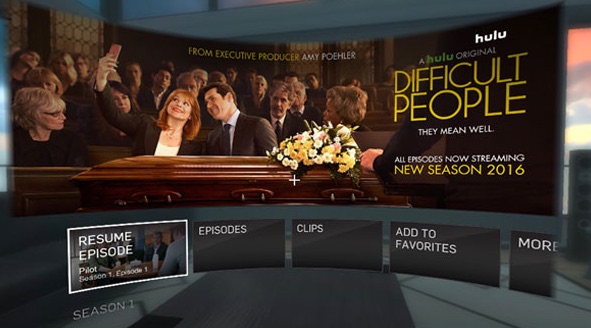 Hulu first revealed plans to stream video in virtual reality back in September and, on Thursday, it finally released its first app for the Gear VR. The service offers a mix of 360-degree videos along with more traditional TV shows and movies to watch using Samsung’s headset.

Company exec Ben Smith told Variety that the release was delayed so Hulu could offer a solid VR product right off the bat. The app includes almost 30 immersive videos specifically for viewing in virtual reality from National Geographic, Discovery, Showtime, Viacom and others. Hulu’s also commissioned an exclusive short called “The Big One” that lets you experience a cataclysmic meteor shower in 360 degrees.

The app’s menu is presented in a virtual living room of what looks like a fancy penthouse apartment. It seems pretty similar to Netflix for Gear VR, which still only plays flat videos inside the headset. Plenty of other video streaming services, including Twitch and Video, are also expected to launch their own competing apps soon.

For now, Hulu for Gear VR is free to use whether or not you pay for Hulu Plus. That includes the app’s 360-degree content, and the company says it probably won’t start to monetize those videos or include immersive ads until the technology catches on.