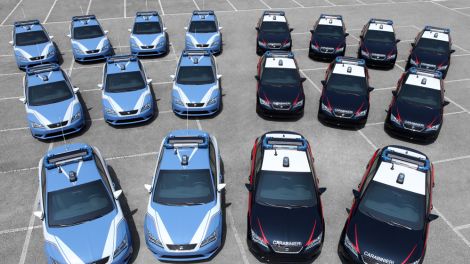 Rome, Italy is as much of a “car city” as New York- it’s a real pain to park and the roads are rough, but there are a few diehards with sweet rides crammed into back corners of cobblestone streets. Also, every little econobox from Europe looks fresh and exotic if you’re used to American traffic!

I was in Rome last month road testing the 2017 McLaren 720S, which was generally spectacular. But I found time to wolf some pasta down my gullet and scope out some cars before the festivities began.

There are lot of scooters, generally tiny commuter cars, and a handful of very cool police-duty Land Rovers that I caught on my brief tour around the center of town.

I came back home with a newfound appreciation for Fiats, Alfa Romeos, and cute police sirens. American cop cars got nothing on their European counterparts when it comes to whimsy.

The Italian Cops Switched From Alfa Romeos To These Bulletproof Seats

Spotted In Rome: The Curious Quadracycles Of Italy