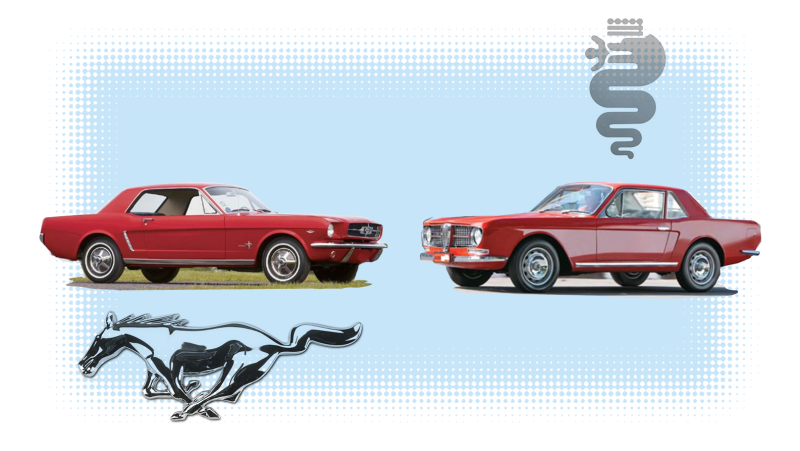 If you have tastes that appreciate more mainstream collector cars like classic Mustangs or vintage Alfa Romeos, but really want something much more uncommon, and, ideally, deeply confusing, then I really think there’s a car you should be aware of: The FNM Onça, a car with license-built Alfa Romeo mechanicals and a fiberglass body that is pretty much a direct copy of a first-gen Ford Mustang. Oh, and as a little automotively-confusing cherry on top, the name Onça means “jaguar.”

Everything about this story is pretty confusing, so we’ll just try and get through it as best we can. The FNM company was started in 1942 by the Brazilian government to build many industrial items, but soon transitioned to heavy-duty trucks, specifically Isotta Fraschini trucks, built under license.

Isotta Fraschini eventually went bankrupt, so FNM entered a deal with Alfa Romeo to build their trucks, and, later, in 1960, FNM got a license to produce the Alfa Romeo 2000 Berlina.

FNM became so associated with Alfa that they even remade their logo to include a dragon/snake swallowing a dude, just like the Alfa logo:

In 1966, FNM decided they’d like to make a sportier coupé version of the FNM 2000 (their version of the Alfa 2000 Berlina), and for some reason they decided that the best design for their new sporty car would be to make a near-perfect copy of the Ford Mustang (introduced in 1964), but keep a traditional Alfa Romeo grille and front fascia.

I think the result actually looks kind of fantastic. The basic Mustang shape and proportions actually work quite well with the Alfa face, and with the shortened wheelbase, light fiberglass body, and a 1.9-liter inline-four with twin Weber carbs making a respectable 115 horsepower, I bet it was pretty fun to drive, too.

Speaking of driving, on one of the test drives of the prototypes, what may be the weirdest test drive problem I’ve ever heard of happened:

“A hundred miles an hour, suddenly, a noise and everything went dark: above the heads, a quick noise of something being torn. The ceiling lining fell off and fell on the occupants, like an empty, wide airbag. Barone managed to stop the car in a straight line. With fright, but without damage.”

The reason for the detachment of the ceiling was no less curious: it was because the air inlets of the front wings had channeled air into the ceiling columns, inflating the lining to tear it. These entries no longer exist in the production model.”

So, if you can get through the poor machine-translation of Portuguese, what happened was that air intakes in the front fenders were channeling air through the A-pillars on either side of the windshield and inflating the headliner like a balloon! That’s genuinely bonkers.

The Onça was shown at the 1966 Brazilian Motor Show, but despite a good reception, only five were actually built,mostly because the whole project was undertaken without the knowledge or approval of Alfa Romeo, who were understandably not thrilled about having what was essentially a knockoff of the best-known car of one of the world’s largest automakers with their name and grille on it.

So, in the end, only five of these remarkable Alfastangs were built. Only three are known to survive, one of which is being restored by Ricardo Oppi (?) in Brazil:

I’d love one just so I could organize a combined Alfa Romeo/Mustang car show, and park this thing right on the border between the two groups. I’d just set up a lawn chair right in front of it and savor the resulting confusion.

(Thanks to Thomas’ post about this car on FB for making me realize how amazing it is!)