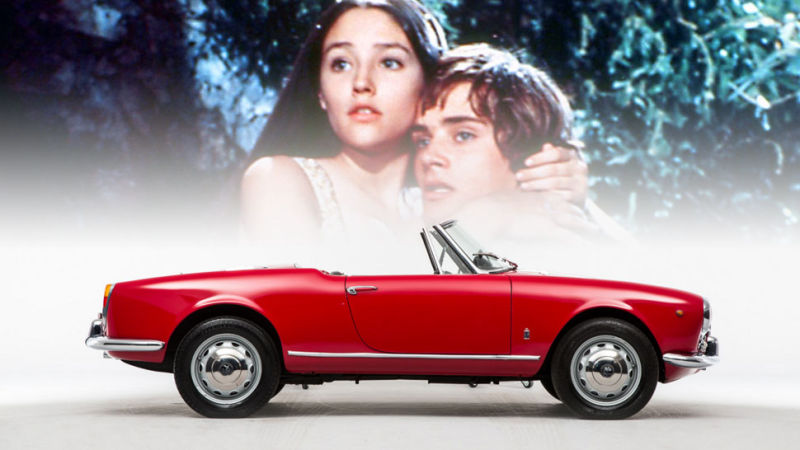 It’s almost Valentine’s Day, so if you’ve forgotten to do anything nice for your partner, here’s your warning. Get your ass in gear. If it helps get you in the mood, consider this: was one of the loveliest cars ever made, the Alfa Romeo Giulietta, named for Juliet? You know, Juliet Capulet?

The rumor I had always heard was that the car was named Giulietta (Italian for Juliet) as an homage to the famous 1996 Baz Luhrmann movie (which was later sent back in time to around 1595, where it was adapted into a stage play by Bill Shakespeare), Romeo and Juliet. The ‘Romeo’ part was, of course, from Alfa Romeo, so that with the Giulietta seemed to make sense.

That’s romantic and all, one car named after two of the most famous lovers, but it’s not clear how true the story actually is. Actually, I’m not sure most people even know where Alfa Romeo gets their name at all, so let’s clear that part up first. Our friends at Ate Up With Motor put explain it well:

The “Alfa” in Alfa Romeo is an acronym: Anonima Lombard Fabbrica Automobili, originally rendered A.L.F.A. The company was actually founded in 1906 by the French entrepreneur Alexandre Darracq as S.A.I.D. (Societa Anonima Italiana Darracq). It changed its name three years later following its purchase by an Italian consortium eager to disassociate themselves from the colossal commercial and technical failure of S.A.I.D.’s early cars. The “Romeo” came from industrialist Nicola Romeo, a one-time mining engineer who purchased the ailing concern in 1915 and installed himself as its managing director.

Okay, so the Romeo here isn’t the Romeo of the play, the hopeless romantic who’s infatuated with a 14-year-old. Just so you know.

Now, for the Giulietta part, it looks like there’s three main stories as to where the name comes from:

• First, and more boringly, someone just picked it. That someone was Giorgia De Cousandier, wife of a poet with an engineering degree named Leonardo Sinisgalli. She proposed the name, and may very well have been thinking of the famous lovers, but it’s not known for sure.

• There’s also Federico Fellini’s wife, Giulietta Masina. She became the car’s “godmother” when Giulietta 100,001 was built in 1960. It’s not clear if the car was named for her, or if she just became associated with the car due to their shared name.

• The best story is this one: In 1950, Grand Prix driver Jean-Pierre Wimille and a bunch (presumably seven, you’ll see) of Alfa Romeo directors and bigwigs were all in Paris for the launch of the Alfa Romeo 1900.

“You are eight Romeos, without even one Giulietta?”

… and after that I’m imagining he drained his snifter of vodka, threw some flash powder on the floor, and disappeared.

The eight “Romeos” probably then looked at one another knowingly, thinking that this crazy Russian with the jaunty crown may be onto something.

So, there you go! A definitive answer! The Alfa Romeo Giulietta was definitely sort of named after Juliet from Romeo and Juliet, obliquely, and if you believe one of these completely unsubstantiated stories.