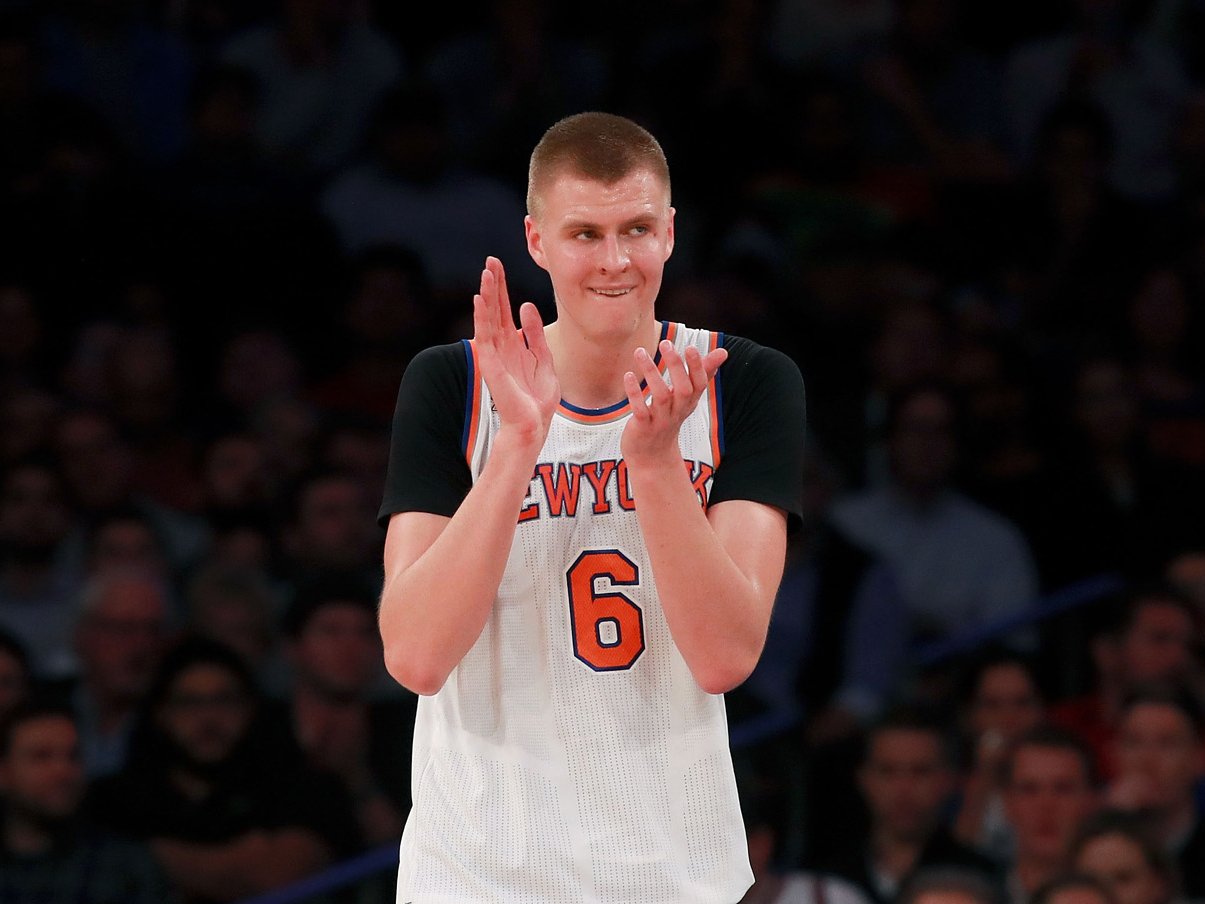 At 21 years old and 11 games into his second NBA season, Kristaps Porzingis had the Madison Square Garden crowd serenading him with “M-V-P!” chants as he shot free throws.

Though Porzingis — after scoring a career-high 35 points on 13-22 shooting to go with seven rebounds, three assists, a steal and a block in a 105-102 win over the Detroit Pistons Wednesday night — shrugged off the chants, there’s a truth to the crowd’s cheers.

Porzingis, if not the Knicks’ best overall player, is certainly their most versatile. It’s been repeated ad nauseam, but at 7-foot-3, Porzingis possesses a rare bouquet of shooting range, athleticism, off-the-dribble dexterity, and defensive instincts. And he’s only 21.

Head coach Jeff Hornacek added that Porzingis is “probably just scratching the surface of what he’s going to become, so it’s going to be fun to watch.”

If Porzingis’ impressive rookie campaign proved he belonged in the NBA, so far, his sophomore season is showing that he can dominate in the NBA. For stretches Wednesday night, Porzingis carried the Knicks, aggressively pursuing his own shot and attacking a mismatched Pistons defense.

In the second quarter, playing with the Knicks bench, Porzingis caught fire, showing off his entire offensive repertoire:

The run was highlighted by a flying and-one alley-oop that sent the crowd and his teammates into a frenzy.

Though Porzingis remains a work in progress on the defensive end — he can be spacey off the ball, unsure of rotations, beaten off the dribble by smaller opponents, and out-muscled by bigger players — his skills are bubbling near the surface.

As a rim protector, his length is his greatest attribute, as he showed against the Pistons, rotating for a nice block at the rim. (That he high-fived fans after furthered endeared him to the crowd.)

According to Begley, there were times last season when Knicks brass felt Porzingis was their best player. Though consistency and development remain roadblocks for Porzingis to assume that title full-time, he appears to be on his way.

This season, Porzingis is averaging 20.7 points on 49.7% shooting, 40% from three, with just under seven rebounds and just over one block per game. Over his last seven games, he’s scoring 24 points per contest. The Knicks are 5-2 this season when he scores over 20 points.

More and more, the Knicks are slotting Porzingis at center. Against power forwards (where Porzingis plays in the starting lineup), he can be too slow to beat other fours off the dribble or stay in front of them. But he’s too quick for nearly all centers, and when he pulls opponents from the rim with his shooting ability, it opens up the floor for his teammates.

In a win over the Mavericks, Hornacek benched Joakim Noah for the second half, turning to prolonged stints with Porzingis playing center. In the last five games, the Knicks have turned to a five-man unit of Rose, Courtney Lee, Justin Holiday, Anthony, and Porzingis that has outscored opponents by 12 points in 11 total minutes. That unit is outscoring opponents by 38 points per 36 minutes. It’s a small sample size but suggests that the floor-spacing capabilities of the lineup will be effective.

Hornacek has said he doesn’t want to overuse Porzingis at center for fear his body won’t hold up against bigger, stronger centers. But juggling Noah’s and Porzingis’ minutes at center could become increasingly problematic.

Porzingis as a center, and centerpiece of the offense, was supposed to be the Knicks future. The early returns of the 2016-17 season suggest the future is already here.