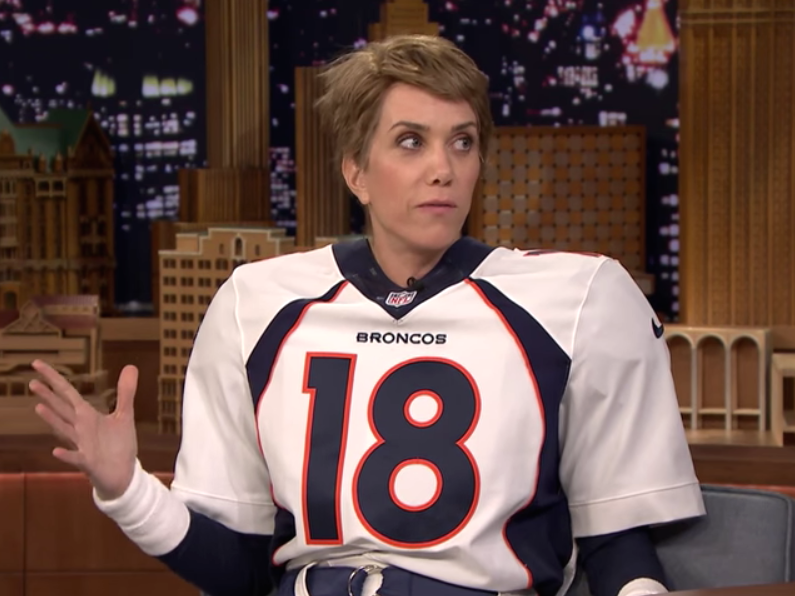 Kristen Wiig winged it as Super Bowl champion Peyton Manning on Thursday’s “Tonight Show,” and it was a valiant effort since she’s clueless about football.

Fellow “Saturday Night Live” alum and the show’s host, Jimmy Fallon, played along. When he asked her what she was thinking in the final seconds of the game, Wiig answers, “I’m thinking, uh, I’m so far from the line.”

That may have been the best answer she was able to give. She gets the final score wrong, has no idea who was named MVP, gets Manning’s college wrong, and says his major was “environmental science.” (The correct answers are 24-10, Von Miller, University of Tennessee, and speech communications, respectively.)

And just to prove how unprepared Wiig was to play Manning, Fallon took her through a lightning round of trivia on the player and a test of her football-throwing skills. It isn’t pretty.

By the way, this isn’t the first time Wiig has used an alter-ego on the late-night show. She’s previously appeared as basketball legend Michael Jordan and the Mother of Dragons, Khaleesi, from HBO’s “Game of Thrones.”

Watch the worst impression of Manning ever below: