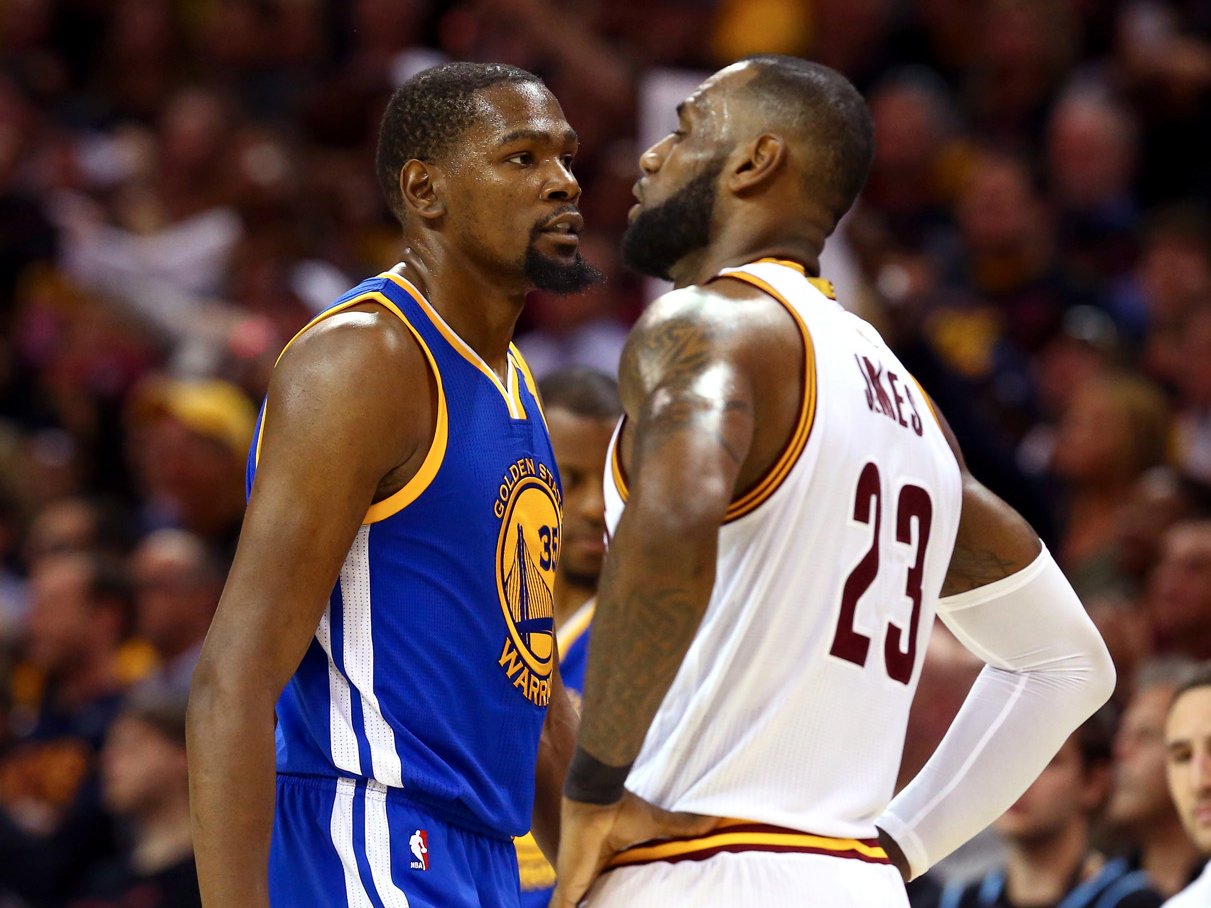 The Cavaliers-Warriors trilogy has ultimately been a flop because it’s become obvious that the Warriors are far better than the Cavs.

LeBron James and his Cavs teammates have made it clear throughout the series, these Warriors, with Kevin Durant, are not the same as the 73-win team the Cavs managed to beat in last year’s Finals.

Game 3 was a perfect example — the Cavs handed the Warriors their best shot, and it still wasn’t enough to beat them. Golden State escaped with a huge win to go up 3-0, essentially ending the series.

In the aftermath, there’s been some debate about the Warriors and whether their dominance is good for the league. They’re one win away from the NBA’s first ever 16-0 postseason. They’ve got a core of four All-NBA players in their primes and a fairly simple path to keeping them together.

What team can realistically knock off these Warriors and how long will it take?

On Thursday, LeBron was asked whether it was “fair” for the already-stacked Warriors to have added Durant and how it compared to when he joined the Miami Heat with Chris Bosh and Dwyane Wade in 2010.

“It’s part of the rules,” James said. “The best thing with Golden State’s situation is a lot of their guys are drafted. They drafted a lot of their guys. Three of their best players were already drafted, so they were able to hold on to them because they own the Bird rights, if everybody knows the [Collective Bargaining Agreement]. So they’re able to keep Steph, Klay, and Draymond and be able to go out and sign someone else like they did this past summer by just getting rid of a couple pieces … So that allowed them to go do that.”

James called his tuation in Miami “totally different” because they had to create the cap space to sign him and Bosh and had to clear their roster to do so.

James then addressed whether it’s good for the league.

“But is it fair? I don’t care. I mean, I think it’s great. It’s great for our league. Right now, look at our TV ratings, look at the money our league is pouring in. I mean guys are loving the game, our fans love the game. I mean, who am to say if it’s fair or not? No matter who I’m going against, if I’m going against four Hall of Famers … or if I’m going against two or whatever the case may be, I’m always excited to play the game. And I’m not one to judge and say if it’s fair or not if guys are adding players to their team. So that’s what you want to do. Is it fair that the New York Yankees in the ’90s was adding piece after piece after piece? I mean, if you have the opportunity to do that— is it fair that the Cowboys added Deion Sanders? I mean, listen. It happens. It’s sports. You have an opportunity to sign one of the players, and you can do it, go ahead and do it. Why not? If I become an owner, I’m going to try to sign everybody.”

James was also asked his thoughts on how Durant switching teams to pursue a championship compared to his situation when he left the Cavs for the Heat. James first said he’s “proud” of Durant and his success during his career, but said he thinks the situations are different because Durant was joining an established team and culture, whereas his Heat teams essentially had a blank slate. He then said he can still appreciate the subtle sacrifices Durant has had to make to fit with the Warriors.

“But I can definitely appreciate the simple fact of him either reshaping his game or just sacrificing maybe some shots here, sacrificing having the ball in his hands all the time. But it works for their team. I mean, who wouldn’t want to sacrifice playing on a Golden State team or a San Antonio team or a Cleveland team when you know the ultimate result is you can actually compete for a championship?”

Over the years, the Cavs and Warriors have become the NBA’s best rivalry, and this year’s lopsided Finals likely won’t help that.

However, it’s clear that the two sides have respect for one another, and that James isn’t bitter that a competitor jumped at the opportunity to improve their team.