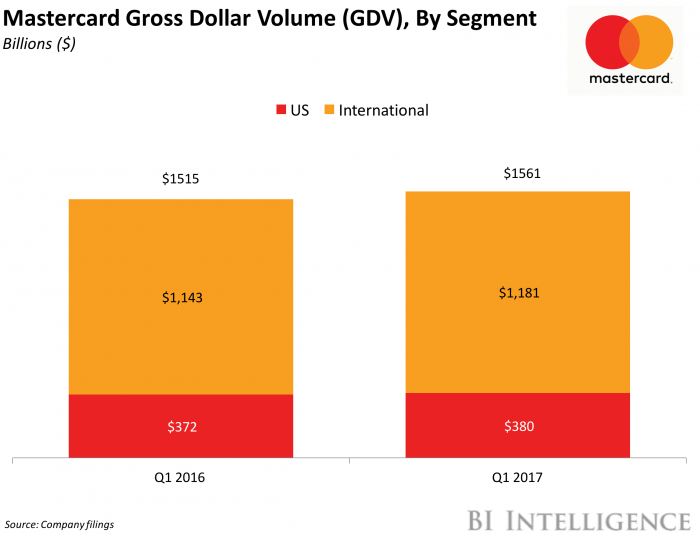 Mobile wallets are on fire

MasterCard has partnered with Oracle to grow digital reach

Visa and MasterCard are delaying the EMV shift for gas stations

MasterCard, the second-largest US card network, posted strong growth in its Q1 2017 earnings presentation. The company achieved a $288 million increase in net revenue to reach 12% year-over-year (YoY) growth, which is up from last quarter.

Revenue growth was more than sufficient to offset a bump in expenses. In its earnings release, MasterCard also announced the completion of its £700 million ($874 million) acquisition of UK payments technology company VocaLink, suggesting that strong growth lies ahead.

MasterCard’s most recent quarter and outlook are both bright.

Credit card rewards have become so popular in the US that issuers capture headlines just by launching a new rewards card. And with consumers now caring more about the type of rewards being offered than any other card feature, competition to offer the most lucrative and attractive rewards has intensified dramatically.

For consumers, the emphasis card issuers place on these cards has resulted in rewards becoming much more worthwhile and widespread, ranging from big sign-on bonuses to free travel. And with offers continuing to get better, consumers will continue seeking out the best rewards cards.

The value added from these cards is undeniable for issuers — in addition to increasing adoption of credit card products, the opportunity to earn rewards encourages cardholders to spend more money. This not only helps to drive up revenue, but also provides issuers an opportunity to mitigate any losses they may be feeling from the Durbin Amendment, which reduced how much fees issuers could charge on debt card transactions starting in 2011.

But it’s also important to note that offering such high-valued rewards comes at a price — Chase’s Sapphire Reserve card ended up reducing the bank’s profits by $200 million to $300 million in Q4 2016, according to Bloomberg. And as costs continue to rise, issuers will have to adjust to this new landscape by leveraging technology and partnerships to keep consumers engaged without sacrificing profits.

Ayoub Aouad, research analyst for BI Intelligence, Business Insider’s premium research service, has compiled a detailed credit card rewards explainer that walks through the new credit card rewards landscape, which now includes rising consumer demand for rewards, increased opportunity for issuers to drive up usage of their credit card products, and increasing costs. After discussing the evolution that has led to this current landscape, the report analyzes how issuers will have to adjust in order to continue reaping the benefits of offering rewards without sacrificing significant profits.

The choice is yours. But however you decide to acquire this report, you’ve given yourself a powerful advantage in your understanding of the payments ecosystem.