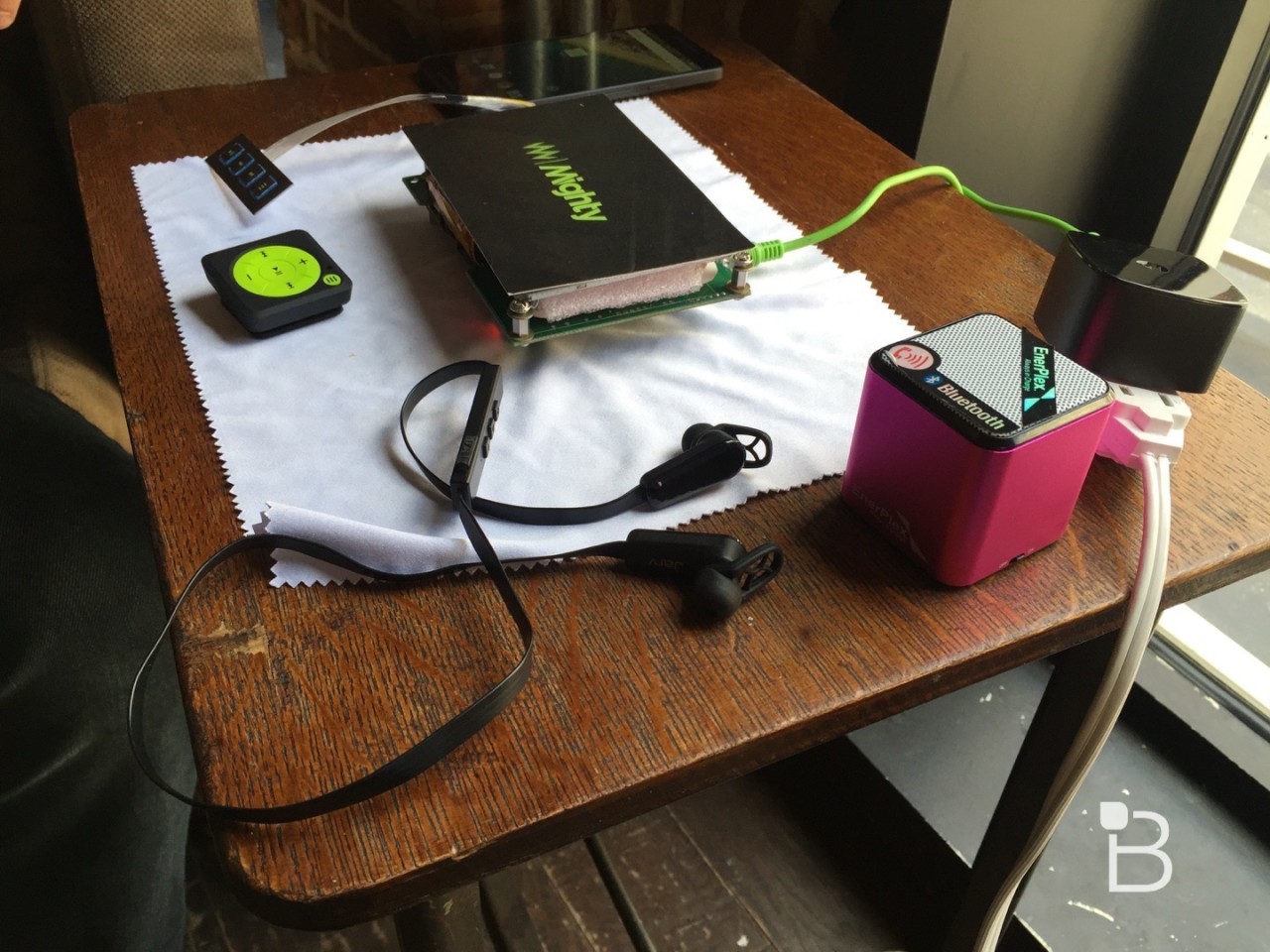 Mighty Audio almost seems to good to be true. This iPod Shuffle-inspired device can stream your Spotify playlists without an Internet connection, making it possible to leave your phone at home. So when the company offered to show me a personal demo, I had to say yes.

After experiencing the technology for myself I can confirm that it works, and it’s pretty cool, too.

The company just launched on Kickstarter this week, so the final product is still very much a work in progress. The current Mighty Audio consists of a beautifully-designed dummy unit and a bulkier computer rigged up to run the modified version of Android that powers the experience.

Let’s start with the sleek dummy unit, which should be a pretty good approximation of the final design. The matte plastic feels good to the touch, and the buttons are intuitive. Beyond the obvious options (forward, back, volume up/down) there’s a smaller fifth button in the top right corner. Pressing it switches between the different playlists saved to your device, which makes sense since many Spotify users organize their music into playlists rather than listening to full albums. If you want to hear a full album, just drag it into a playlist and you’re all set.

Mighty also sports a springy clip in back for attaching to your clothes. It includes an audio jack for plugging in headphones or speakers, along with Bluetooth support. It can also work with most Wi-Fi speakers, but the company says that adding support for some systems like Sonos will take extra effort.

As for the software, it’s designed to work silently in the background. It’s pretty much just Spotify’s Android app slightly modified and without a screen. During my brief demo, everything worked perfectly without any hiccups or issues.

Finally, there’s the Mighty app, which will be available for both iOS and Android. It’s designed to look just like Spotify’s own app, but instead of saving music to listen offline on your phone you’re sending it directly to the music player. The first time you boot up the app you’ll have to log in to your Spotify Premium account and name your device. After that, the entire process is extremely simple.

That’s pretty much it, which is kind of the point. Mighty Audio is designed to be so simple it barely adds any extra effort to your life. Instead of another device to keep track of and manage, it blends seamlessly into the background while providing a clever remedy for a specific problem that needs a solution.

Mighty Audio launched on Kickstarter earlier this week. The company is already close to hitting its crowd-funding goal, but you can still pre-order one for yourself at a nice discount via the source link below.