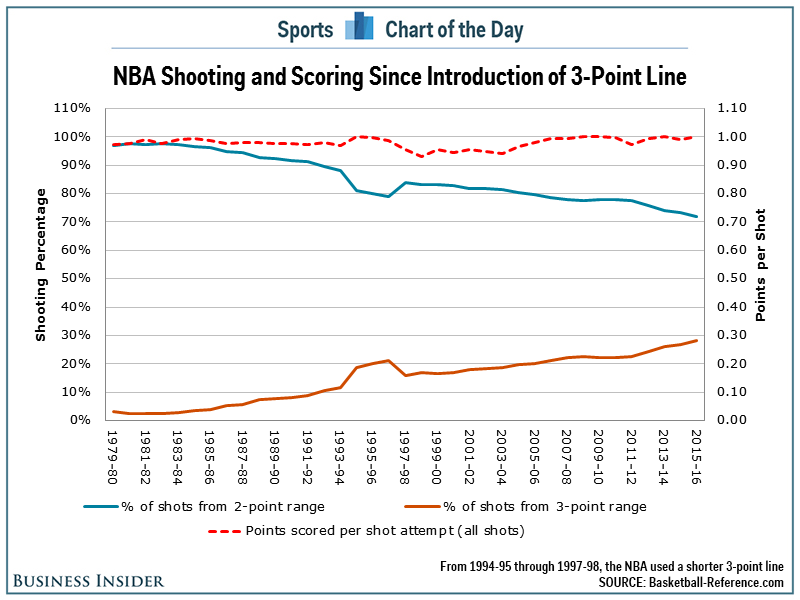 The NBA is in the middle of a revolution, one that seemingly has no end in sight. But as more and more teams live and die by the 3-point shot, something strange is happening, scoring efficiency has seemingly reached a peak.

So far this season, 28.2% of all shots have come from behind the 3-point line. The math is simple: because the shot is worth 50% more points and there is only a small decrease in shooting percentage from long range, teams score more points per shot from 3-point range than they do on so-called mid-range jumpers, also known as “long 2s” (the shots outside of the lane, but inside the 3-point line).

And yet, when we look at the chart below, we see that even though the percentage of shots coming from 3-point range continues to rise, the number of points being scored per shot overall is relatively unchanged over the last decade, fluctuating from 0.98-1.00 points per shot. As more players take 3-pointers, it is no longer just the elite shooters taking long shots. In addition, teams are more aggressive about defending the 3-point shot. The result is shooting percentage from 3-point rage is down slightly from 37% in 2008-09 season to 35% this year.

Teams have also realized that not all 2-point shots are bad. As defenses move to clamp down on shooters around the 3-point line, more space is opened up close to the basket where shooting percentages are higher. In addition, more teams are taking fewer long 2s. Overall, the percentage of 2-point shots that are made has risen from 46% to 49% over the last 12 seasons.

What is unclear is where this will end. Assuming no major changes to the rules (e.g. moving the 3-point line), eventually teams will find the right mix of 2-point and 3-point shots that maximizes shooting efficiency. Until then, it seems that teams are going to keep chucking up threes until scoring efficiency goes down.