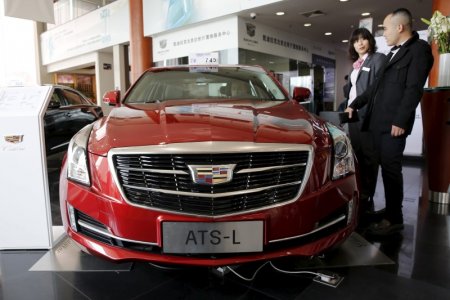 The General Motors brand is softening some hard edges on its angular cars to appeal to Chinese buyers used to the smoother lines of luxury cars made by BMW , Audi and Mercedes-Benz that dominate high-end sales in the world’s biggest car market.

After a slow start in China, Cadillac is poised to overtake Japan’s Lexus among the leading second-tier luxury brands, according to consultancy LMC Automotive.

The opening in January of its first dedicated factory in China should also help Cadillac make its cars more accessible to younger luxury buyers by avoiding a 25 percent import tax.

“In China, young buyers already dominate the luxury market. Since Cadillac is a relative newcomer … it was far easier to begin to cultivate the desired positioning for the brand from the get-go,” Cadillac President Johan de Nysschen told Reuters.

Cadillac’s China sales rose 17 percent last year to nearly 80,000 cars, or a 4.1 percent share of the luxury market, on the back of its ATS-L compact sedan and XTS large sedan. This year, de Nysschen has set a 25 percent growth target, to above 100,000 Cadillacs in China.

The former BMW and Infiniti executive predicts China could overtake the United States as Cadillac’s biggest market in 5-10 years. Cadillac sold around 175,000 cars in the U.S. last year.

While shopping for a car in Beijing, 26-year-old entrepreneur Ge Di said he preferred Cadillac over the more established German luxury brands.

“Mercedes, BMW, even Audi, skew more towards businessmen. The comfort level is a bit higher, but as a young person I care more about performance and design,” he said.

Ford , for example, considered closing down its Lincoln brand, which with Cadillac dominated U.S. luxury sales until the 1990s, but China has revived its fortunes. Buick, which GM had thought about discontinuing, saw record China sales last month.

De Nysschen – whose efforts to revitalize Cadillac include moving its headquarters from Detroit to New York’s SoHo – says the brand will produce a single model design for its cars rather than making different versions for the Chinese and U.S. markets. China will play a larger role in driving the future direction of its global image.

For example, Cadillac will stop designing separate long wheel-base cars for China, a mainstay of German luxury brands to appeal to chauffeur-driven Chinese businessmen. Instead, it will have one global “right size” design, de Nysschen said, somewhere between the previously stretched Chinese version and the shorter U.S. version.

The shift is partly driven by younger Chinese who want to drive themselves, he added.

“You will see a softening of some of the hard edges, and more three-dimension styling on the side of the car,” de Nysschen said, but cars will still be “instantly recognizable as Cadillac.”

Cadillac’s next China-produced car, the XT5 crossover SUV, will be aimed at a segment of the market that has defied the overall slowdown, with sales up 50 percent last year.

“We see (Cadillac) growing significantly faster than the luxury market overall, and we see a lot of growth opportunity in the SUV area,” GM President Dan Ammann told reporters in Beijing on Monday.