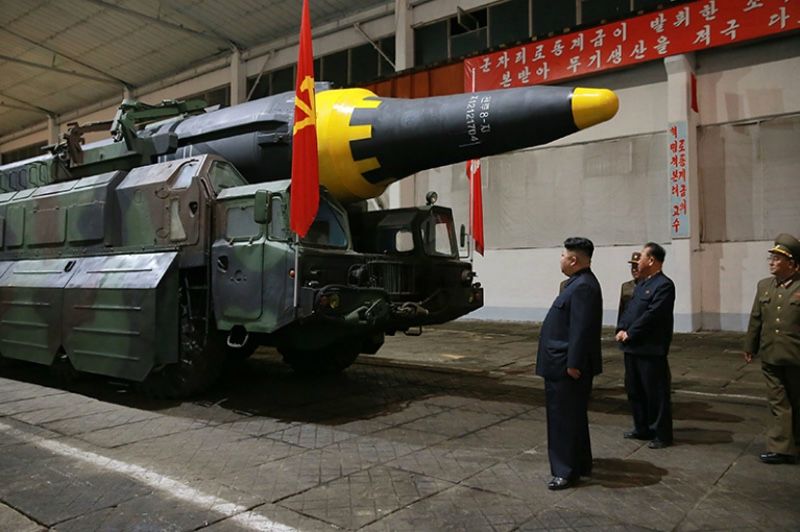 North Korean state media just released a video showing the country’s latest missile test, the first successful test in some time. The intermediate-range ballistic missile (IRBM) has been identified as the Hwasong-12, a new name given to the missile by North Korea. The missile was first put on display during a military parade on April 15, 2017.

Early reports indicate that the Hwasong-12 has a range of roughly 2,500 miles—though the missile largely proved its capabilities vertically, reaching an altitude of roughly 1,242 miles, but splashing down just 489 miles from its launch site.

The North Korean monitoring website 38 North, an organization run out of Johns Hopkins University, says that the newly demonstrated missile “represents a level of performance never before seen from a North Korean missile.” But the site also stresses that this missile can’t reach the US mainland.

What would change the strategic balance is an ICBM capable of reaching the US mainland. This is not that missile but it might be a testbed, demonstrating technologies and systems to be used in future ICBMs like the KN-08 and KN-14. A full three-stage KN-08 would be very unlikely to work the first time it was tested, and the failure would be both expensive and very provocative. This missile would allow North Korea to conduct at least some of the testing necessary to develop an operational ICBM, without actually launching ICBMs, particularly if it includes the same rocket engines.

The North Korean state news agency KCNA quoted Kim Jong-un as saying that, “if the United States were to face our republic with a harsh, miserable blunder, the US would not be able to suffer the greatest disaster ever.”

The UN Security Council is set to meet on Tuesday at the request of the United States, Japan, and South Korea. It’s yet unclear what actions the US may call for, but the White House statement on the issue was peculiar in that it was very concerned with Russia.

With the missile impacting so close to Russian soil—in fact, closer to Russia than to Japan—the President cannot imagine that Russia is pleased.

North Korea has been a flagrant menace for far too long. South Korea and Japan have been watching this situation closely with us. The United States maintains our ironclad commitment to stand with our allies in the face of the serious threat posed by North Korea. Let this latest provocation serve as a call for all nations to implement far stronger sanctions against North Korea.

Curiously, the New York Times conducted a new poll that shows Americans who can find North Korea on a map are more in favor of diplomacy. The map produced for the poll showing where Americans thought North Korea might be located was downright embarrassing.

Americans as a whole may not be able to find North Korea on a map, but they’re certainly in favor of tougher sanctions and even cyberattacks on the country. There’s less appetite for all out war, something that is completely unnecessary given the fact that the US has plenty of missiles of its own, should North Korea do anything stupid.

In fact, just a few weeks ago, the United States tested its own missile, shooting a Minuteman III from Vandenberg Air Force Base in California some 4,000 miles in North Korea’s direction, landing in the Marshall Islands. The April 26, 2017 test wasn’t exactly subtle.

With any luck, we’ll avoid a war. But let’s just say that with Donald Trump in charge, a lot of people aren’t feeling very lucky.

North Korea Just Had Its Most Successful Missile Launch Yet

What Time Is the New Korean War?