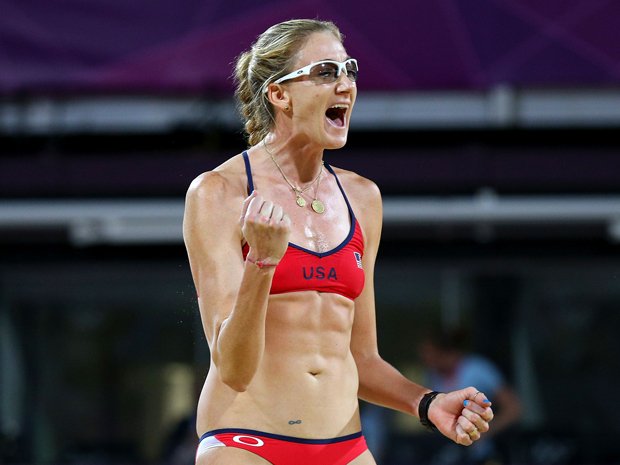 Kerri Walsh-Jennings and her partner Misty May have been synonymous with the sport of beach volleyball for well over a decade.

After failing to drop a single set en route to the gold medal in Athens in 2004, the duo rattled off an impressive extended run that saw them win 108 consecutive matches, recapture gold in 2008 in Beijing (where they again failed to drop a set), and again in London in 2012.

May retired following the London Olympics, but Walsh-Jennings (37), is showing no signs of slowing down. Now competing with April Ross, she is yet again a favorite to capture gold on the sand this summer.

With the Olympics a little more than five months away, Business Insider caught up with Walsh-Jennings to discuss her career, her training, the problems facing Rio, and more.

[Lightly edited for length and clarity]

Business Insider: You are coming off a recent surgery on your shoulder, the fifth of your career. I first wanted to ask how you are feeling, and how the surgery is affecting your training leading up to Rio.

Kerri Walsh-Jennings: Yeah, so I had my surgery September 10, and I feel like it was like three years ago. [Laughs.] At some point you’re like, gosh, this rehab is never going to end, and then all of a sudden I’m full strength and I’m about to go to my first competition. So I feel really great. My support system, in my surgeon, my P.T., my pilates, my weightlifting, everything that I’m doing to make my body and my mind stronger is just, you know, has been on point. So I feel very prepared for the journey to qualify, and the journey to wear the gold medal.

BI: What is your typical training day like? How do you prepare to compete on a surface like sand?

KWJ: Well there’s only one way to prepare for playing beach volleyball, and that’s by getting in the sand. But offseason is really important because generally I’m staying off the sand and getting my feet under me, and it’s really important for my body to know what it feels like to have sound footing under me. And then at some point I go back on the sand to get my sand legs. Because it takes a good month for my legs to catch up with everything, with the displacement and all that stuff. So right now we’re training on the beach six days a week for practice, and that’s generally about two and a half hours. And then I’m doing pilates three times a week, I do a program called Fast Twitch twice a week, basically my lifting and strength training, I’m working with a spine specialist, which has been a new addition for me since my surgery to really get some great support for my shoulder, and I really love the way my body feels. It takes the pressure off my lower back and kind of just shares duties, really, with my body.

And then I’m doing mental training as well. So, you know, body, mind, and spirit — everything is being addressed, every single day. Generally I’ll have three training sessions a day.

BI: Wow, it certainly sounds like you are training around the clock. And you also have three children. How do they factor into all of this? How have they changed your preparation? KWJ: Well, being a working mommy is something I’ve always wanted to be. My mother is my biggest role model and she showed me how to do it right. She was very present in our lives and has a great career of her own. Same with my father. So I knew it was possible going in to stay closely connected to my children while also chasing big dreams. And it’s given me great perspective. It makes me really focused and efficient, which — I was focused before I had babies but I wasted a lot of time. Prior to having babies I thought I thought I was so busy and now I realize just how ignorant I was. [Laughs.] Because, you know, I had nothing but time.

But they’ve made me better. They hold me more accountable for who I am and who I aspire to be, and they make me want to be better. And that’s not just as a mommy, but as a woman and as an athlete.

BI: What is your nutrition like as an Olympic athlete?

KWJ: Iwant to be the best role model I can be for my family. I want my husband and I to be the ones our kids look to for guidance, to be the great role models that I had with my parents growing up, so for as hard as we work, I want our kids to see us having fun. I want our kids to know that we have to feel our bodies. And nutrition is a huge part of that. I want to be efficient and effective in everything I do. I start every day with a protein shake, with my vanilla Almond Breeze, and my kids start their day the same way as well. [Nutrition] is a huge piece of the puzzle. It’s not just about working hard and being physical. It’s about being smart and mindful of what’s going in and out of our bodies. And also taking the time to enjoy things, and to appreciate the process. BI: The Zika virus has been the hot-button issue in the build-up to Rio. When you won the gold medal in London in 2012, you were newly pregnant. How do you think female athletes should prepare for Rio, knowing what we now know about Zika?

KWJ: For me, I think educating myself has been huge. I feel like the way it’s presented in the media is that if you got to Brazil you’re flipping a coin on your health. I don’t think it has to be that way. If I were wanting to have a baby right after the Olympics I would take precautions, and then when the Olympics were over I would get tested to make sure I didn’t have the virus in me, and then I’d go for it. I would take all the precautions, I’m going to bring my natural remedies, keep the mosquitoes away naturally and I’m going to bring my DEET. I’m going to do my part. And again, it’s something, when a baby is involved you don’t want to take any risks. So I would just exercise a lot of caution and do my part and then get tested and go for it.

BI: Are there other worries you or other Olympic athletes have about Rio?

KWJ: Well we’re going to Brazil. And every time I’ve gone to Brazil I’ve gotten sick upon return. You know, it’s just a different situation there. And I take every precaution — eating cooked foods and staying away from tap water, brushing my teeth with bottled water — and yet I still manage to get sick. So I’m just going to stay on point, bring my probiotics. Ideally we’re going to stay at an American hotel. We just want to take every precaution. Because if you get sick out there, and you’re playing in that hot sun and you get depleted, it’s going to be a problem. So that would be the only other thing I think that athletes on a whole are going to be worried about. But again, we have to do our part and take every precaution and be smart. BI: At the 2000 Olympics you competed with Team USA’s indoor volleyball team. And then at the 2004 Olympics you switched to beach volleyball. What prompted that switch?

KWJ: At the point when I switched from indoor to beach I had been playing indoor for 12 years. And, to be honest, to make a living indoors you have to go overseas. I am such a family girl and just wanted to be home, so that didn’t appeal to me. Misty May was looking for a partner, I was looking to stay at home, and the beach just came calling. And mostly I stuck with it because I loved the challenge of it, but also just the autonomy of it. It’s two on two, just you and your partner, you’re not one of the herd. And the lifestyle is unbeatable.

BI: I’m curious to hear more about partner dynamics. You and Misty May were obviously so dominant for so long, and part of that dominance seemed to have something to do with how close you two were. How did you two establish such a solid relationship?

KWJ: I think from day one we just had a synergy about us. We had a flow. And then we had twelve years to build off that. I firmly believe that when you have a foundation of respect, love of what you’re doing, and a shared vision, so much is possible. Misty and I had something magical, and I think at the basis of that was so much trust. Especially in the really competitive situations where it really felt do-or-die, we were unbreakable. We always stuck together, even if we lost we were together. And that’s my mission with April. We’re working so hard, but it’s something you cannot force. It’s a process, and April and I are well into that process. And it’s going to be really fun to go and do it our way. But trust is hugely important on any team, no matter how big or small it is. BI: Having already played in four Olympics and won three gold medals, you are obviously a pretty popular athlete, and yet your sport gets little attention outside of the Olympics. How much of a responsibility do you feel you have in growing the sport of beach volleyball?

KWJ: I take my role as an ambassador for the sport, and as a role model for boys, girls, mommies, daddies — whoever it is — very, very seriously. I know the impact my role models have had in my life, and I’m in a really beautiful position to be able to be that for others. As far as my sport is concerned, my mission is to make it as big as it deserves to be. We’ve been growing, it’s just not as noticeable. The NCAA picked beach volleyball up to be a championship sport, and it was the fastest test sport that’s been adopted. That’s a really big deal for our sport because that just means the USA system is going to have a feeder system from the college system.

BI: You have the chance to become the second woman after Lisa Leslie to win a gold medal in four consecutive Olympics in a team sport. How much are you thinking about that as you prepare for Rio?

KWJ: April and I still have to qualify, but what a great opportunity. If and when we do [qualify], we’re going after gold and we’re going after nothing less. The legacy will take care of itself as long as we do our job to the best of our ability. And I have so much faith in us and I mean I honestly feel like my job since I was 22 has been to be an Olympian. That’s a very privileged job and I love it with all my heart. I’m planning on playing my best volleyball to date throughout 2016 and certainly during the Olympics. But yes, I aspire to join Lisa Leslie and that really amazing feat of hers, and I will be proud to fight for that.