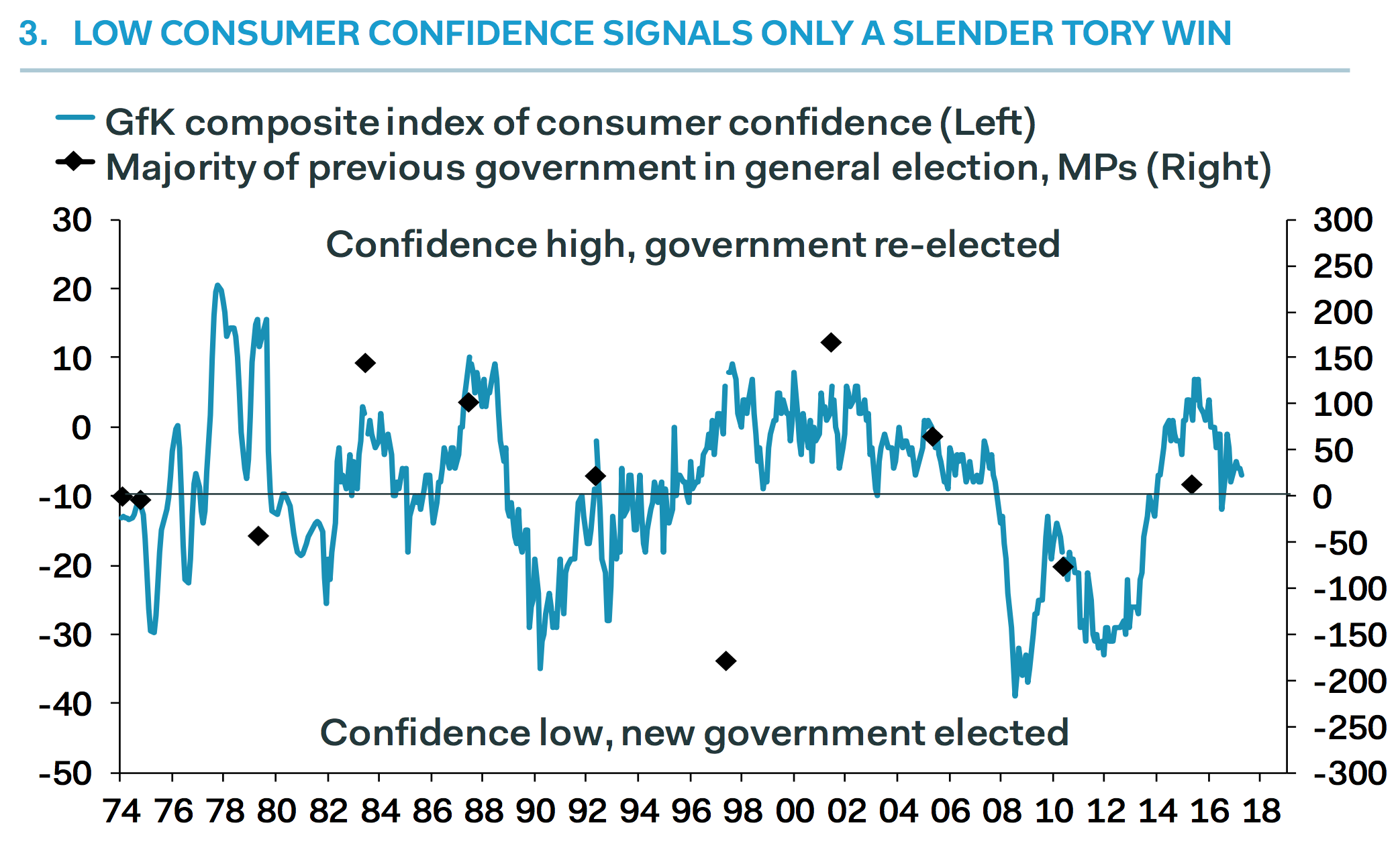 On May 19, three weeks before the general election, Pantheon Macronomics analyst Samuel Tombs published this chart showing the relationship between consumer confidence and the size of a UK government’s majority in the House of Commons after a general election. He predicted “only a slender Tory win”: On the same day, the opinion polls showed the Conservatives ahead of Labour by a margin of 47% – 31%. To everyone else, it was a given that Theresa May would secure a landslide victory.

For Tombs, it was always a squeaker.

He republished the chart several times in notes to clients in the run-up to the election, most recently on June 5 as part of a larger presentation arguing that the Tories would not improve upon their result in 2015, when they won only a narrow margin of 12 seats. Here was his data on that day: The economic data, Tombs argued, pointed to an electorate that was unhappy — because of low pay and insecure work — and therefore could not be expected to vote enthusiastically for a sitting government. (Business Insider first reported on Tombs’ theory on May 30.)

It’s important to remember that Tombs was in a very small minority of people predicting that May was in trouble. It feels obvious that May failed now. But three weeks ago people were talking seriously about the Conservatives scoring a 100-seat majority. Tombs has been a longtime bear on the UK economy. His notes have frequently been dismissed as too bearish: In a typical Tombs note, bad news always proves his case and good news only serves to show how much steeper the impending fall will be.

This time, he was right. The economic story behind the voting data is now, less than 24 hours into the minority May era, the conventional wisdom. As his competitor Martin Beck over at Oxford Economics said: “It was the economy.” He explained (emphasis ours):

“In explaining the election result, the commentariat has been quick to cite a variety of factors, including a very poor personal campaign from the Prime Minister and the opportunity for ‘Remain’ supporters in last year’s EU referendum to group behind a party offering a softer form of Brexit than the Tories. However, it is difficult not to attribute a big role to economic factors, with the chickens of an economic recovery that has been noticeable by its absence for many people now coming home to roost. The blunt reality is that GDP per person is only marginally higher than the level in 2008, corresponding to the weakest economic expansion in the post-war period. Furthermore, average inflation- adjusted weekly earnings are lower than in 2008, the latter development unprecedented over any equivalent period in the last 150 years.”

Tombs has another prediction based on the result of the vote: The government will be forced to abandon its “hard Brexit” plan — in order to keep more of the economic benefits of being close to the EU — and the pound will strengthen in value:

“The Conservatives, however, likely will be forced to back down from the hard Brexit stance that dominated their campaign, while Labour will maintain its soft Brexit position. So, while political uncertainty over the coming months likely will weigh on the pound, we continue to think that a soft Brexit is the most likely outcome, suggesting sterling could appreciate significantly over the medium-term.”