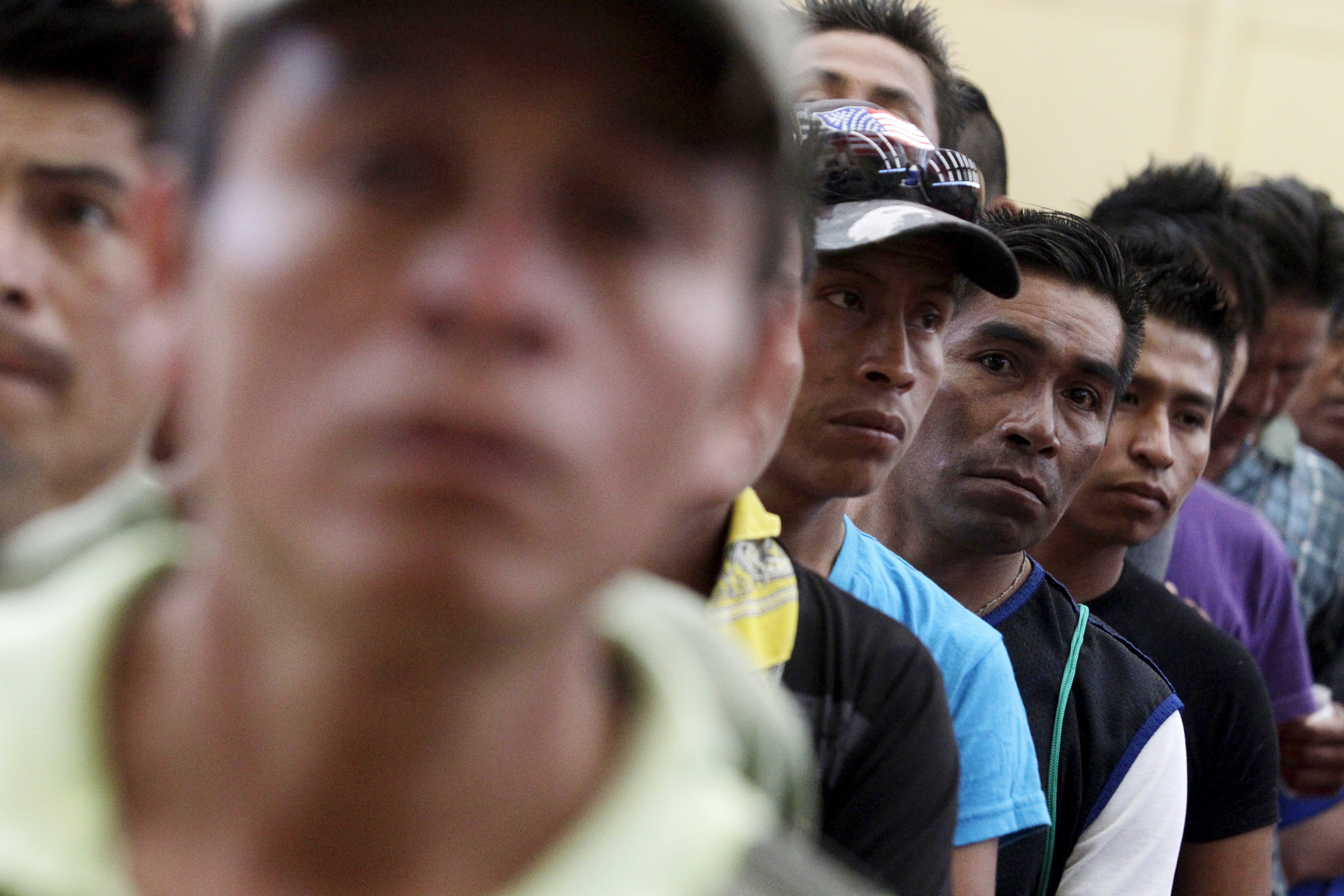 REUTERS/Daniel BecerrilField laborers stand in line at a gym turned shelter in Saltillo, Mexico, August 21, 2015. They were staying at the gym after being rescued from farms where they worked under conditions of semi-slavery, according to local media.

Many of Latin America’s poorest workers have climbed out of poverty in recent years, but their wages continued to be insufficient to classify them as middle-class workers, according to World Bank data cited by a UN release.

Laborers earning between $4 and $10 a day make up 38% of the region’s population. These workers, according to the World Bank, are considered “vulnerable.”

The poor in Latin America, those who make less than $4 a day, are 24% of the population. Middle-class workers are those making between $10 and $50 a day.

Latin American workers who have moved out of poverty to eke by on between $4 and $10 a day have done so largely because of the region’s strong economic growth in the first decade of the 21st century.

With growth in the region forecast for 0.1% in 2016, the World Bank cautions that many of the region’s vulnerable workers could slip back into poverty.

Economic progress in the region has already started to slow in recent years. In 2015, a UN commission reported “that 28% of the region’s population, or 167 million people, were mired in poverty in 2014.”

“It seems the recovery from the international financial crisis was not taken advantage of sufficiently to … reduce vulnerability from economic cycles,” said Alicia Barcena, the head the UN’s Economic Commission for Latin America and the Caribbean, in January 2015.

Many countries in the region have seen inequality grow and wages struggle to keep pace with costs of living.

In Venezuela — facing a host of economic and social problems — President Nicolas Maduro announced the country’s 32nd minimum-wage increase in 17 years, bumping salaries and pensions up 20%, despite the country’s annual inflation rate of 63.4%.

In Brazil, wracked by economic stagnation, the government announced an 11.7% boost to the minimum wage in December 2015, just above the country’s 10.6% inflation for that year. President Dilma Rousseff’s opposition criticized this hike as an effort to raise her flagging popular support. Thomson ReutersBrazil’s President Dilma Rousseff during a meeting with leaders of the Social Democratic Party (PSD) at the Planalto Palace in Brasilia.

The Colombian government raised the minimum wage 7%, slightly more than the country’s 6.11% inflation in 2015.

Colombian workers’ unions, however, decried this raise as insufficient, considering the record-breaking decline in the value of the Colombian peso, which fell from 2,400 to the dollar at the start of 2015 to 3,300 to the dollar by the end of the year. This weakening drove a 7.26% increase in the cost of living, according to the Americas Society.

Perhaps the most fraught relationship between compensation and living conditions is in Mexico. REUTERS/Edgard GarridoProduce pickers wait for a bus as they travel to work in a neighborhood in San Quintin in Baja California state, Mexico, March 31, 2015.

Most workers earning Mexico’s minimum daily wage in 2015, 70.1 pesos, or $3.78 at current rates, would have had to work for just over 37 days a month to earn the government’s set monthly amount for well-being at the time, 2,628 pesos, or roughly $144 at current rates.

In 2016, the government raised the minimum daily wage 4.2% to 73.04 pesos, or $3.94. The percentage increase was twice the 2015 inflation rate, though the recent decline of the peso against the dollar has left many Mexicans hurting.

However, Mexico’s minimum wage remains one of the lowest in the region, and the country’s working poor, the percentage of the population who can’t feed a family with the household’s income, rose from 32.9% in the third quarter of 2008 to 41.4% in the first quarter of 2015, according to El Daily Post. REUTERS/Jorge Dan LopezA young woman carries a baby while begging amongst the cars on a busy street in downtown Mexico City, March 2, 2011.

And inequality remains a persistent problem throughout the region — and in Mexico in particular.

A 2015 report found that 2,540 of Mexico’s nearly 125 million residents held 43% of the country’s individual wealth, a disparity that may further deprive the lower and middle classes in the country of whatever economic gains the region makes.

“In the most unequal economies, poor people tend to receive fewer benefits from economic growth,” according to El Daily Post.