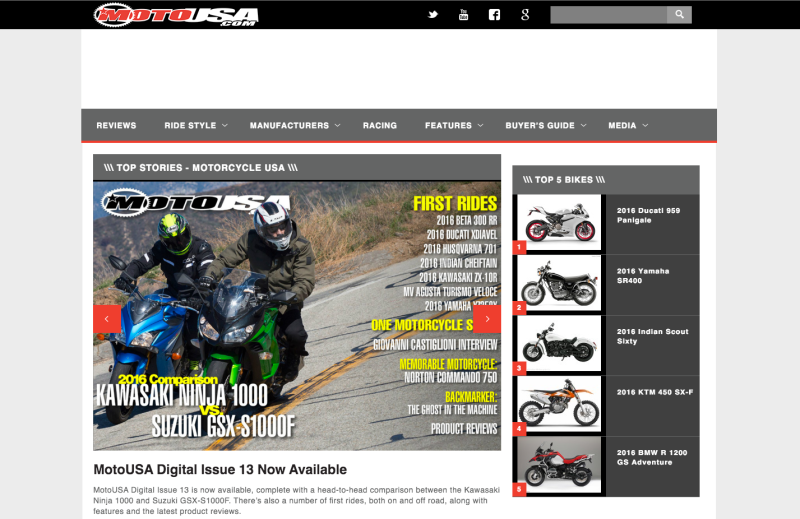 Motorcycle USA has been a staple in the motorcycle media field for 20 years. After this coming Friday, they will be no more. The only thing is, I’m not sure if this will make waves in the industry, or if it’s just a sign of things to come.

Even after Motorcycle USA quit making a physical magazine, it was still a major player in the motorcycle media space. In part that was because it was owned by Motorcycle Superstore, which is one the biggest online retailer of motorcycle gear. That, and it’s always had some amazing writers and personalities on staff.

Writer and editor Adam Waheed is one of my favorite guys to ride with and talk to about bikes, and his enthusiasm for anything with two wheels is infectious. For years I’ve been saying that if MotoUSA would let Waheed be Waheed in those videos of theirs, no one could touch them. I mean, just look at the mustache he donned for the Ducati Scrambler review; his suit from this 959 Panigale review was what inspired me to get my new orange Spidi suit. He’s a talented rider and amazing personality in a field void of much character.

Recently, LDI (Tucker Rocky) moved the bulk of Superstore’s operations to Texas, but left Waheed and some of the guys out West to be near the motorcycle manufacturers. Even more recently, Superstore began to put more resources into their Fuel Rider Resource Center, which it their version of RevZilla’s Common Tread. In other words, a sales site’s attempt at a content blog.

I’m guessing MotoUSA always struggled with separating honest, opinionated, and unaffected content from the sales side of things—something that was certainly a problem when I was with RevZilla. The same will be even harder as Superstore tries to put their focus into this Fuel blog.

Oddly enough, CycleNews seems to be unaffected by the move. No news yet as to whether LDI will sell that off or try and keep it running, but my guess is the former. They recently brought over Rennie Scaysbrook, an incredibly talented writer and rider from Australia, and its more focused direction has earned it a slightly different role in the media world, even if smaller than some of the big players.

While this could be taken as just a sign of things to come, I’d like to think this is more likely an isolated case based on a company who was unwilling or unable to change with the times. Motorcycle magazines are no longer the place you need to turn to for specs, thanks to Google and the OEM’s nice websites. Sites like ours and MotoUSA now need to be full of things you can’t learn from Google or the manufacturers.

Many sites still hold onto the need to be completely objective and try and remove their opinions from the news. If you like our brand of content, you likely believe quite the opposite (though I try and be clear about when something is skewed based on my opinions.)

My colleague at Gawker recently wrote about the modern state of journalism, I thought it was an excellent read and incredibly applicable to the motorcycle and auto fields. While creating content that has some evaluative nature to it (and isn’t paid for by the manufacturers) gets more and more difficult, outlets have to find more and better ways to entertain and connect with readers to keep you coming back and sharing content. People who struggled with that, like MotoUSA, will likely struggle and possibly die out.

I certainly wish the best for the editors and photo/video team at MotorcycleUSA.com. They’re a great and talented group of people who deserved to be better supported from their site and whose shoulders the blame for the site’s failure does not rest on.

I look forward to seeing their work wherever they end up next.