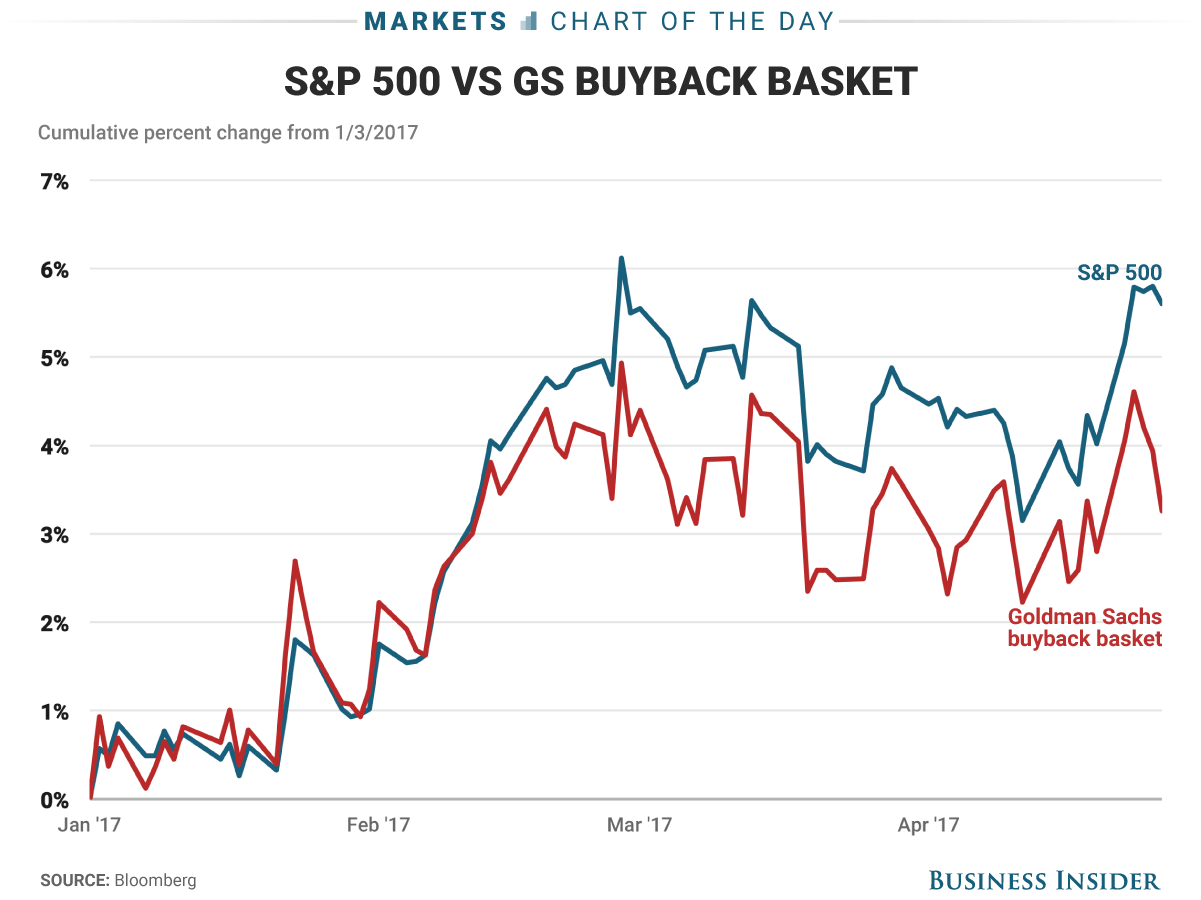 Since the start of the eight-year bull market, one of the most reliable drivers of stock returns has been the willingness of companies to repurchase their own shares.

Those buybacks have been a win-win for corporations who want to push their stock higher while also signaling to the market that they see shares as undervalued. It’s a tactic that can generate returns during lean times, like the S&P 500’s five-quarter earnings slump, a period that saw the index still grind out a 1.5% gain.

But the heyday of share repurchases may be coming to an end as investors stop rewarding the companies that use them the most.

A Goldman Sachs basket of stocks with the highest buyback yields has trailed overall S&P 500 performance by 2.3 percentage points so far in 2017. This is an enormous turnaround: The same gauge beat the benchmark by more than 100 percentage points from the start of the bull market through 2016. In response to this dwindling efficacy, companies have scaled back repurchase activity. Executed buybacks have dropped 20% in 2017 compared to the same period a year ago, while authorizations for new programs are occurring at the slowest pace in five years, data compiled by Goldman Sachs show.

One reason buybacks have fallen out of favor is that shares have simply gotten too expensive. The median stock in the S&P 500 currently trades at the 98th percentile of historical valuation across multiple metrics, according to Goldman data.

“Experience shows that firms repurchasing shares at extremely high valuations regret those actions when the stock price inevitably de-rates,” the firm’s chief US equity strategist David Kostin wrote in a client note. “Trends in the use of corporate cash suggest that managements increasingly embrace this view.”

The firm still forecasts that buybacks will mount a comeback of sorts to climb a modest 2% in 2017, but that’s a far cry from previous estimates calling for 30% year-over-year growth.

One remaining wildcard for the future of buyback activity is the repatriation tax holiday that’s been proposed by President Donald Trump. The logic goes that if large multi-national companies are permitted to bring profits back into the US from overseas at a low one-time rate, there would be a massive influx of cash. That money could then, in turn, be used to buy back shares.

It’s an outcome foreseen by Howard Silverblatt, senior index analyst at S&P Dow Jones Indices LLC, who thinks capital created by the tax holiday would be used for buybacks even more than dividends, another popular vehicle for excess corporate cash.

However, with Trump and his fellow Republicans thus far providing scant details about such a plan, it might be a while before investors can see this dynamic in action, which is another possible explanation for the waning enthusiasm around repurchases.

This doesn’t mean investors have given up their search for yield — they’re simply looking elsewhere. That means buying stocks that offer the highest expected dividend growth, a group that’s outperformed the S&P 500 by two percentage points so far this year, Goldman data show.

RBC Capital Markets is similarly enthusiastic about the companies offering the biggest quarterly cash distributions. Such stocks are more concentrated in “old economy” industries like retail, industrials and technology, they say.

That means those companies will actually benefit from rising interest rates, rather than lose luster as fixed-income securities grow in appeal — a fate that normally befalls more traditionally defensive high-yielders like utilities and phone companies.

SEE ALSO:Here’s how the ‘biggest tax cut in history’ could impact stocks