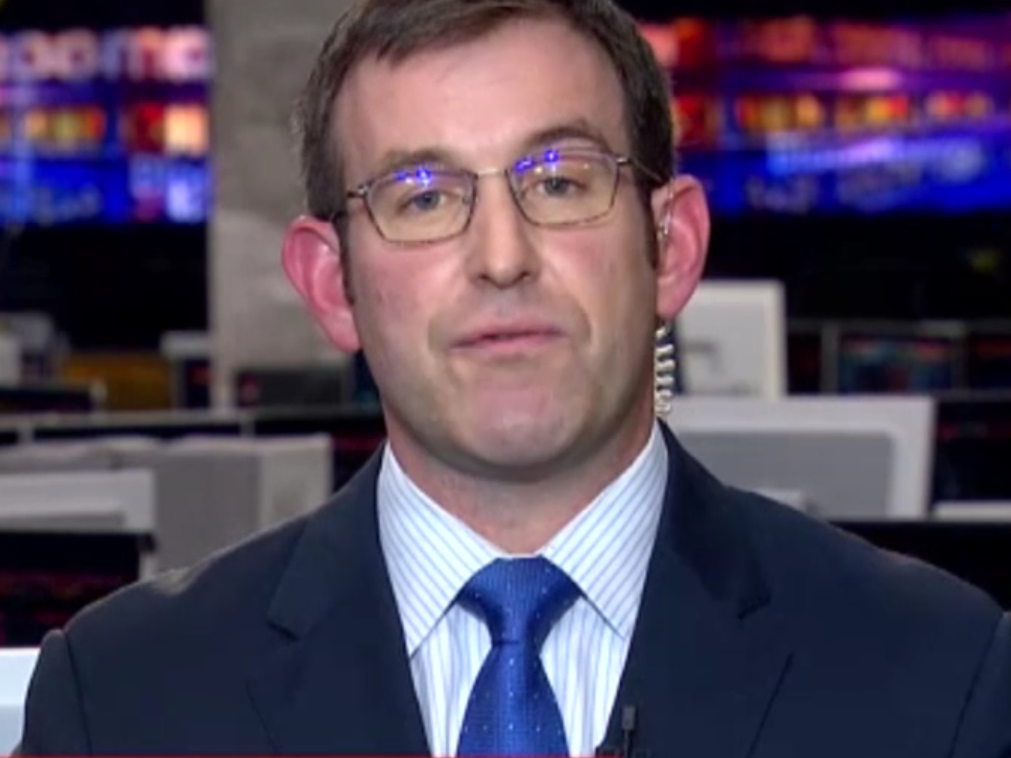 Leland Miller is the founder of China Beige Book, a highly coveted survey of what’s going on with China’s economy.

We asked him about the country’s future, whether or not things are actually stabilizing, and what hedge fund billionaire Kyle Bass is missing with his famous prediction that the country will have a banking crisis next year.

Linette Lopez: The Chinese are trying to pivot their economy from one based on manufacturing and industry to one based on services and domestic consumption — are they making a lot of headway there?

Leland Miller: No.There are two ways to look at this, either as a multi-year trend line or in terms of a Q3 snapshot, and neither of them suggest the Chinese economy is successfully rebalancing.The third quarter was particularly telling.China Beige Book data showed the growth drivers of the economy last quarter were exclusively “old economy” sectors — manufacturing, property, commodities — while the “new economy”—services and retail, for example — both weakened, quite notably in the latter’s case. Q3 is only one quarter, but it was a case study in how not to rebalance an economy.

Lopez: What do you think is the biggest misconception about the state of China’s economy right now?

Miller: That recent data confirm China is once again “stable,” and therefore not something that will likely disrupt portfolios or trading strategies over the coming year.

The new “stability” narrative goes something like this: After a tough early 2016, China recovered nicely in Q2 and then basically saw a repeat performance in Q3 (as evidenced by static official GDP and the recent PMIs).With a politically sensitive Party Congress scheduled for next fall, Beijing couldn’t be foolish enough to allow conditions to falter in the run-up, considering they can always use stimulus at will.So, all signs point to Beijing ensuring a continuum of stability between now and the end of 2017.

The problem is, this whole “China stability narrative” is flawed.From 30,000 feet, our Q3 headline revenue data also looked stable — but the underlying metrics from our 3,100+ firm survey were anything but: Nationwide we saw weaker profits, deteriorating cash flow, a complete reversal of rebalancing priorities, an increasingly stressed property sector, and a notable one-off jump in leveraged borrowing.

The quarter wasn’t a disaster by any means.But it’s critical to understand that stable headline numbers are not the same thing as a stable economy.If Beijing does indeed wish to ensure stability at all costs over the next year, it will be far more difficult, and much more costly, than investors realize.Too many investors are conditioning themselves to view any volatility over the coming year as a major surprise.That likely won’t end well.

Lopez: What are your clients asking you about these days? What are their concerns?

Miller: Over the past few months clients have been particularly focused on two (related) areas of the economy: property and commodities.In terms of property, everybody knows there is a bubble, but there really isn’t any consensus on how best to assess its fragility.China Beige Book data provide an edge here because we track cash flow, and in Q3 we saw this gauge slide deep into the red in each of our five property sub-sectors.When the so-called “moneyball” of trapped domestic capital does leave property — and that time is fast approaching — we’ll have advance notice of its departure.

Commodities is even more fascinating.There appears to be strong conviction amongst many hedge funds right now that the price rebound in coal is due primarily to the Chinese government finally following through on its pledges to shut down capacity.(It’s the same thesis, more or less, for steel and aluminum.)But is this really happening?China Beige Book’s capex and net capacity tracking data suggest a very different dynamic is at play, with major implications for next year.In other words, chances are rising that there could be even more buy-side blood on the street by early 2017.

Lopez: The Chinese government has said that it is going to try to be more transparent in its dealings — at least in terms of its economy. Have you seen any improvement there? Has data become more plentiful/reliable?

Miller: There are a lot of misconceptions over the quality of Chinese data.As everyone now knows, or should know, certain types of official data are simply laughable on their face — employment data, for instance.

A second category of data may provide some clues on directionality, but suffers from a variety of methodological and time-lag flaws, and is often manipulated anyway.GDP falls into this category.Western analysts use them, but they often do so (quite justifiably) with an asterisk.

Finally, there is a category of data which when used properly can provide some measure of helpful insight.I would put newer metrics such as Total Social Finance (TSF) into this category.However, even these data rarely say what analysts think they say.For example, annual TSF figures, notwithstanding some major methodological problems, are a substantial upgrade from their antecedent, which was bank lending.But when Beijing mandated its Statistics Bureau (NSB) provide that data monthly, the series became worthless — the NSB is simply not able to effectively break the data down into those shorter time periods.The NSB knows it, and most China watchers have caught on as well.But it’s astonishing how often monthly TSF volatility is treated by analysts as meaningful, when it’s usually just noise.

In sum, they are making some efforts to expand and improve official data, at least at the margins.But because political sensitivities predominate, the overall reliability continues to get worse, not better.

Miller: That depends entirely on how you define “crisis.”Today, the banking system is effectively insolvent: It’s awash in non-performing loans; firms no longer respond to lower interest rates, and haven’t for a long time; SOEs don’t pay back their loans; local governments don’t pay back their loans; and most of shadow finance is a Ponzi scheme backstopped by implicit government guarantees.So, some might say, not unfairly, that we’re already seeing a crisis unfold.

However, if we’re to assume he means true contagion, then that is a far bolder call.The central problem with all of these hard landing/mega-devaluation theses has always been the presumption that China’s banking system is vulnerable to the same type of banking crisis that investors like Kyle successfully forecasted in the US and Europe.

That’s just not the case.China is a non-commercial financial system, which makes it much less likely to suffer all of the so-called “falling dominoes” that you might see play out in commercial financial systems: Widespread deposit flight out of banks, counterparties refusing to deal with each other, insolvent institutions taking down the system, etc.Leaving aside that Beijing has much greater firepower to push back against capital outflow pressures than just its oft-quoted forex reserve number (there is plenty more to tap inside the banking system, for instance), Beijing can simply move money around the system at will to ensure the most pressing problems are dealt with as they arise.

Make no mistake, this is not a recipe for success.In fact, it is inherently debilitating and will likely result in many years of economic stagnation.But in the shorter term, it does mean that China’s leaders have far more tools to fight their battles than most Western analysts, and way too many hedge funds, currently recognize.

SEE ALSO:Carson Block told us he regrets not having shorted one stock in 2016