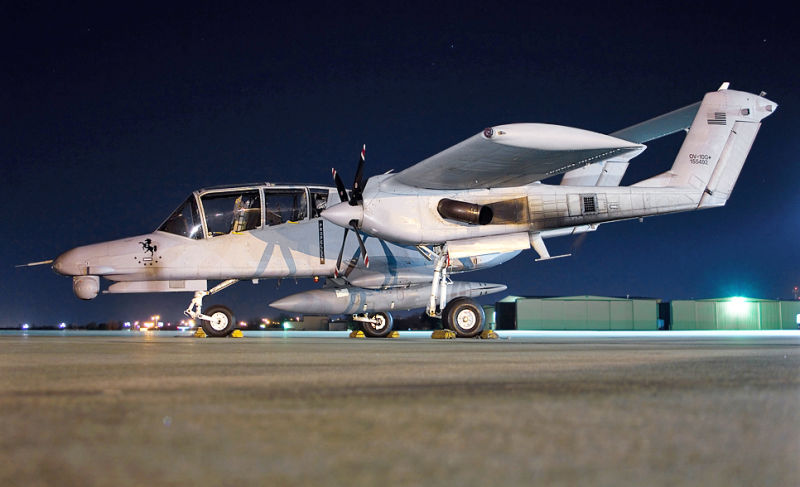 Last year we lamented that the OV-10 Bronco the fact that the OV-10 Bronco was never really allowed to reach its full potential and discussed how valuable it, or other aircraft like it, would be in the wars of the last 15 years. Well, it turns out the Navy eventually came to terms with this fact and sent the two most capable Broncos ever built into combat in the Middle East.

The OV-10 Bronco was a flying and fighting do-all sport utility vehicle. It could loiter for hours, … Read more Read more

Our friend David Axe reported on the shadowy deployment of these Broncos and laid out some possibilities as to what their mission is. They have almost certainly been supporting US Special Forces operating in Iraq and were most likely directly working with the precursor to what is now called the Expeditionary Targeting Force. This special unit of around 200 operators is tasked with snatching and killing high value targets, freeing hostages, and collecting intelligence to aid the anti-ISIS campaign.

Axe reports that OV-10s performed outstandingly in combat, racking up 134 sorties and 120 combat missions over 82 days while having a 99 percent availability rate.

The Broncos crossed over to Rota Spain in late May under the callsign CAMELOT 11-12 and from there it is now clear they entered the CENTCOM area of operations. The aircraft involved were probably those those that were part of the Navy Special Warfare’s Combat Dragon II program from the 2000s.

These aircraft were already highly upgraded to the unique OV-10G+ standard and would have received another round of heavy upgrades before heading overseas. Axe reports that in 2012 $20 million was set aside for updating two Broncos. Ten million per aircraft for mechanical refreshing and the latest in radios, sensors and defensive systems seems about right.

Although this is exciting news for the OV-10, it is also a reminder of just how inept the Pentagon has been when it comes to providing sustainable, effective and affordable air support over the last 15 years.

Instead of providing light support aircraft loaded with technology like the OV-10 Bronco, we spent billions fighting men in mud huts carrying rusty AK-47s with F-16s and F-15s costing tens of thousands an hour to operate. We literally flew the wings off our fighter fleet in the process.

Instead we could and should have procured and deployed hundreds of these cost effective light attack and surveillance aircraft and trained Iraqis and the Afghans how to use them in the process. In doing so, we could have finally exited both conflicts with a simple, yet deadly air support and surveillance aircraft fleet in place so that these countries could fight their own wars.

Even the rise of ISIS could have been at least partially countered if the Iraqis have a robust fleet of light air support and surveillance aircraft. Instead the Iraqis got a couple dozen late to be delivered high-end F-16s with degraded capabilities.

An Iraqi Air Force F-16D went down near the town of Douglas, along the Arizona-New Mexico border… Read more Read more

At one time, the Department of Defense seemed like it may bet big on a light air support and surveillance aircraft initiative, but what followed were late in the game initiatives that ended up being of low-priority and inconsistent in nature.

As a result, the Pentagon made the wars in Iraq and Afghanistan an equal opportunity conflict for all of their attack and fighter assets, from bombers to harriers, without questioning that clearly asymmetric strategy. The odd thing is, buying a couple hundred light attack aircraft at the cost of a few billion dollars would likely have saved much more money by offsetting a sizable portion of the many billions in fuel, operational and lifecycle costs inflicted on America’s now run-down fast jet fleet over the last decade.

Once again, the logical but unsexy solution lost out. The fact that big defense contractors could not make tens of billions of dollars building and supporting such an aircraft and masses of retiring Pentagon officials could not get cush carriers in the defense sector because of it likely hurt its prospects.

Just recently, the very late to arrive result of the Defense Department’s clumsy and meandering attempt to provide a light air support aircraft to Afghanistan finally arrived in that country. This aircraft is the Embraer A-29 Super Tucano. The milestone occurred a decade and a half after the conflict in Afghanistan begun.

World War II was fought and won in nearly a third of that time span.

In the end it is wonderful to see that the often thick headed, fast jet obsessed flyboys in the Pentagon are getting onboard with the light air support concept—if even just slightly. The OV-10’s recent reawakening to fight ISIS is almost certainly a Special Operations Command project, not a big Navy one, or big Air Force one for that matter.

So what comes next? In a perfect world the A-29 or OV-10 will be procured in relevant numbers for our own forces so that they can be used fight lower-end conflicts. Then again the USAF could also try to justify the A-10s retirement of the A-10 by lauding the “new found” capabilities of light air support platforms like the A-29 and OV-10.

After years of infighting, the U.S. Air Force finally gave in and spared the A-10 Warthog from the… Read more Read more

Don’t put it past the USAF from doing this. In fact, the flying branch’s brass seem to be setting up Congress for precisely this type of move. The truth is that the Air Force will do seemingly anything to get rid of the A-10 and we have seen the USAF demand to buy aircraft in order to keep them from the Army, just to turn around and mothball them once they got their way.

What is more possible is,following this deployment, Special Operations Command may invest in a small fleet of these type of aircraft which would be outstanding. But once again, don’t be surprised if this concept will be seen as a cheap exit strategy for the Air Force in regards to them accomplishing their dream of finally divesting themselves of the A-10 fleet.