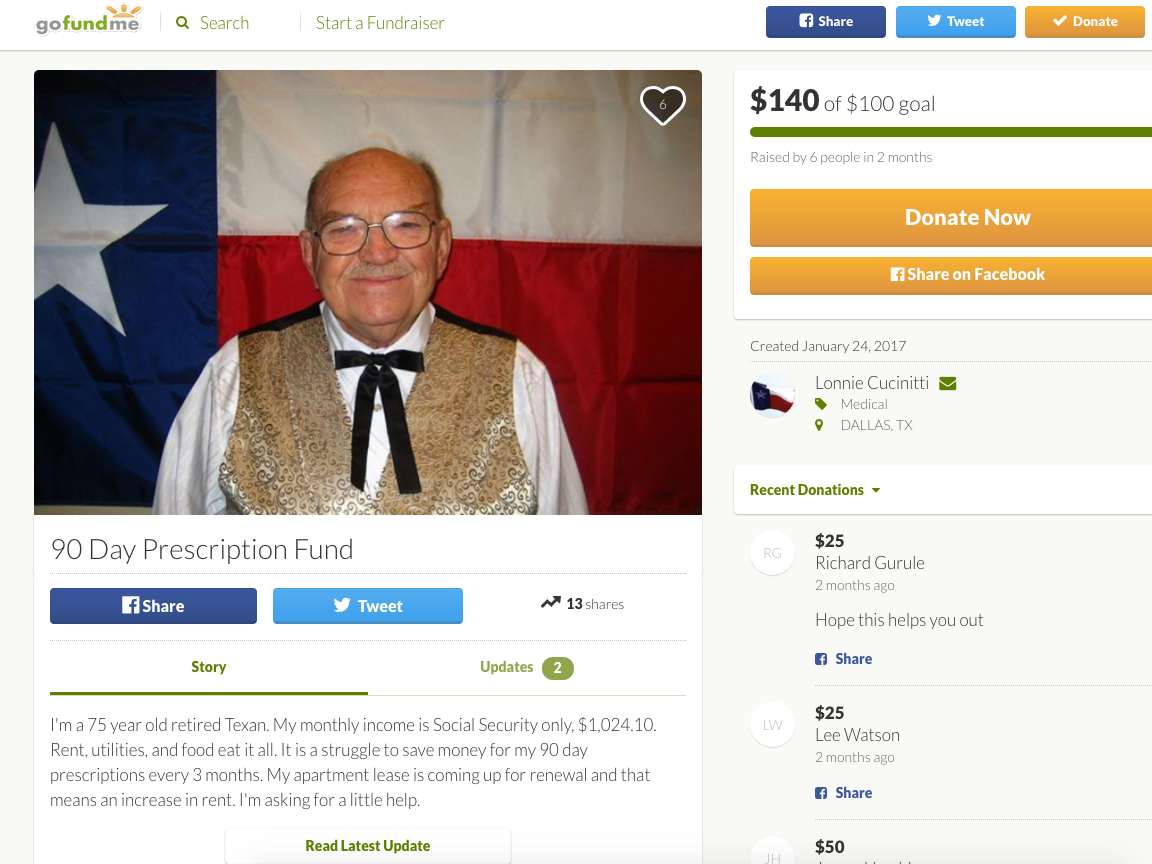 Lonnie Cucinitti gets choked up when he thinks about all the people in his life who chipped in when he needed money for his four prescriptions.

The 76-year-old Texan launched a GoFundMe page in January with the hopes of collecting enough money to cover his 90-day prescriptions. He shared the fundraiser on his Facebook page, and he started receiving small donations, a few from people he didn’t know.

Most came from friends he had made while he was in the Navy, whom he’d met more than 50 years ago.

“It makes me very emotional to think that people I met 50 years ago would care enough to send $50,” he told Business Insider.

Cucinitti is one of many people who have turned to crowdfunding to cover routine medical expenses. While crowdfunding is mainly used for emergency medical costs, many still turn to sites like GoFundMe for costly prescriptions, including insulin, a life-saving diabetes medication that’s seen its list prices increase an average of 300% over the last decade.

A search for “prescription” on GoFundMe bought up roughly 13,600 results of past and current funding pages. For insulin — both for insulin pumps and the medication itself — there were almost 6,000 results. GoFundMe did not respond to requests for comment on the topic.

The reasons people cite for turning to crowdfunding vary from trying to fill in gaps in Medicare to hitting deductibles, or the amount of money a person needs to pay out of pocket before insurance kicks in and picks up most of the rest, to just generally hoping to make ends meet.

For Cucinitti, who lives on $1,024 a month, the $120 he needed to cover three months worth of pills was more than he could afford. He said he’s noticed his prescriptions have “gone up like crazy,” which is when he started shopping around for the cheapest prices. He was paying roughly $100 more for his prescriptions before switching to Kroger grocery stores.

He’s not alone in feeling frustrated by high prescription prices. Tina Craigen’s friend helped her launched a GoFundMe page to cover the cost of a medication for Crohn’s disease, an inflammatory disease that affects the lining of the digestive tract. Craigen had seen others on social media use the site to raise money to take part in clinical trials, so she and her friend thought it might be a good idea to put it to use when she started out on a new medication to treat the disease. With her insurance, Craigen has to pay $1,300 for her treatment, an infusion that she takes every three to four weeks. Without insurance, the treatment may have cost her $33,000 per infusion. The campaign launched roughly a month ago, and so far she’s raised about $1,000 toward her $15,000 goal. She said she hopes to get enough to get her through six months worth of treatment, at which point she can see if it’s helping or not. Anything she can raise above that, she plans to donate to raise awareness about the cost of these treatments. “It’s frustrating to need prescription help,” she said.

“The rise of medical crowdfunding carries the promise of more efficiently matching potential donors with unmet needs in ways that may increase overall giving, mirroring emerging technologies in other industries such as ride-hailing and retail services that aim to more efficiently match supply and demand,” the authors wrote.

At the same time, there are ethical and legal questions that may come up, especially if people are raising money for experimental treatments. The article also brought up concerns about how doctors should interact with the sites if their patients are using them.

For Cucinitti, the process was relatively smooth sailing. He raised $140, which after GoFundMe took out its percentage, was enough to cover the prescriptions. Afterward, his brother chipped in another $200, which should cover his prescriptions for a while. Cucinitti said he does plan on using GoFundMe to raise funds again next year.