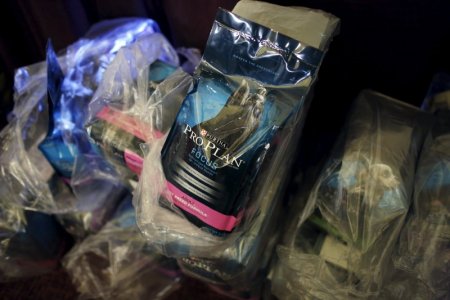 Thomson ReutersDog food is seen laid out at the Hotel Pennsylvania ahead of the Westminster Dog Show in the Manhattan borough of New York.

(Reuters) – Come economic rain or shine, Americans spend $60 billion a year on their pets, a fact that has led investors to seek shelter in pet company shares when the stock market goes to the dogs.

The sector’s reputation as an all-weather investment may be vastly overstated, however.

Shares of companies that feed, groom, treat or pamper pets generally outperform the overall stock market during recessions and market routs, but that doesn’t mean they all do well.

Over the last year, for example, natural pet food companies Freshpet Inc and Blue Buffalo Pet Products Inc have nosedived as thin margins and competition have eaten into their profits despite the popularity of precious puppy food.

Freshpet is down 75.4 percent from its April 2014 peak, while Blue Buffalo, which went public in July 2015, has seen its shares fall 43 percent since then.

In the last recession, some stocks did well and some did not. While the S&P 500 was losing 57 percent between October 2007 and March 2009, shares of online pet pharmacy PetMed Express Inc
, animal health testing company Idexx Laboratories Inc and vaccine distributor Henry Schein Inc
fell 7.1 percent, 49.8 percent and 45.5 percent respectively.

So far this year, with the S&P down 10 percent, PetMed, Idexx and Henry Schein have fallen 5.5 percent, 7.6 percent and 0.2 percent respectively.

“The thing with the retail side is that it’s a much more competitive business, so you can get your dog food at a 100 different stores and they’re all trying to protect razor-thin margins,” said Jarl Ginsberg, portfolio manager of the Columbia Small and Mid Cap Value Fund, in New York.

The animal healthcare industry, with companies such as Henry Schein and Heska Corp
, a maker of animal lab testing products, has done better. Henry Schein is up 11 percent in the last 12 months, while Heska is up 55 percent.

These companies aren’t affected by the U.S. policy debate on human healthcare spending, do not depend on payments from insurers and are also likely to do well because of recent strides in diagnostics, said William Bell, a portfolio manager at Atlanta Capital Management.

“The lifetime revenue per dog, if you’re doing every test that’s recommended, will be $17,000,” said Bell. “Right now, the revenue per dog is $3,000 so there’s tremendous room for growth.”

Pet owners do spend on their animals – a fact made evident by the fuss surrounding this week’s Westminster Kennel Club Dog Show in New York.

Spending on pets in the United States has grown every year since 1994, according to the American Pet Products Association, with 2015 U.S. spending – at $60.59 billion – up 4.4 percent from the previous year.

Events like the Westminster show only add to the attraction, analysts say.

But investors have to be selective, taking into account the fundamentals of individual companies as well as the industry, said Scott Clemons, chief investment strategist at Brown Brothers Harriman in New York, which owns about 1.5 million shares in Henry Schein.

Several pet-industry stocks are pricey. Idexx currently trades at 31 times forward 12-month earnings and Henry Schein at 23.6 times, compared with the 14.5 average of companies in the S&P 500, according to Thomson Reuters data.

Bell is still a believer, though, even as some economic indicators point to weakness in the U.S. economy.

“I think you’re going to see continued growth. Particularly in times of uncertainty these are the kind of stocks that people want to buy because you know what you’re going to get,” he said.