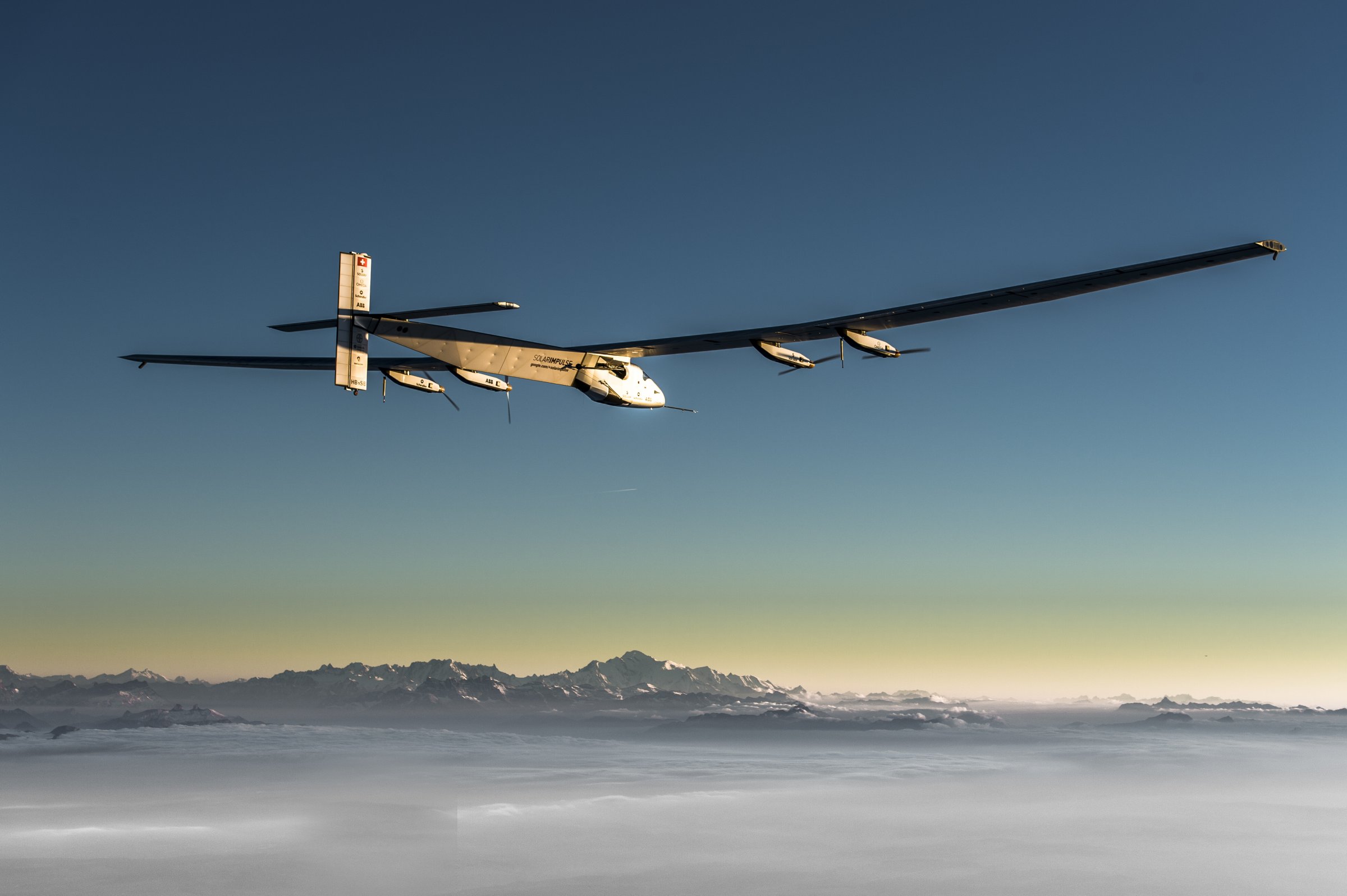 The plane is currently making final preparations for its trip across the Atlantic from the eastern United States.

Swiss pilots Bertrand Piccard and André Borschberg, who have alternated legs since the attempt began in Dubai in March of 2015, told Business Insider that although flying the strange, wider-than-a-Boeing-747 aircraft is very challenging, they both very much enjoy it.

“There is first a feeling of complete freedom because you have no fuel,” Piccard said. “This is really the first aircraft with an unlimited endurance.”

For Piccard, whose exploits include being the first — along with partner Brian Jones — to fly around the world in a balloon in 1999, the finicky Solar Impulse took some to get used to.

“At the beginning it was very hard, because everything happens slowly and you tend to over-correct, overreact, over-control and create oscillations,” Borschberg said. “It takes some time in the simulator.”

Control forces are very heavy, and the airplane is especially difficult to handle in turbulence, Borschberg said. “Any time we put new pilots, or even pilots that have never flown it, into the simulator, they always crash,” Piccard said.

The aircraft travels at about 50 mph, and given enough headwind it can maintain the same place over the earth or even go backwards. That can make lining up an approach to an airport a challenge when the wind threatens to blow the aircraft away from the field, Borschberg said.

But despite the challenges, both pilots expressed a deep connection with their craft.

“It’s an incredible airplane. I mean I love it,” Borschberg said. “Sometimes when you talk to test pilots it is like ‘It’s okay, I did it, but I am glad I don’t have to get into the airplane again.’ But this is totally not the case.”

“It helped me to fly across the Pacific Ocean for five days, and of course I help it to get its energy, so we became partners in achieving the record flight,” Borschberg said.

The machine, currently being kept cool under a large tent alongside the Lehigh Valley International Airport in Allentown, PA, looks like a prehistoric bird of outrageous proportions. Its carbon fiber bones, visible through the slightly translucent fabric skin, add to the illusion.

All around it, a team of mechanics and engineers are preparing for the transatlantic crossing.

Air conditioning units were brought in to keep its batteries cool hum under each wing, and the cockpit’s carbon fiber shell sits on the ground beside the aircraft, revealing the complex systems underneath. William FiermanControls for oxygen systems and circuit breaker panels inside the cockpit.

Behind the pilot’s seat, which fully reclines to allow rest periods and a little mobility, several green oxygen tanks keep the pilot alive at altitudes of up to 28,000 feet — nearly the height of Mount Everest. They must wear cold-resistant flight suits in the un-pressurized, unheated cockpit.

Piccard and Borschberg have their own strategies for dealing with the stresses of extremely long flights. Borschberg practices meditation derived from yoga, while Piccard, a psychiatrist, practices self-hypnosis.

Borschberg found that he can sleep for about 20 minutes every two hours.

From the way the pilots talk about their flights, its clear there are two things keeping the Solar Impulse aloft: sunlight and some very heavy duty math.

Each trip requires serious number crunching by engineers and meteorologists who must calculate the route and timing with the widest margin for error.

Piccard even brought with him Belgian meteorologist Luc Trullemans, who assisted him during his around the world balloon flight.

Borschberg will next fly the Solar Impulse from Pennsylvania to John F. Kennedy International in New York City, making a few circles around the Statue of Liberty for good measure.

From there Piccard will pilot it across the Atlantic, the last major barrier to overcome on the journey to Dubai.

The flight will roughly retrace the same voyage Charles Lindbergh undertook almost exactly 89 years ago, when he became the first to cross the Atlantic non-stop. Solar ImpulseThe aircraft in flight over Hawaii this year. William FiermanTechnicians prepare the aircraft for its transatlantic journey. SEE ALSO:A manufacturer you’ve never heard of just unveiled an airplane that could change the world