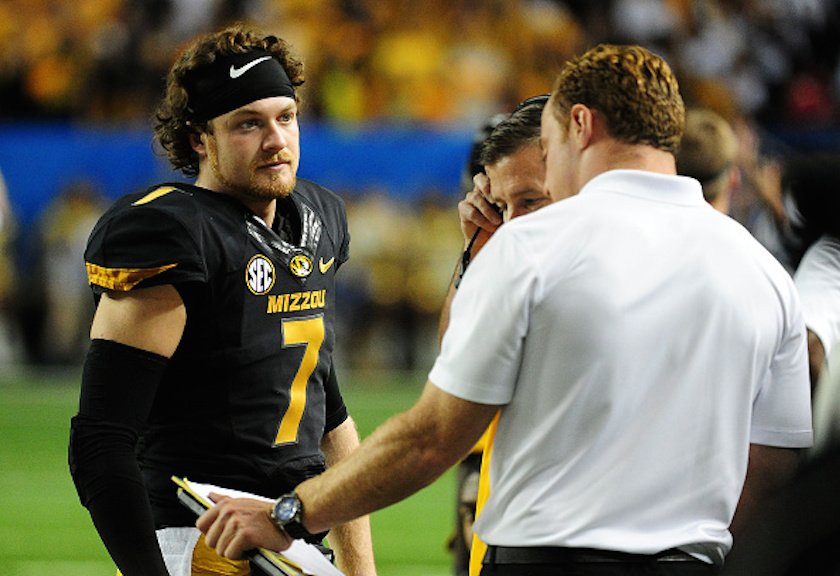 Scott Cunningham/Getty ImagesMaty Mauk of the Missouri Tigers talks to coaching staff during their SEC Championship game against the Alabama Crimson Tide at the Georgia Dome on December 6, 2014, in Atlanta, Georgia.

After a disturbing video purportedly showing the University of Missouri quarterback snorting a line of white powder, Maty Mauk is out. “I met with Maty Mauk this morning and informed him of my decision to permanently dismiss him from the football program,” Missouri coach Barry Odom said on Thursday, reports The Kansas City Star.

The dismissal comes after three suspensions for Mauk, a 6-foot, 200-pound redshirt junior from Ohio.

He was suspended twice for drug-alcohol violations and a third time after the nine-second video resurfaced. He had been given a “fresh start” by Odom in December.

“As for the video appearing on social media this week, it is concerning, but we believe it is from a long time ago,” Odom said.

The video, which was from 2013 and has since been deleted, triggered the MU athletic department to investigate Mauk’s recent behavior.

After the video surfaced, the MU athletic department released a statement, saying:

“We are currently gathering information regarding the video in question. This is an issue we take very seriously and one that will not be tolerated within our program. We will take appropriate action once we have all the facts. In the interim, Maty Mauk has been indefinitely suspended from the Mizzou football program.”

“After gathering information and speaking with a number of individuals this week, it is clear Maty has failed to live up to those expectations by violating team rules in recent weeks,” Odom said on January 28.

“We believe it is in his best interest to focus on his personal life and his academic career at this time. We remain committed to helping him work through the challenges and earn his degree.”

In the four games Mauk played last season for the Missouri Tigers, he led Mizzou to a 3-1 record and passed for 654 yards with six touchdowns and four interceptions, ESPN notes.

Scott Davis contributed to this report.

NOW WATCH: Why going to college right after high school is a bad idea