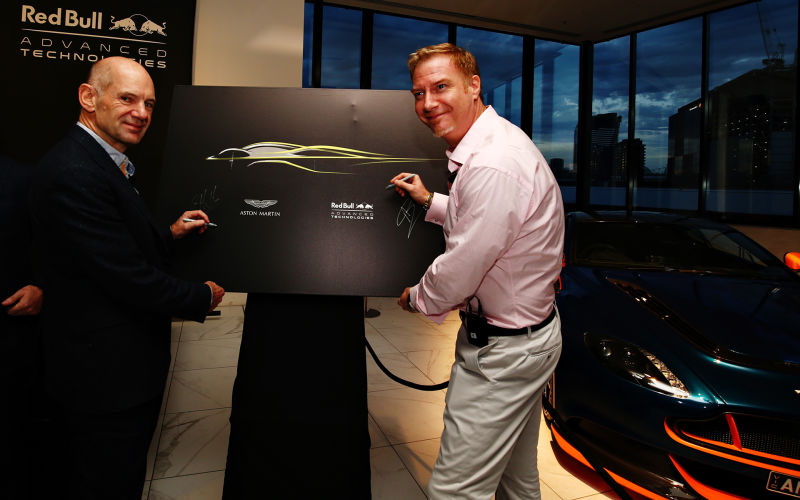 The last time an F1 mastermind made a car, we ended up with the McLaren F1. Now legendary Red Bull F1 designer Adrian Newey will make a road-going hypercar for Aston Martin.

I’m not talking about Gordon Murray’s blueprints, nor the Ultima GTR that was used for… Read more Read more

It’s been an open secret for more than three years now that Red Bull’s genius Chief Technical Officer Adrian Newey wants to build a hypercar for the road. Now, we also know said product will wear an Aston Martin badge.

Back in 2012, Team Principal Christian Horner said “it’s a natural evolution for Red Bull Racing to get involved in road car engineering.” Immediately, people started wondering just how keen Adrian Newey was to put something truly special behind a number plate. Now, Horner says we should get ready for “the ultimate of all road cars.” Hear that, Bugatti?

The 261 mph Bugatti Chiron starts at $2.65 million before taxes, if you convert from Euros. It… Read more Read more

Red Bull’s F1 cars will run with Aston Martin logos on their noses now that Infiniti has left the party, but the company believes a new hypercar will boost awareness of its brand (#brand) even further, because not enough people in the world have encountered Red Bull and/or Aston Martin. Aston’s last halo car was the One-77, and while their brand new Vulcan is quite a beast with its 800 horsepower naturally-aspirated V12, a track-only special built in highly limited numbers plays in a very different league than the hypercars you can also get your groceries with.

Adrian Newey is equally enthusiastic about the new challenge:

The car Aston’s Chief Creative Officer refers to as “the ultimate fusion of art and technology” should indeed translate Red Bull F1 developments into a new arena according to Newey, and the product of that might give McLaren something to think about before turning the P1 into an electric car.

Will it be a hybrid? Will it use Aston’s new twin-turbo V12 turned up to 12, or something from AMG at last? Who knows!

Either way, expect all the downforce and speed the best of the best can come up with.