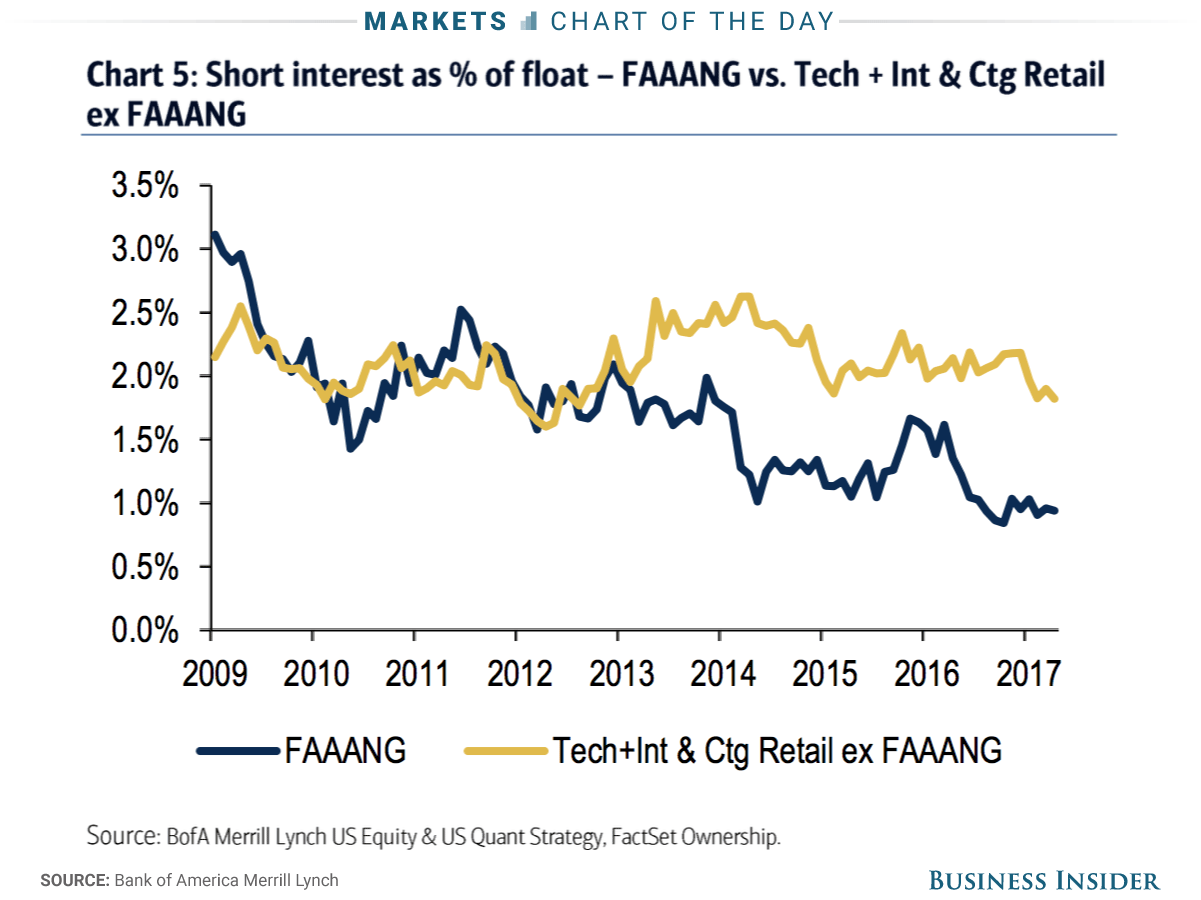 That’s been the logic employed by tech stock bears who have thrown in the towel on short positions over the last year. And the buying volume that results from what’s commonly referred to as a “short squeeze” has been a crucial driver of tech gains during the period.

What’s more, active managers have actually slightly decreased exposure to the so-called FANG stocks (Facebook, Amazon, Netflix, Google) that have recently gotten the lion’s share of credit for stock gains not just in tech, but also the entire stock market.

That makes the role of short covering as a driver of share appreciation even more notable, according to strategists at Bank of America Merrill Lynch.

The heavily-weighted FANG group has returned almost 30% so far this year, while the S&P 500 has climbed 8%. Just last week investors poured $1.8 billion into the largest exchange-traded fund tracking the tech sector, the biggest inflow in almost seven years.

The covering of bearish positions can be seen when looking at short interest as a percentage of float for FANG stocks, plus Adobe and Broadcom, which have been identified by BAML as showing similarly robust sales expansion and long-term growth potential. The group — called FAAANG — has seen its level of shorts decline as positions have been closed. While short covering has clearly been instrumental, no discussion of tech strength is complete without a mention of the sector’s torrid earnings growth. The group boasts the best profit expansion in the S&P 500 at the moment, excluding energy, and is projected to see earnings increase by 19% for the full-year 2017, while the broader benchmark is expected to see ex-energy growth of just 9.2%, according to data compiled by Bloomberg.

Still, amid all this talk of FANG & Co. and earnings growth, not all tech stocks are so loved by investors. Companies like IBM, Xerox and Yahoo are now more underweight by fund managers than at any point since 2008, according to holdings data compiled by BAML.

SEE ALSO:Investors are pouring billions into the hottest part of the stock market