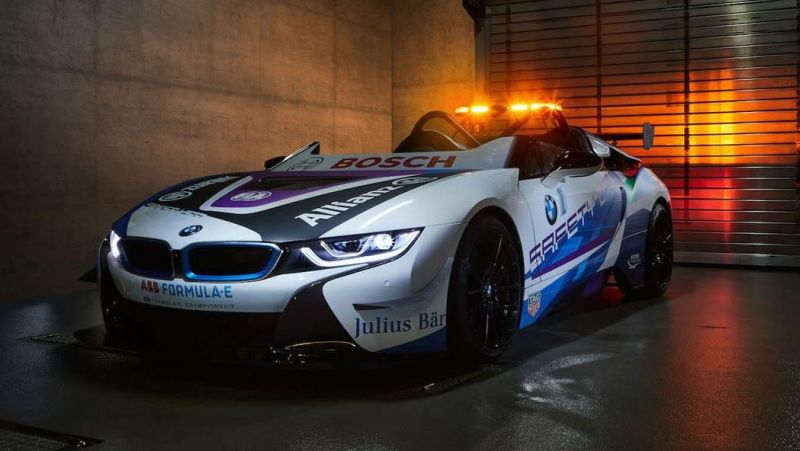 Formula E is surprisingly dedicated to creating the most incredible looking cars on track today—even when it comes to their safety car. Now, they’ve announced that they’re going to be implementing the BMW i8 Roadster<for the rest of the season, which crosses off some bucket list items for motorsport overall.

According to Formula E’s press release, this is the world’s first open-top safety car. That seems both hard to believe historically given that the very first safety car in F1 was a targa-topped Porsche 914, and also something of a contradiction, if you ask me. I don’t often find myself admiring convertibles as the pinnacle of safety technology. But I do have to admit that the i8 Roadster looks really really cool specifically because it’s topless.

Five Things to Know About the Futuristic BMW i8

The BMW i8 is currently BMW’s most exciting model. It looks strikingly close to its concept, which…

This i8 Roadster, to be used for the rest of this season, has both had its windshield chopped out, and has been modified for performance, too, with the safety car version sitting 15 mm lower than the production model i8. And, to help it maintain a race-y pace when leading the FE field, it has M Carbon Ceramic Brakes and stiffer suspension..

It’s also decked out in a pretty gorgeous livery. The futuristic-style red, white, blue, and purple colors sweeping back to the rear end are a great touch, and one that has me hoping there might be some in-race shenanigans, just so we can see this thing leading the field.

Top or no top, the i8 Roadster looks like it would be a hell of a lot of fun to drive, if only just to see what that mini-windscreen is like. Will it suck a big one in a light sprinkle? Will the driver be scraping bugs off himself after a few laps around a track? Or is it going to provide maximum freedom when cruising around the track?

The i8 Roadster was revealed during the Monaco ePrix weekend<CQ with the intention that<CQ—namely, just the Berlin, Bern and dual-header New York ePrix<CQ.