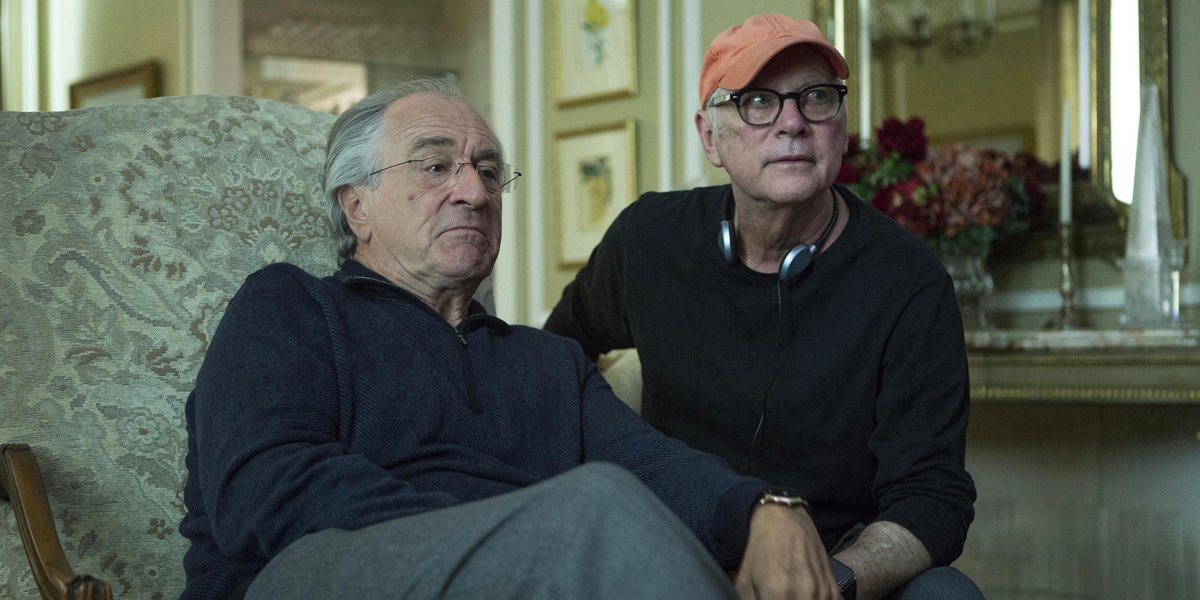 (L-R) Robert De Niro and Barry Levinson on the set of “The Wizard of Lies.”Craig Blakenhorn/HBO

The HBO movie “The Wizard of Lies” (airing Saturday) showcases the legendary talents of both its star and director, Robert De Niro and director Barry Levinson, who worked together for the fourth time on the feature. They deliver a powerful look at the revelation that Wall Street pillar Bernie Madoff concocted the biggest Ponzi scheme in history and how it dismantled his entire family.

De Niro plays Madoff as a cool and calm hustler who, after the 2008 crash, runs out of tricks and finally admits to swindling over $50 billion from people since the 1970s (he’s currently serving a 150-year prison sentence). Levinson takes a complex financial story and turns it into a heartbreaking family saga, in which the patriarch fails his loyal children, Mark (who committed suicide in 2010) and Andrew (who died of lymphoma in 2014), along with his wife, Ruth (extraordinarily played by Michelle Pfeiffer).

De Niro and Levinson talked to Business Insider about the challenges of bringing “The Wizard of Lies” (based on Diana B. Henriques’ book of the same name) to the screen, developing their classic 1997 movie “Wag the Dog” as a TV series (also for HBO), and what De Niro has gone through to reverse-age himself for his upcoming movie with Martin Scorsese, “The Irishman.”

Jason Guerrasio: Mr. De Niro, I believe Diana’s book was optioned in 2011. Were you involved in the project since then?

Robert De Niro: Yeah, I don’t know when it was optioned, or dropped by other people, but as far as I know we were on it for a few years.

Guerrasio: What attracted you not just to Madoff but to Henriques’ book?

De Niro: The book was great. We were just trying to make it into a good screenplay and it went through a few iterations and finally Barry and his son Sam came on and that was good. We were finally at a point where we could make it. Guerrasio: Mr. Levinson, when you came on, where was the script at and where did you want to take it?

Levinson: I think it was the focus on Bernie and the family dynamic that we wanted to get to and then build it out. So if you understand Bernie’s behavior with his family, which would lead to the ultimate destruction of the family, you will learn a lot about Bernie. And then you have all these thousands of people whose lives were affected by this man. So I think it was to shift the focus from the pure financial aspects of it and see the man and his behavior and the family and how it all came unglued. With that design we can get connected to the character and the emotions and then you deal with the financial.

Guerrasio: Mr. De Niro, did you want to meet Madoff?

De Niro: We thought about it. [Producing partner] Jane [Rosenthal] and I talked about it, and I thought it may be too much to go down there. And other people were having problems. Even Diana Henriques, she was very limited in her time with him. Someone else I knew had gone down to see him and he was very limited. He couldn’t do an interview with him. I forget exactly what he did, but he could talk to him but couldn’t do an interview. So I just felt with the limited time, and me going there would have been a big deal made about it, that I just didn’t. I met his lawyer and some of his friends. Relatives and in-laws.

Guerrasio: Did you feel you had to hear him on tape? Did you need to hear his voice?

De Niro: I heard his voice. There’s little on him but there was one thing that I played over and over again.

Guerrasio: His voice is similar to yours.

De Niro: Exactly. And my hair is similar to his. And as far as the baldness in the front, we looked at that very carefully and shaved the front of my scalp. Because when you put on those bald caps and the fake hair on top, it looks good but not as good as when you do it with your hair. And doing it this way is a commitment because you then know there are things you can’t do later in reshoots because the hair grows back. But there are ways to work around it. Robert De Niro as Bernie Madoff in “The Wizard of Lies.”HBO

Levinson: The interesting thing is Diana plays herself in the movie and doing the scenes with Bob, seeing she was the person who sat across from Bernie when interviewing him for the book, after a few takes I would go to her and say, “How is Bob’s Bernie?” And she said, “There are some moments that he’s so close to Bernie that it gave me goosebumps.” And I thought that was good.

Guerrasio: Was it a challenge to portray Madoff, who is obviously a con man, as seeming trustworthy?

De Niro: But people want to believe him. So he’s doing a good job. He’s letting you do all the work. And then there’s the reputation. People want to come to him and he will only choose who he wants to be in his investment circle, if you will, then it becomes easier and easier.

Guerrasio: Because his reputation precedes him. He was a chairman of the NASDAQ — why would he not be on the level?

Levinson: The con artist has to keep evolving, otherwise he’s caught. His thing was he would tell people, “I don’t know if I want your money.”

De Niro: That was his MO and his strength. I don’t want to say it’s his brilliance, but that was the scheme he used. He had this fatherly persona so people would put their guard down and think, “How could this guy screw me?”

Guerrasio: The way you guys highlight Madoff’s sons and what they went through is so heartbreaking. The suicide of Mark — was that always in the script and did you always want to show it in such a raw manner?

Levinson: It’s one thing to say his son committed suicide, but to understand what took place, cause and effect — that he could not live with this shame and he so desperately needed Bernie’s love — that’s what happened. You can’t back away from it. You want to understand the gravity of what this man brought about. Mark commits suicide, an investment banker commits suicide, there are casualties. This isn’t a guy with a gun that kills people but this man destroys the lives of thousands of people.

Guerrasio: He kills you with a smile and a handshake.

Guerrasio: Mr. De Niro, can you compare this character to anyone you’ve played in the past?

Guerrasio: I see a little Sam “Ace” Rothstein from “Casino.” A little.

De Niro: A little. Possibly. It’s different. He was not a person who would lie or betray his family like Bernie did. This is a whole other thing.

Guerrasio: This isn’t the only HBO project you guys are working on. What’s the latest on the “Wag the Dog” series?

Guerrasio: Mr. De Niro, is there any interest in coming back as Conrad, your character from the movie?

De Niro: I don’t know. We haven’t talked about it. [Turns to Levinson] Should I?

Guerrasio: Watching what’s unfolding in politics, is it like watching “Wag the Dog” all over again?

De Niro: It is. It’s unbelievable. Levinson: You just look at it all: Deny, deny, deny. Keep shifting the headline all the time. All those things are in the movie, and we’ve ended up with all of those things now. It’s crazy to see that’s what has come about now. The idea of diversion. It’s like what Bob says in the movie when William H. Macy says, “There’s no war,” he says, “Of course there’s a war. I see it on TV.”

Guerrasio: Mr. De Niro, can you talk at all about the technology being used in “The Irishman” to make you look decades younger? Is that something you guys are still planning to do?

Guerrasio: Have any preliminary things happened? Getting all the motion-capture dots all over your face?

De Niro: We did that. Then we did some tests. I did a scene from “Goodfellas” and then they worked on that piece and we’ve been slowly moving along. We’re going to make it great.

Guerrasio: Was it a trip seeing a CGI version of yourself as a younger person?

De Niro: If they can perfect it, I’ll be able to work for another 30 years. [Laughs]