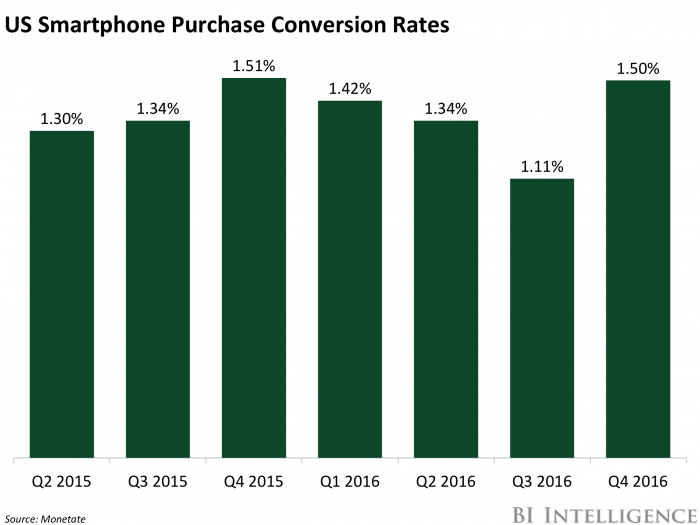 THE PAYMENTS INDUSTRY EXPLAINED: The Trends Creating New Winners And Losers In The Card-Processing Ecosystem

THE RETAILER MOBILE WALLETS REPORT: How stores can benefit from developing their own digital payments apps

THE MOBILE P2P PAYMENTS REPORT: Why it’s more important than ever for companies to monetize mobile P2P

This is Samsung Pay’s second buy-button partnership, following one forged with Masterpass last October, and will launch by the end of this year in any market where both services are live.

The move could make online purchasing easier for a vast number of users. Mobile purchasing is challenging, thanks to friction associated with slower connections and small screens. That leads to low conversion rates — in Q4 2016, US smartphone conversion rates were 1.5%, compared to 4.3% on desktop — which single-click solutions help resolve, by allowing users to skip challenging steps like billing and shipping information entry. Visa Checkout has improved completion rates by up to 86%, according to a ComScore study. Now, Samsung Pay will have access to that at scale: The service counts over 300,000 partner merchants representing $173 billion in addressable volume, which Samsung Pay will now be exposed to.

That could help grow the wallet’s user base and volume, ultimately posing a threat to other players in the space.

Peer-to-peer (P2P) payments, defined as informal payments made from one person to another, have long been a prominent feature of the payments industry.

That’s because individuals transfer funds to each other on a regular basis, whether it’s to make a recurring payment, reimburse a friend, or split a dinner bill.

Cash and checks have historically dominated the P2P ecosystem, and they’re still a popular tool. But as smartphones become a primary computing device, top digital platforms, like Venmo and Google Wallet, have enabled customers to turn away from cash and make those payments digitally with ease. Over the next few years, though overall P2P spend will remain constant, a shift to mobile payments across the board and increased spending power from the digital-savvy younger generation will cause the mobile P2P industry to skyrocket.

That poses a problem for firms providing these services, though. Historically, most of these players have taken on mobile P2P at a loss because it’s a low-friction way to onboard users and won’t catch on unless it’s free, or largely free, to consumers. But as it becomes more popular and starts to eat into these firms’ traditional streams of revenue, finding ways to monetize is increasingly important. That could mean moving P2P functionality into more profitable environments, leveraging existing networks of friends to encourage spending, or offering value-added services at a nominal fee.

Jaime Toplin, research analyst for BI Intelligence, Business Insider’s premium research service, has compiled a detailed report on mobile P2P payments that examines what’s driving this shift to mobile P2P and explains why companies need to find a way to capitalize on it quickly. It discusses how firms can use the tools they have to gain in the P2P space, details several cases, and evaluates which strategies might be the most effective in monetizing these platforms.