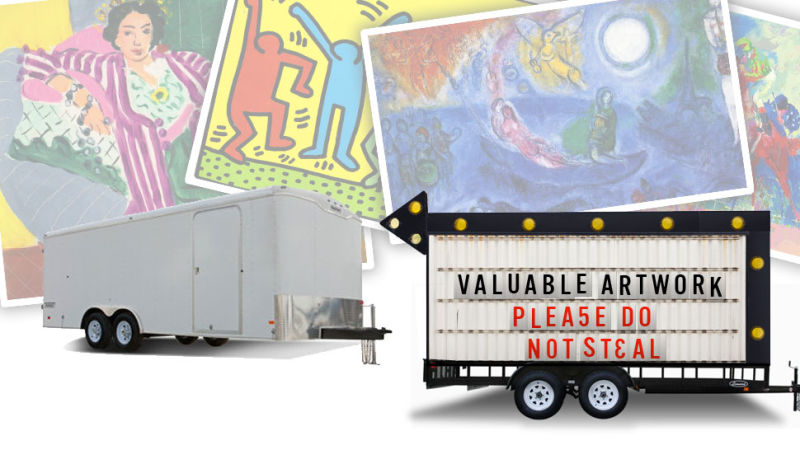 Do you have about $250,000 worth of paintings, prints, and sculptures by artists like Marc Chagall, Keith Haring, Henri Matisse, and Leroy Neiman? Sure you do. It’s hard to find places for all that stuff, so I bet you’re probably thinking of shoving them in a trailer on the street. Some advice? Don’t. Incredibly, they may get stolen, like these did.

The actual theft took place on November 20th, when the 24-foot, 2005 Haulmark trailer was taken from the corner of Nordhoff St. and Alabama Ave in Canoga Park, CA. Just to give an idea of the area, when I lived in LA, I wouldn’t have really wanted to leave my ‘73 Beetle on the street in Canoga Park overnight, and as far as I can remember, I didn’t have any Chagall paintings or Matisse prints rolled up in the trunk.

When the LA Weekly perceptively asked why the hell anyone would leave such a collection of artwork parked in a trailer on the street, a detective with the Commercial Crimes Art Detail told them

“To the best of my knowledge, it was a warehouse spacing issue.”

Ohhhhh. Gotcha. Now I get it. Since it’s impossible to, you know, find more warehouse space anywhere in Los Angeles, or to sell works or loan them to any number of capable institutions in one of the biggest cities in the world, it makes total sense to stick these in a metal box on wheels and park it on the side of the road in Canoga Park. They’ll be fine, right? I mean, it’s not an open trailer. I bet it even had a lock!

It’s not been released who the gallery or museum or collector was who undertook this brilliant space-saving solution, but, unusually for an art theft, I’m not so sure the works are going to a worse place than they were before. Really, this may be the best thing to happen to those paintings, prints, and sculptures.

Maybe there was some insurance angle worked here? This makes no sense.