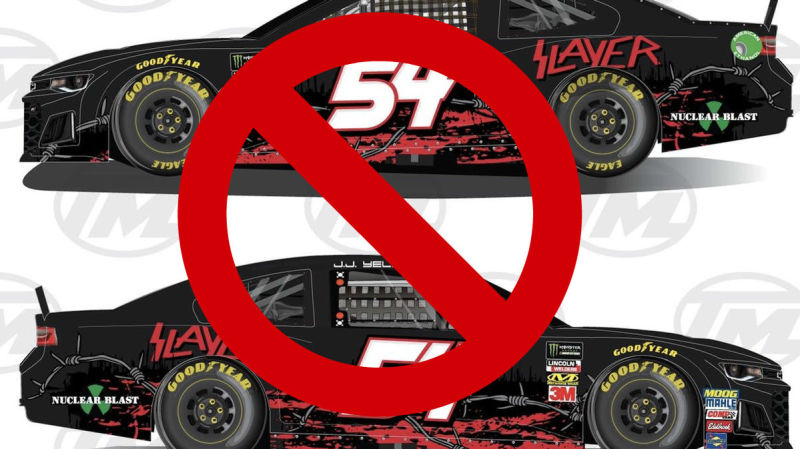 We were amped up to hear that Rick Ware Racing was going have its #54 car driven by J.J. Yeley liveried to promote the band’s final tour to tonight’s NASCAR Cup race in Bristol, Tennessee but today it seems like that idea has been shredded.

It is true that Slayer, one of the “Big Four” of Thrash Metal along with Metallica, Megadeth and Anthrax, has never shied away from controversy. Reign in Blood, Slayer’s 1986 opus, leads off with “Angel of Death,” a song about the infamous Dr. Mengele of Auschwitz’s grotesque experimentation on children. Though the album was eventually released, the inclusion of this song nearly got it canned. Now, more than 30 years later, the song remains a live show mainstay and the band maintains that it is a “history lesson” rather than a hagiography.

Replacing Slayer as the car’s main sponsor is PODS Storage, which as of press time, has no clear association with Dr. Mengele, is presumably a more acceptable image for the team as they compete in tonight’s race. The race at Bristol is sponsored by Bass Pro Shops and the NRA, the focus of plenty of ire in its own right, both on the track and off, but unlike Slayer, no plans have been made yet to remove them because of any differing images and beliefs.