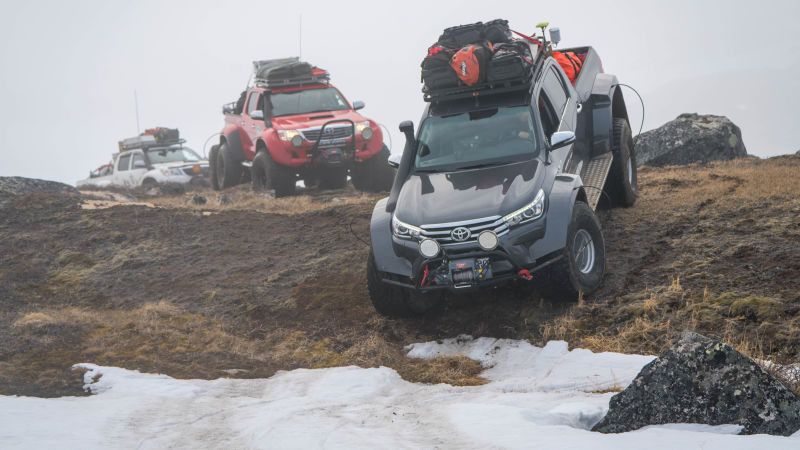 It’s hard to recommend it, though, with a total area of over 830,000 square miles and only 6 km of intercity roads. Most Greenlanders would agree; that’s why they do most of their traveling by air and sea. When large distances need to be covered by land, though, a Toyota Hilux modified to cope with snow drifts, ice chasms and extreme cold could be up to the task.

In May 2018, E7 Expeditions made the first attempt to cross the Greenland Ice Sheet by car from south to north in a set of three Toyota Hiluxes up-fitted by Iceland-based Arctic Trucks. This wasn’t their first cold-weather expedition, though. Five years earlier in 2013 the group made a run across Antarctica via the South Pole in the same modified Hilux. Still, even with that experience, Greenland posed a substantial challenge.

On the way, the E7 team pit themselves against bitter -40º temperatures and biting winds, trucks that suffered broken everything, and 42-hour marathon driving sessions. After twenty days out in wilderness that group leader Scott Brady told Outside Magazine was labeled “unexplored,” the group managed to reach their destination 3,212 miles later at Sisimiut on the western shore. This was after reaching the apex of their adventure all the way at the northern end of the island at Wulff’s Land at a staggering latitude of N81° 17’ 29″.

E7’s adventure may have been the first attempt to reach the very top of Greenland by car, but it was not the first time Toyota offroaders made their mark on the island. Back in 1999, when Arctic Trucks was just getting their start, a crew set off in three Land Cruiser 80s to cross Greenland width-wise from Nuuk in the southwest to Isortoq in the southeast and back again. The experience proved valuable, as Arctic Trucks learned that its builds were up to task even somewhere with substantially different terrain from Iceland. Still, the trucks made it through and set the stage for E7’s feat more than twenty years later.

Even though the journey was far from simple, the trucks themselves were built to face just about anything even a forbidding environment like the Greenland Ice Sheet could throw at them. The primary truck features modified suspension, a detachable crevasse bar and rollbars to prevent slides deep into cracks in the ice and mammoth 44×18.50-15 tires along with other modifications to contend with the cold, the long distance and the terrain. The support trucks feature all of this in addition to supply trailers, with one driven by a modified 6×6 drivetrain like the one that went to Antarctica back in 2014.

If these trucks sound familiar, it’s because they are. The Top Gear trio has spent a lot of time giving Arctic Trucks the recognition they deserve for building tremendous lifted trucks that look like the drawings in the margins of my middle school notebooks. You may remember Clarkson, Hammond and May’s journey across the Arctic ice sheet to reach the North Pole, or May’s attempt to scale an erupting volcano. Both of those adventures were made possible by these machines, which were originally designed to traverse the rugged Icelandic interior.

These days, Arctic Trucks is modifying more than just Toyotas for a more diverse set of conditions. Arctic trucks are climbing dunes in Dubai, crossing the Taiga in Siberia, and making their way around the Fjords of Norway. Greenland just may need vehicles equipped for all of those conditions soon, too. Climate change is quickly melting the ice sheet that Brady and Co. traversed, leaving behind sand, silt, and other difficult terrain. The ground underneath the glaciers may be iceless, but until tarmac is laid, it’s likely that only an Arctic Truck will have what it takes.