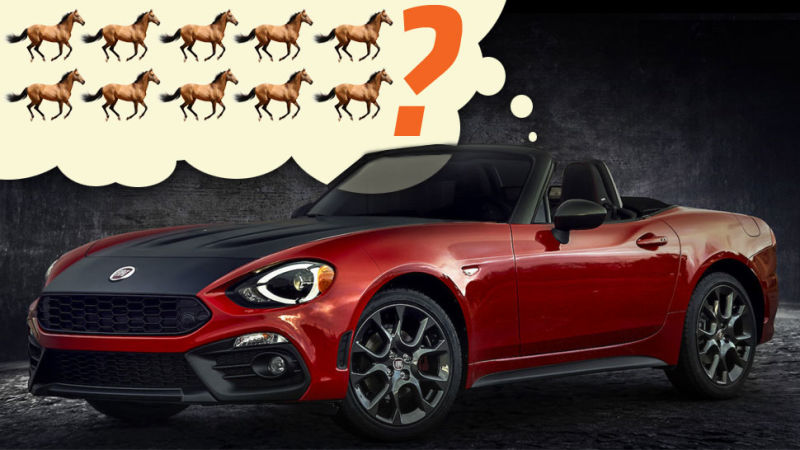 Maybe it’s got something to do with that crazy metric system the entire rest of the world uses, but for some reason, the same 1.4-liter turbo four used in the new Fiat 124 Spider Elaborazione Abarth is tuned to 170 HP in Europe, and here only 160 HP, same as the base version. Who took our ten horses?

The potent little turbo 1.4-liter four is basically the same engine we’ve seen in the Fiat 500 Abarth, also in 160 HP tune, and it’s a fun engine with a great sound. It’ll be a good fit for the 124, but that still doesn’t explain why Fiat managed to massage 10 HP out of it for those tiny countries full of skinny people, when those extra horses would really, if we’re honest, find much more work over here in the land of huge open roads and substantial asses.

Fiat spokesperson Angela Bianchi gave our friends at Autoblog a sort of non-explanation:

“The engine of the EMEA [Europe, the Middle East and Africa] Abarth Spider has unique tuning developed according to European regulations, so the [horsepower] number is different.”

Ohhhh, I see. It’s a different horsepower number because the engine is tuned 10 HP higher. Gotcha, thanks.

Wait a minute. I knew that part. Of course it’s tuned differently – some little chunk of code in that ECU is squeezing out 10 extra HP; I just want to know why.

Maybe it’s stricter or maybe just different emissions regulations? That would be my best guess. Fiat’s answer to Autoblog doesn’t really tell us much, so I’ve reached out to another FCA source to see if we can find out anything else.

I just got an email back from Fiat! It says the exact same thing they told Autoblog: “The engine of the EMEA Abarth Spider has unique tuning developed according to European regulations, so the hp number is different.” Thanks. Thanks a lot.

Even with only 160 HP, though, the absurdly-long-named Fiat 124 Spider Elaborazione Abarth seems like a great addition to the lineup. All that elaborazione-ing has essentially made a Miata Club Edition version of the 124 Spider: limited-slip diff, optional Brembo brakes, 17″ wheels, and. most noticeably, a striking matte black hood and trunk lid, to save you from all the shiny hood-related glare injuries you’re sick of dealing with.

The car still seems great, but these lost horses are driving me nuts. I’m imagining those poor bastards treading water in the middle of the Atlantic (I know it’s built in Japan by Mazda, but the engine is still Fiat!), snorting and neigh-ing at one another as they clumsily attempt to comfort each other with their flailing hooves.