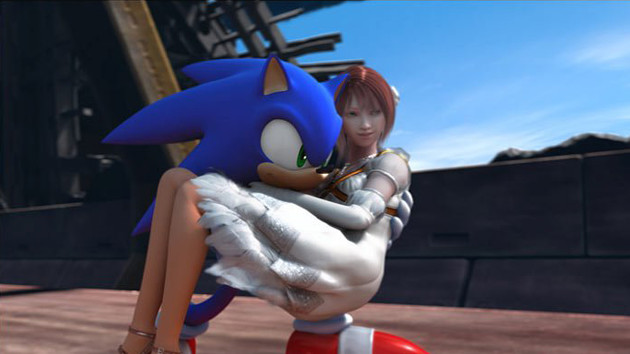 A Sonic the Hedgehog movie is currently in the works as a collaboration between both Sony and SEGA. You can expect to see it in theaters in 2018.

Sega Sammy CEO Hajime Satomi spoke about the movie with The World Folio, and while it sounds like a neat plan on paper, one hi-jinks still lingers within SEGA’s pitch. Let’s see if you can find it.

Sega Sammy Group is currently planning with Sony Pictures to create a live-action and animation hybrid “Sonic the Hedgehog” movie scheduled for release in 2018.

You see it? Yup, there it is! A “live-action and animation hybrid,” which brings to mind one powerful and haunting memory from the series’ history.

Gyaaaa! Don’t do it, SEGA! Avoid the Dark Side! Satomi would go on to say that expanding into animation and films is a part of SEGA’s possible future.

Like with this CG animation production, we would like to expand our business into other entertainment areas beyond what we are currently involved.

The remainder of the interview focuses on SEGA’s recent push into smartphones and other ways that SEGA plans to grow in the coming years. A brilliant little fact I didn’t know that he tosses out while mentioning a possible “Cool Japan” initiative is how SEGA owns the license to make Lupin III games. Yes, please!

But a Sonic the Hedgehog movie? A live-action CG animation hybrid? What do we think about that? If SEGA can set it in the late 80s and inject a genuine Goonies feel to it, I’d be down to see it. Someone get in touch with J.J. Abrams and see if he can turn out another Super 8-esque film.

Otherwise, I’m going to put more stock into the Mega Man movie due next year!