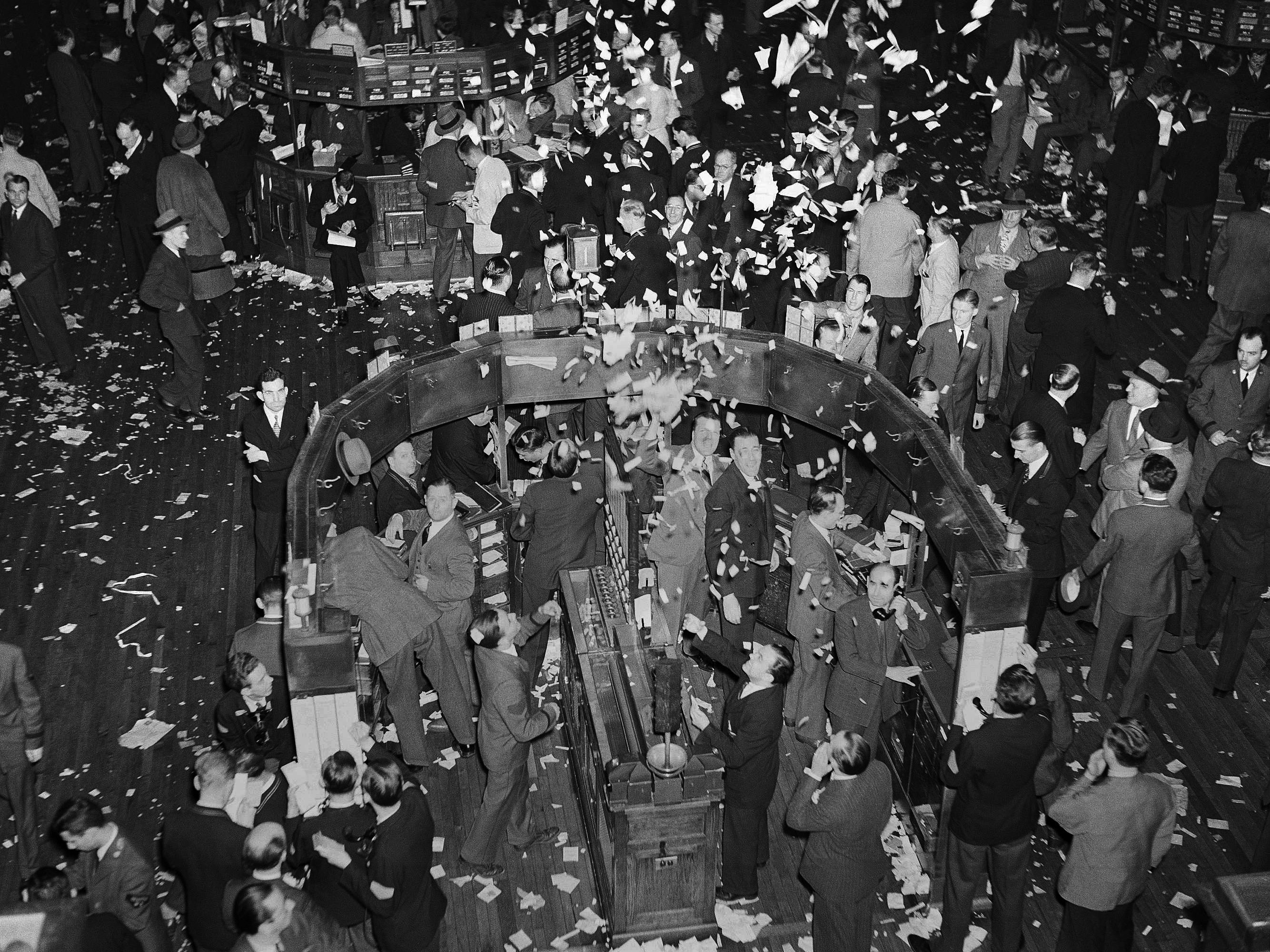 It was an all-around chaotic day in global markets as stocks tumbled, gold prices spiked, oil prices were all over the place, and Treasuries continued to grind lower.

Stocks truly were all over the place on Thursday.

Markets started the day deep in the red as overnight price action was ugly with the most notable moves coming from gold, the Japanese yen, and Treasuries.

Gold prices rocketed higher to a one-year high around $1,260 an ounce after prices had languished for much of the year.

The Japanese yen — which has been depreciating considerably over the last few years with a bet on further depreciation, one of the most popular trades in the market — fell as low as 110.99 against the dollar earlier this morning, settling near 112 for most of the afternoon.

Crude oil prices, meanwhile, hit a new low with West Texas Intermediate, the US benchmark, falling to as low as $26.07 in afternoon trade, a fresh 12-year low for the commodity. Soon after this level was put in, however, a tweet from The Wall Street Journal’s OPEC correspondent, Summer Said, said OPEC could be ready to discuss cutting production, which sent crude and stocks spiking higher.

As The WSJ noted, however, there’s really nothing new with OPEC until we hear from Saudi Arabia. Said’s tweet cited comments from the United Arab Emirate’s energy minister.

So it remains to be seen whether this cut comes to pass. It is certainly the hope of many OPEC members that something changes in an effort to boost prices, and while this is still a market-moving headline, there is a large “I’ll believe it when I see it” sort of thing going on here.

Federal Reserve Chair Janet Yellen was on Capitol Hill again on Thursday, and like all conversations about monetary policy these days, negative interest rates came up.

“We wouldn’t take those [negative rates] off the table, but we have work to do to judge whether they would be workable here,” Yellen said.

Of course, Yellen noted on Wednesday that it is unclear if the Fed possesses the legal authority to implement negative rates, though we argued then and would again that the bridge will either be crossed or not when that time comes.

Meanwhile, over at PIMCO, Scott Mather wrote about negative interest rates in the context of the recent market volatility we’ve seen.

Basically, Mather’s argument is that negative rates are the cause of the recent chaos we’ve seen because not only does the market not believe this is the right course for central banks looking to boost their economies, but that negative rates will actively hurt banks, which will, in turn, hurt the economy.

Or as we said, negative rates aren’t just not the solution, but are the problem.

The economic calendar is light this week, but the weekly report on initial jobless claims was just enough to prompt yet another post arguing that we’re not heading for a recession.

“This drop does not reverse all the apparent increase in the trend over the past couple of months, but it does add weight to our view that a good part of the increase was due to turn-of-the-year seasonal adjustment problems,” noted Pantheon Macroeconomics’ Ian Shepherdson to clients.

But the bigger point, in our minds, is that our most frequent read on the health of the US labor market — which has far and away been the brightest part of the economy over the last couple of years — continues to indicate that things are still good for US workers.

The latest sentiment reading from the American Association of Individual Investors released on Thursday showed that just 19.2% of respondents called themselves “bullish,” the second-lowest reading since the financial crisis.

The lowest reading was registered just a few weeks ago.

And while there’s data backing up the idea that now is the time to get bullish on stocks, there’s simply not a lot for investors to get excited about.

Elsewhere, Citi’s Tobias Levkovich, one of the most strident bulls on Wall Street, said that every client he talks to is bearish, accusing him of being too bullish for simply not thinking that the world is falling apart.

“There appears to be fear of fear itself as sentiment is simply awful,” Levkovich wrote in a recent note to clients. “Almost every investor we talk to thinks we are too pollyannish by thinking the world isn’t about to go off the edge.”

Alternatively, he thinks FDR was right: The only thing investors have to fear is fear.

“The Big Short” but for cars? Maybe.

Startups that don’t have a Plan B will have to survive like “cockroaches.”

Pandora is shopping itself.

12 housing markets with tons of vacancies.

SEE ALSO:Negative rates are the problem, not the solution