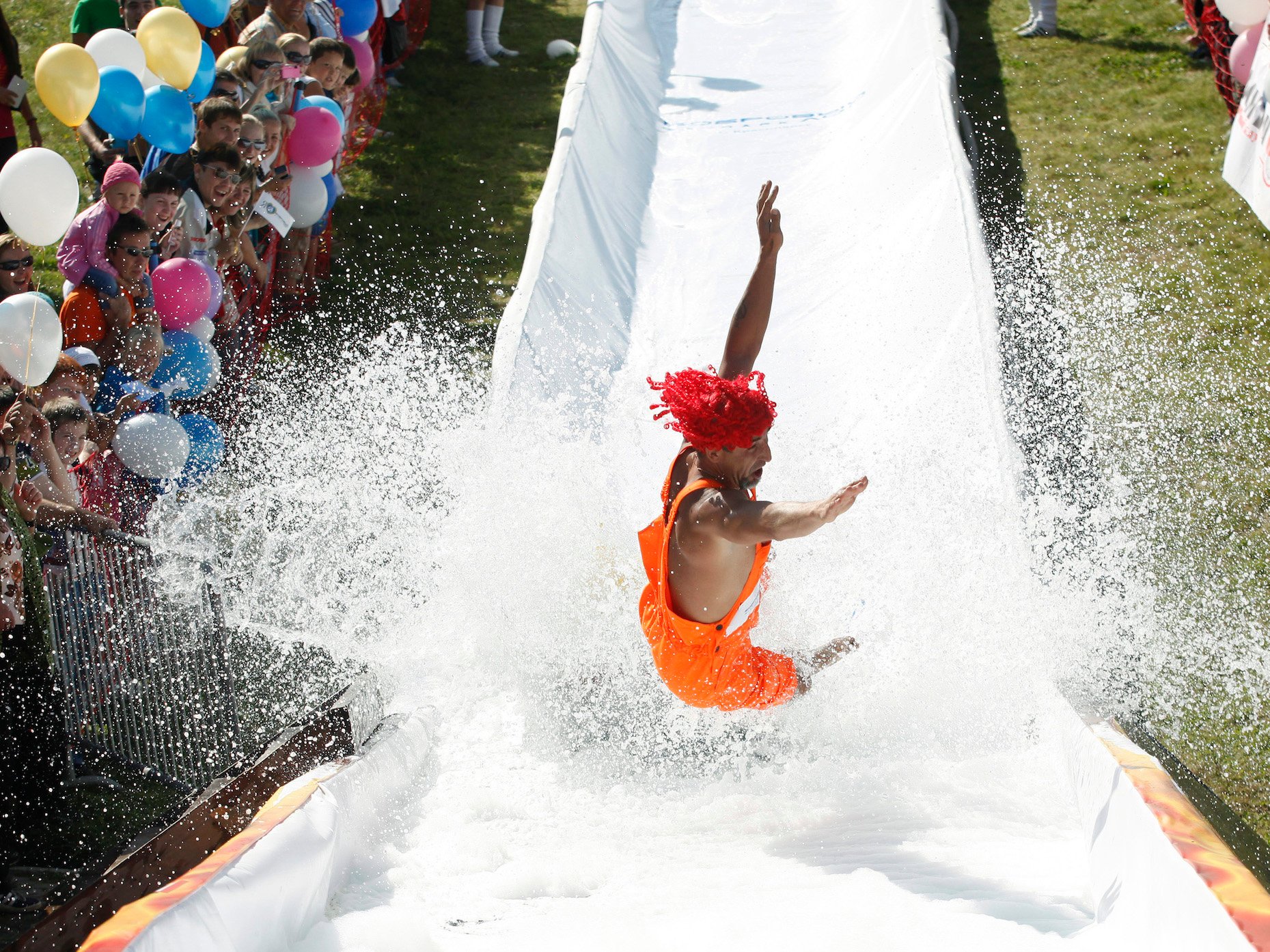 A participant lands in the water as he fails to cross a pool of water and foam on an inflated item.Ilya Naymushin/Reuters

Stocks fell early on Tuesday before attempting a comeback during the afternoon.

However, all three major indices still finished in the red.

First up, the scoreboard:

1. United Airlines’ shares plunged after forcibly kicking a passenger off a plane. Shares were down by 2.6% in the afternoon, recovering some of their losses after being down by about 4.3% earlier in the day.

2. The Japanese yen spiked by 1.1% to its highest level since November. The current appreciation of the yen, which is traditionally considered a “risk-off” trade, comes amid a time of heightened geopolitical uncertainty in North Korea and Syria, as well the looming French elections. In other FX news, theKorean won closed downfor the sixth consecutive sessions, and for 10 out of the past 11.

3. Job openings rose more than expected, while hires fell. Job openings in the US increased to 5.743 million in February, according to the Bureau of Labor Statistics. The quits rate, which is a gauge of how confident workers are in being able to find new jobs if they resign, slipped to 2.1% from its postrecession high of 2.2%.

4. Trump said small businesses were “unable to borrow from banks” — but small-business owners disagree. The president blamed the post-financial-crisis Dodd-Frank banking regulations, which were enacted in July 2010, and higher capital requirements for the largest financial institutions. Trump said he planned to “streamline” or “eliminate” Dodd-Frank to allow small businesses to borrow again. Trump’s narrative, however, is the opposite of what small-business owners are saying, according to a survey from the National Federation of Independent Businesses.

5. Treasury yields sankamid renewed uncertainty surrounding geopolitical tensionsin the Middle East and on the Korean peninsula. Aggressive buying has yields down as much as 7 basis points in the belly of the curve, and testing their recent lows. Meanwhile, bitcoin spiked.

6. Dialog Semiconductor plunged after an analyst warned Apple may use fewer of its chips. Shares fell by as much as 16% on Tuesday after Karsten Iltgen, an analyst at Bankhaus Lampe, said in a note that there is “strong evidence” Apple is working on its own power-management integrated circuits, according to Bloomberg.

The dark horse candidate in the French election who wants to slap a 100% tax on the rich is surging in the polls.

OPEC is over-delivering on its pledge.

RAY DALIO: I don’t think we’re going to have a radical change in the economy.

GOLDMAN SACHS: Hedge funds might finally have something to be happy about.

Art Cashin slaps down the myth of the Black Friday stock market crash.

Tesla shares could go higher, but investors shouldn’t get overconfident.

NOW WATCH: Children who eat too much sugar are developing diseases that only alcoholics used to get