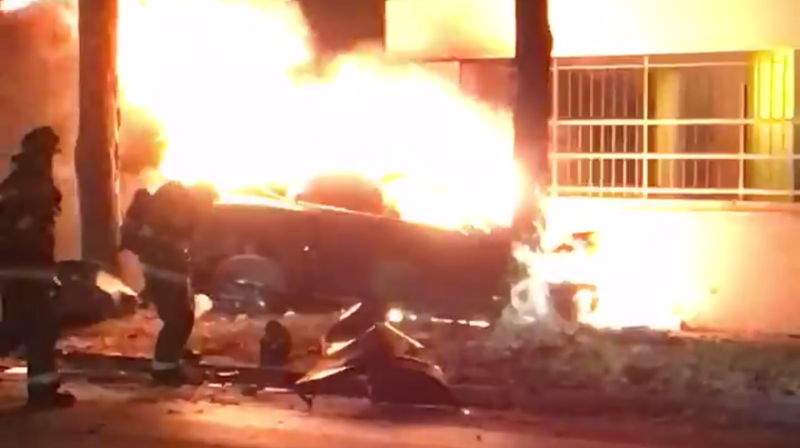 A Tesla Model S crashed into a tree in downtown Indianapolis early this morning, killing both of its passengers and bursting into flames, WTHRreports. The crash sent battery cells “firing off almost like projectiles around the rescuers,” Indianapolis Fire Department told the news site. You can see it yourself in a shocking video of the crash scene.

The Tesla’s driver, a 27 year-old, and her 44 year-old passenger were allegedly driving at a “high rate of speed,” IFD Battalion Chief Kevin Jones told WTHR, when the driver lost control and slammed into a tree. The driver was pronounced dead on the scene, the passenger later died in the hospital.

Here’s video recorded by someone walking past the scene of the crash:

A big concern about electric vehicle battery packs is that they are often composed of hundreds of little cells that can (but are designed not to) start a chain reaction in the case of a fiery failure. We saw something similar in a recent robot-torching fireball at NASA’s Jet Propulsions lab.

Back in June, after installing a new lithium-ion battery into its ape-inspired RoboSimian and… Read more Read more

Here’s part of the IFD’s press conference, which includes a description of how the fire department prepares for hybrid and electric vehicle fires by studying automakers’ emergency response guides.

It’s worth mentioning that, in the press conference above, Jones talks about how fires like these happen when there are high speed collisions, regardless of fuel source, saying:

With any vehicle collision, regardless of its… power… be it gasoline, or hybrid or pure electric like the Tesla is, you have the potential for violent collision and all that damage… that’s not unique to the accident last night.

We reached out to Tesla for comment, but were referred to the press conference above.

This Is The Fourth Tesla Fire This Year

Another Tesla Model S Caught Fire After A Crash In Mexico