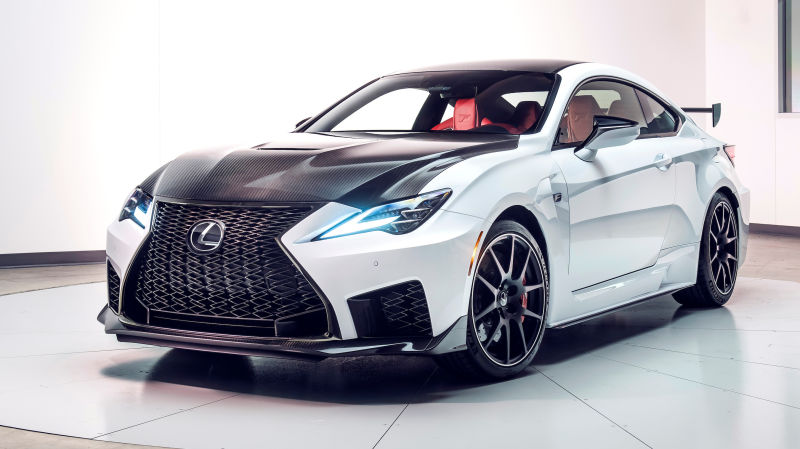 If you’re looking for a track-friendly sports car, the first brand that comes to mind probably isn’t Lexus. But now it looks like Toyota’s luxury side is looking to change that with the new Lexus RC F Track Edition.

To improve its track worthiness, the new model is 176 lighter than the last RC F and has some new aerodynamic features. Among them are a downforce-inducing front splitter and a carbon fiber rear spoiler, the latter of which, Lexus says in a press release, allows the car to make up to 58 more pounds of downforce, and also reduces drag.

Fifty-five pounds of the overall weight lost, Lexus says, come from a newly designed set of BBS wheels and more performance-ready Brembo carbon ceramic brakes. Other weight was lost with help of a new carbon fiber roof and hood, and a new titanium exhaust. Though even with all of that weight savings, the Track Edition still comes in at a fairly hefty 3,782 pounds.

The new model was announced alongside the refreshed RC F. Both the standard RC F and the RC F Track Edition get a 5 HP bump from the same engine that was in the pre-refresh car’s engine, a naturally aspirated 5.0-liter V8 that now puts out 472 HP. Both the standard and Track Edition models also get stiffer and lighter suspension bits, more aggressive engine mounts, and redesigned headlights and taillights. The two cars also get a new launch control system that allows the RC F to shoot from 0 to 60 in 3.96 seconds, according to Lexus.

For our suspension nerds, here’s what Lexus specifically says has been changed up from the previous model:

At the rear, hollow half shafts are now used in place of the previous solid shafts while up front a pared down intake manifold and a smaller air conditioning compressor remove weight from the front of the car. Changing to aluminum for the toe control brackets and upper suspension support brackets also reduces weight while maintaining stiffness.

To further refine the feel of the RC F, there are now stiffer bushings for the rear suspension arms and steering rack mounts﻿

Pricing has not yet been announced for the Track Edition or the standard, refreshed RC F.

Do you think this thing could actually attract serious track rats? Could it actually be “more than a mere accessories package,” like Lexus claims in its press release? We’re going to get a closer look at this thing on the Detroit Auto Show floor later today to find out.