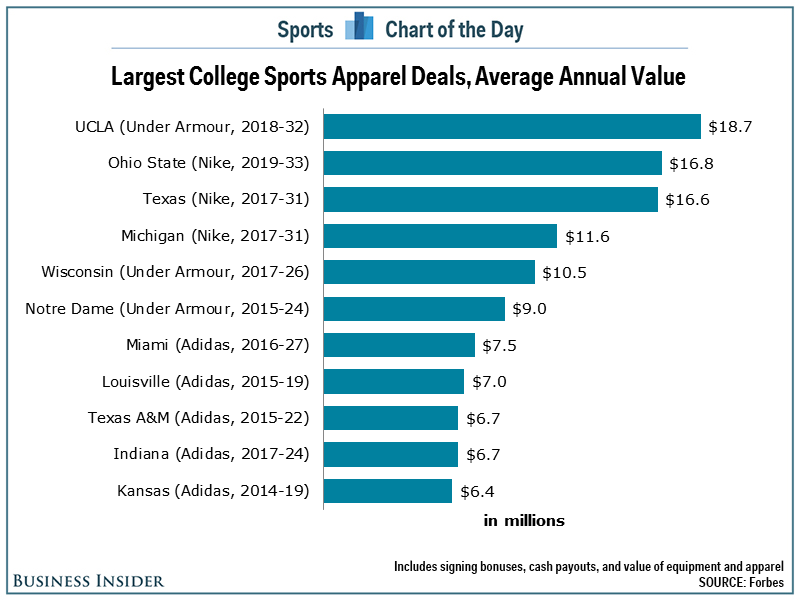 On Wednesday, UCLA reached a deal with Under Armour that would pay the school $280 million over 15 years to wear and use Under Armour apparel and equipment. It is the largest deal in college-sports history and shows that the value of these types of deals is skyrocketing.

In 2014, Notre Dame, arguably the most recognizable brand in college sports, struck its own then record deal with Under Armour. That deal — 10 years, $90 million — is worth $9 million per year. That seems like a bargain two years later, as UCLA’s contract is worth more than twice as much, with an average annual value of $18.7 million.

In fact, five deals struck in the past two years have exceeded Notre Dame’s, and the values just keep going up — company and years covered by the deal are in parentheses, according to Forbes. The surge in money being given to these college programs is reminiscent of the recent surge in broadcast-rights fees being paid by ESPN and others for the rights to broadcast live sports.

Part of that is driven by demand and value — sports are still one of the only things people prefer to watch live, as it happens, which increases the value of commercials. But it is also being driven in part by the influx in recent years of new rivals — e.g., Fox Sports 1, NBC Sports Network, etc. — and how ESPN is overpaying to keep a stranglehold on its meal ticket: live sports content.

It is much the same in the sports-apparel world. For the first time since the peak of Reebok in the 1990s and early 2000s, Nike has a legitimate rival in Under Armour. As the Maryland-based upstart puts its own mark on the sporting world, Nike must pay more to keep its dominance, and more money is being thrown at schools.