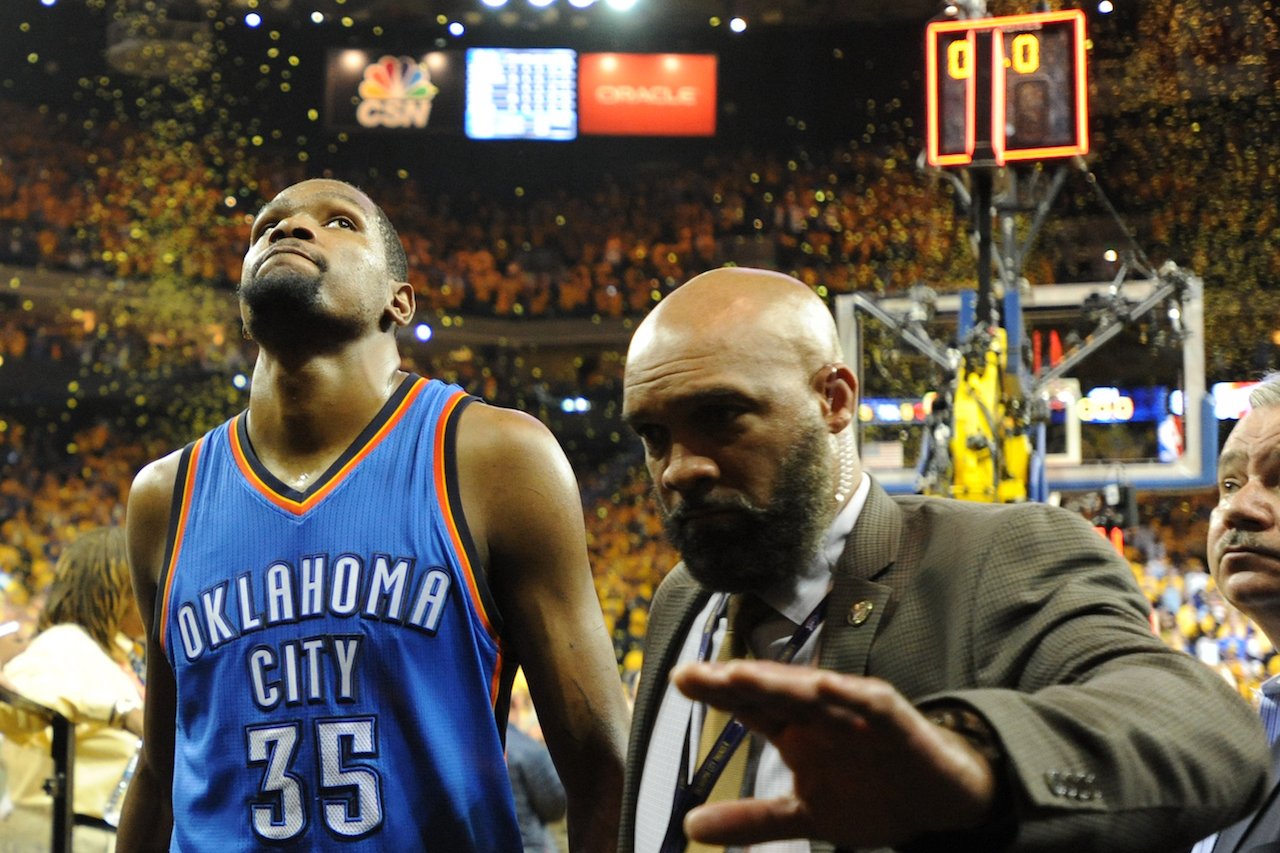 After racing out to an unexpected 3-1 series lead in the Western Conference Finals, the Oklahoma City Thunder lost three consecutive games to the Golden State Warriors, falling in Game 7 and out of the playoffs on Monday night.

It was a valiant effort against the 73-win defending champs, to be sure. But as the Warriors return to the NBA Finals in search of a repeat title, the Thunder will be left wondering how they let such an opportunity — needing to win just one game in three tries — escape them.

They will also be left wondering what will happen to Kevin Durant.

For well over a year, as Durant’s impending Summer 2016 free agency loomed in the distant future, the basketball world has speculated wildly over Durant’s free agency destination. Will the former MVP return to Oklahoma City on a max-level contract, or will he sign a one- or tw0-year deal in OKC in order to sign an even more lucrative max contract after the cap rises? Could Durant return to his hometown and sign with the Wizards? How about the Warriors … if he couldn’t beat ’em, might he join ’em?

For as long as Durant’s free agency has been a topic of conversation within the basketball world, his possible departure has been tied directly to the Thunder’s on-court performance. When the Thunder played well, he was staying. And when they did not — he was soon to be gone.

We saw this in the playoffs. After OKC trounced the Spurs and raced out to a 3-1 lead against the Warriors, the consensus was that Durant had endured too much with his teammates in order to leave town. Appearing on TNT after Game 5, Bill Simmons told Charles Barkley and the rest of the “Inside the NBA” gang that he felt certain Durant wouldn’t sign elsewhere — not even with Simmons’ beloved Celtics.

But Games 6 and 7 of the Western Conference Finals saw Durant emerge as a shell of himself — turning the ball over, missing jump shots, and failing to take over the game as many expected him to, and as the Thunder needed him to. Over the course of one series, the question of Durant’s free agency pivoted yet again.

Now that the Thunder’s season is over, Durant’s free agency has effectively begun (it begins in earnest in mid-June). And after so much speculation, we will finally learn what jersey Durant will be wearing when he takes the court next season.

According to ESPN’s Marc Stein, at least eight teams are expected to seriously pursue Durant.

Some of these are more realistic options than others, of course. It’s hard to imagine the Knicks, Lakers, or Rockets legitimately contending for Durant, considering the competition and their own internal dysfunctions. The Wizards hired former Thunder coach Scott Brooks for transparently obvious Durant-related reasons, but otherwise D.C. — hometown that it is — feels like a pipe dream. The Celtics have an excellent coach in Brad Stevens and enough assets to theoretically trade for another blue-chip player, but would a global superstar like Durant really opt for Boston?

So long as Pat Riley is in charge, it’s impossible to disregard the Heat or their ability to lure big-time free agents to South Beach. A Kahwi Leonard-LaMarcus Aldridge-Durant Big 3, all coached by Gregg Popovich, will have basketball junkies salivating. Not to mention that we saw the Spurs’ ability to sign big-time free agents last summer when they beat out the Lakers to sign Aldridge.

Golden State, meanwhile, is Golden State. But if the Warriors are as serious about signing Durant as reports suggest, there’s no way around them losing some of the key pieces to a 73-win team. Some combination of Sean Livingston, Andre Iguodala, and Andrew Bogut would need to be sacrificed, while a potential max-deal for Harrison Barnes complicates a Durant signing further. If you are the Warriors, do you really want to retool a lineup that set a regular-season record and has you on the verge of back-to-back championships? Conversely, do you really want to pass up a legitimate chance to sign Durant?

After Game 7, Durant said he hadn’t thought about his free agency, lamenting instead his team’s playoff exit.

The longer Durant deliberates, the more rampant the speculation will grow. Expect his decision to be the talk of the NBA this summer.