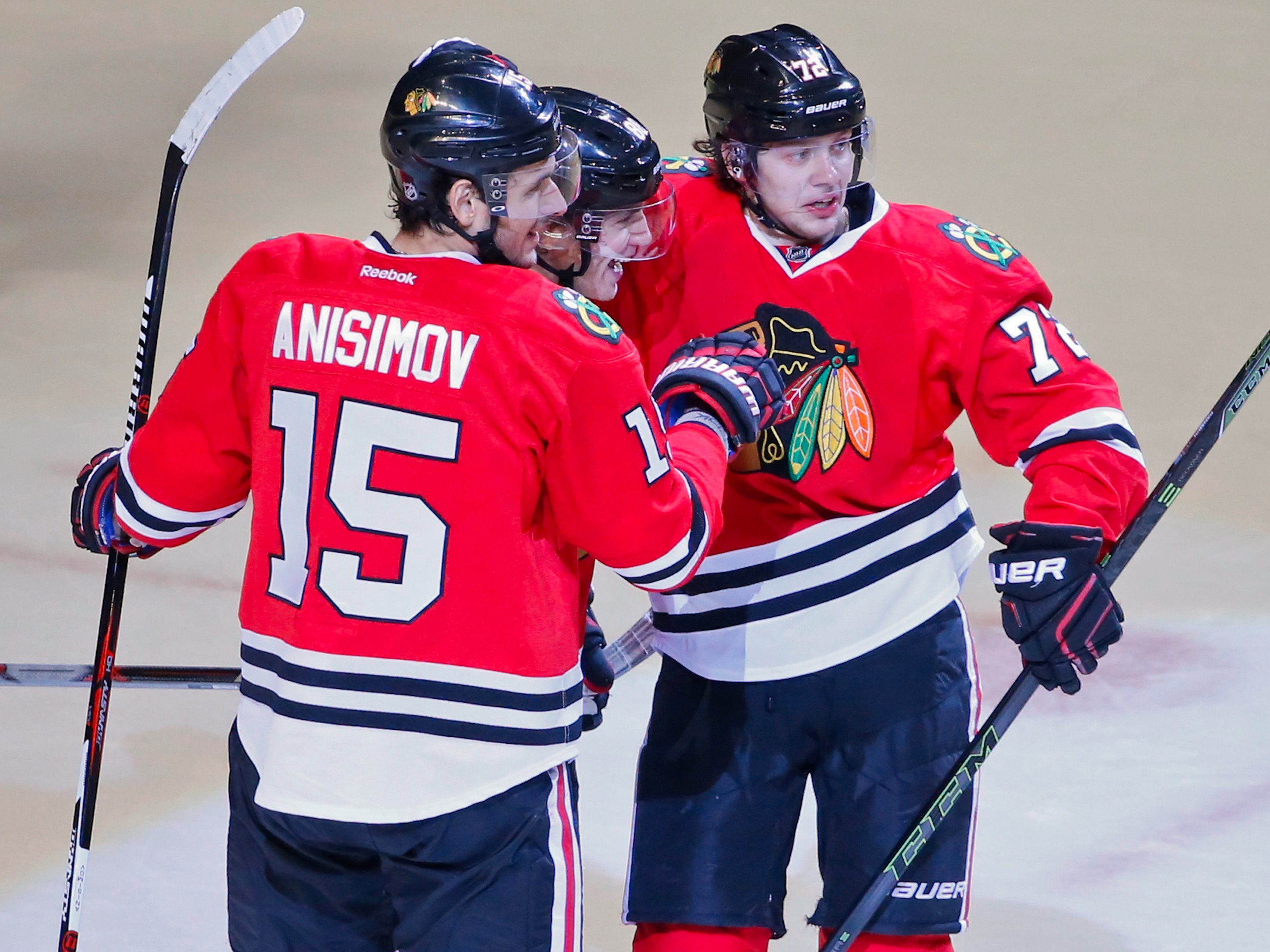 AP/Kamil KrzaczynskiChicago Blackhawks left wing Artemi Panarin, right, celebrates after scoring an empty-net goal on a assist from Patrick Kane, center, as center Artem Anisimov joins them, during the third period of a game against the Winnipeg Jets.

Chicago Blackhawks General Manager Stan Bowman was forced to make some difficult decisions this past offseason.

His team had just won its third Stanley Cup in the last six years, and he was faced with the daunting task of another rebuild in the National Hockey League’s salary-cap era.

But there were two moves that Bowman made that have the Blackhawks contending for their fourth Stanley Cup in the last seven years: the signing of Russian winger Artemi Panarin and the trade for Artem Anisimov.

Expectations were for the NHL’s salary cap to increase to over $75 million in the 2015-2016 season, from $69 million the prior season.

However, the weakness of the Canadian dollar weighed on league revenue, and the salary cap was set at $71.4 million. This meant even less wiggle room for Bowman, who was already facing major cap constraints as superstars Patrick Kane and Jonathan Toews each created $10.5 million hits against the cap, the highest in the NHL.

Technically, Panarin was signed on April 29, but he didn’t make his Blackhawks debut until the 2015-2016 season. Bowman was able to pluck Panarin from SKA St. Petersburg of Russia’s KHL with a two-year deal at $3,387,500 a season. Panarin has been nothing short of spectacular in his rookie campaign, amassing 22 goals and 35 assists in his first 59 career NHL games. He leads all rookies in points, goals, and assists.

On Wednesday night, he netted the first hat trick of his career (three goals in a game) while leading the Blackhawks to a 5-3 win over the the New York Rangers in Madison Square Garden.

After the contest, Blackhawks Head Coach Joel Quenneville told reporters, “He’s been great for us … the consistency, the contribution to that line, the power play, the puck-possession game, the offense from Day 1. He’s been fun to watch. He’s enjoying himself here.”

The other big offseason move for the Blackhawks was the trade that sent impending free agent Brandon Saad to the Columbus Blue Jackets for centerman Artem Anisimov, who was also set to become a free agent. While Saad signed a six-year deal for $6 million a season, the Blackhawks inked Anisimov to a five-year, $22.75 million contract.

Anisimov has found himself skating between Kane and Panarin, creating one of the most intimidating lines in the NHL. In 60 games with the Blackhawks, Anisimov has managed 18 goals and 15 assists. His 33 points are good for sixth in scoring on the Blackhawks, who are the sixth-highest scoring team in the league.

“He’s been a very big part of our team this year,” Coach Quenneville said of Anisimov following the Blackhawks 5-1 win over the Dallas Stars on February 6. “Everybody does something a little bit something different, but Artie [Anisimov] playing on the penalty kill, and taking face-offs, and on the power play, and making that line go. He’s been terrific in a lot of ways.”

Both Panarin and Anisimov have been integral in the success of Kane, who leads the NHL in points (83) and could become the first American-born player in the league’s history to win the Hart Memorial Trophy, given to the most valuable player during the regular season.

More importantly for the Bowman and the Blackhawks, the duo has the team in contention for its fourth Stanley Cup in seven years, which would erase any doubt the Blackhawks are the newest dynasty in pro sports.

SEE ALSO:STEPHEN CURRY: Here’s a look at the marvelous life of the greatest basketball player in the world

NOW WATCH: Putin played a hockey game with ex-NHL players for his birthday and scored 7 goals