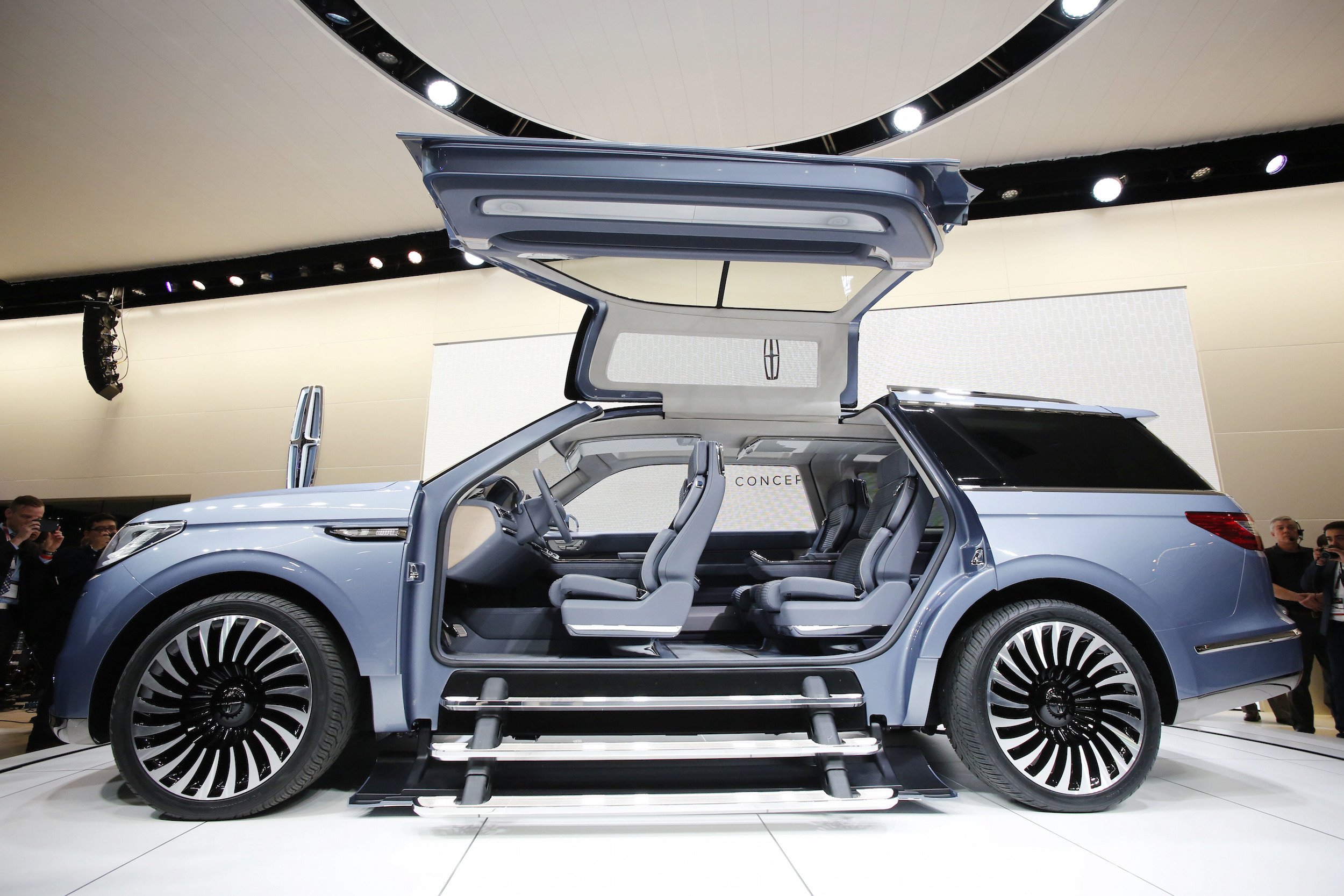 In the car business, impressions matter. But for a big chunk of the 2000s, the impression Lincoln made was that it didn’t matter.

Lincoln has been around since 1917 and has been part of Ford since 1922. Over the decades, it established itself as first a premium and later a luxury brand, minting several icons along the way: The Continental, which became a presidential limousine, and later the Navigator, the first large luxury SUV.

In the early 1990s, Lincoln was selling nearly a quarter-million vehicles a year. But by 2014, it was struggling to sell 80,000. During the financial crisis and meltdown of the Detroit auto industry, there were calls for Ford to shutter Lincoln.

Ford’s then-CEO, Alan Mulally, was keeping his company out of bankruptcy, shedding luxury brands such as Jaguar and Land Rover, and unifying his far-flung employees around an inspiring “One Ford” message. There were rumors that the brand was on the chopping block in 2010-2011, but Mulally decided against shuttering it.

He reportedly wanted to ditch Lincoln again last year, when as Automotive News reported “sales fell to a 32-year low.” Ford’s now-CEO, Mark Fields, talked Mulally out of it.

Lincoln didn’t have much — an aging big SUV that cost more than $100 to gas up, a lineup of uninspiring sedans, and importantly, no Continental — but it did have one thing going for it: The guy who would end up running Ford wanted to keep it.

“We made a very big commitment to Lincoln about three years ago, saying we want to turn Lincoln into a world-class luxury brand with a client experience to match,” Fields said in an interview with Business Insider CEO and Editor-in-Chief Henry Blodget on the eve of the New York Auto Show.

“And we’ve had a lot of success implementing that strategy. We grew our sales and our market share two years in a row. In the first couple of months of this year our sales are up 19%.”

It goes without saying that this is costing Ford billions. When the US auto industry was first showing signs of recovery in 2011-2012, industry observers could scoff at Field’s enthusiasm, even though the luxury space is certainly profitable. “Strategically it’s important,” Fields told BI. But the luxury space is also crowded. In the US alone, Lincoln’s crosstown rival, Cadillac, is competing with BMW, Mercedes, Lexus, Audi, Acura, Infiniti, Porsche, and a new arrival, Hyundai’s Genesis brand, for affluent customers. Most of those players sell extremely compelling cars and SUVs. Their buyers, on the whole, are younger than the traditional Lincoln owner (although Lincoln has been doing pretty well with younger buyers of late).

Their buyers are also repeat customers: Some BMW 3-Series sedan owners are probably on their fifth or sixth car at this point.

And in the world’s other very important luxury market, China, automakers are also moving aggressively to grab share. Fields was certainly thinking in this direction when he pressed Mulally to spare the brand the fate of its stablemate, Mercury, which was rolled up in 2011. Ford would need a clear luxury brand to take on GM’s Cadillac and Buick in China — the latter a Mercury rival in the near-luxury market in the US, but a longtime true luxury brand in the Middle Kingdom.

So far, Lincoln in China has been fairly impressive: The carmaker sold about 12,000 vehicles there in 2015, well behind Cadillac’s almost 80,000, but not bad for a new arrival. Expansion plans are robust, with 60 new dealerships opening in 2016.

Whisper to the thunder

The Lincoln revival has really gained momentum in the past two years, for reasons that are somewhat difficult to reconcile, but, viewed in retrospect, that are also evidence of some out-of-the-box thinking at Ford.

One aspect of this was literally on display at the New York Auto Show last week, when Lincoln revealed its second spectacular concept car in as many years. The Lincoln Navigator concept is an over-the-top update to the stalwart SUV: It was inspired by the world of yachting, with huge gullwing doors, nautical teak details, and an interior that merges the Lincolns of the 1960s with the Jetsons and Mies van der Rohe. It has to be seen to be believed.

It follows the auspicious revival of the Continental nameplate. Lincoln showed the concept version of that car at the 2015 New York Auto Show, to crowds that were giddy to see the Rat Pack-era car make a comeback. The production version was the queen of the 2016 Detroit Auto Show, the centerpiece of a vast and glittering Lincoln stand that looked like the most stylish ocean liner on the seas. These new Lincolns are bold, but not obnoxious. They embody the brand’s new direction, a focus on what Fields and Lincoln president Kumar Galhotra call “quiet luxury.” The idea is to zig when everyone else is zagging. The success of BMW, Mercedes, and Audi in the luxury market had convinced the industry that it needs to sell high performance along with sumptuous seats. This has translated in aggressive vehicles with powerful engines aimed at delivering a track-worthy driving experience, even if your only track is a suburban boulevard.

Lincoln doesn’t want to go there. “We’re not trying to out-German the Germans,” Fields told BI.

That might all sound a bit too subdued to take customers from the Germans, but to spur its revival, Lincoln did something so, well, strange that it’s likely to go down in the annals of advertising as one of the biggest risks in marketing. The brand hired Matthew McConaughey as a spokesman and created a dreamy, stream-of-conscious campaign around him that immediately went viral, captivating the late-night talk-show circuit and putting Lincoln back on the world’s radar. McConaughey was on hand in New York for the Navigator concept reveal and said that he expected to be working with Lincoln for another few years. According to Galhotra, the brand’s goal now is to evolve his character as Lincoln introduces new and refreshed cars and trucks.

What began with moody, evocative meditations while driving around in an MKC crossover has morphed into a jaunt to a stylish poker night and a sushi run in a current-generation Navigator with a pair of dogs who would prefer barbecue. It remains to be seen what will happen when he takes the wheel of a Continental or the production version of the new Navigator.

I was a staunch Lincoln skeptic back when the brand looked, frankly, pathetic. But I changed my tune when I took a more serious look at both the existing vehicle lineup and began to report on the revival. And the numbers don’t lie: Lincoln’s momentum in the past few years is undeniable.

Some of this can be chalked up to the simple fact that Ford can build some solid trucks in all shapes and sizes and then turn them into Lincolns, so when the market shifted to those segments as gas prices plummeted, Lincoln had the right products at the right time.

But it would have had those vehicles in any case. The penumbra of rebranding is definitely moving the needle with buyers. The McConaughey ads coincided with the actor’s Oscar win and star turn in movies such as “Interstellar” and on TV in “True Detective.”

And the whole “quiet luxury” tagline expresses an idea that many luxury buyers would echo, if they hadn’t been hit over the head for a decade with the notion that their car needs to get them to the office on weekday and turn impressive lap times on the weekends. Galhotra has told me on several occasions that while Lincoln customers want a powerful automobile, they don’t really care about the horsepower numbers. As long as the car feels like it can go, that’s enough.

Is that a little thing? Maybe. But for Lincoln, little things mean a lot. And so far, the brand has swung for fences when it needs to, especially in New York around auto-show time.

It adds up. And before you know it, the impression you’re making is huge.

SEE ALSO:Lincoln just sealed its comeback with this Navigator concept