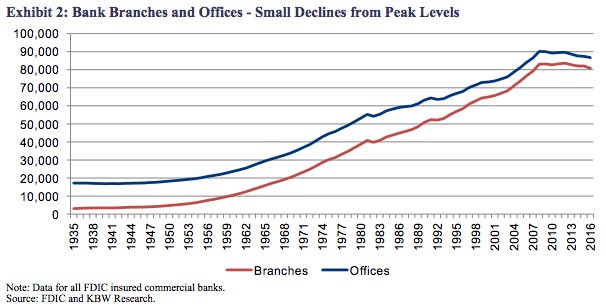 The total number of US bank branches is down only 3.5% from peak levels.KBW

Online banking is all the rage. But that doesn’t mean bank branches have been rendered irrelevant.

Bank of America’s mobile customers reached 22.2 million in the first quarter of 2017. And JPMorgan, which boosts 27.3 million mobile users, is making a number of investments in digital banking.

But according to a recent note penned by equity analysts at Keefe, Bruyette & Woods, Inc, the New York-based investment banking firm, the total number of US bank branches is down just 3.5% from peak levels. That’s because they still serve a valuable purpose.

For starters, their physical presence serves as a powerful reminder to consumers about the brand. Therefore, when a bank closes a branch they often end up spending more in other areas such as marketing.

“We agree with bank managements that shrinking branch numbers cannot be a simple cost savings for banks as it reduces the presence of the institutions to consumers even if consumers are not going into the branches,” the report said.

In addition, with interest rates set to increase bank branches could see their value proposition increase.

“As interest rates rise, the economics of branches will improve despite rapid changes in technology,” the study said.

As such, instead of a decline in branches, it is more likely that bank branches will shrink.

“There does not appear to be a consensus to increase or reduce the number of branches significantly. Rather, there seems a view towards reducing the square feet of existing branches and some modest consolidation. Thus, with the economics of branches improving and no plans for bankers for radical downsizing, we expect the trend towards only very modest reductions in branch numbers to continue.”

“The branches are a great source of deposits. We recognize that and I think that’ll become even more important as we move into a higher interest rate scenario. At the same time, you’re also right that transactions in a branch are reducing, so 60% of transactions today are done digitally outside of the branch. So what we’ve done, and we will continue to do, is change the footprint of the branch in terms of reducing the square footage, and we’ve done that for the past few years and we continue to focus on that.”

And here’s Marianne Lake, CFO of JPMorgan, from April 13:

“But I will say that if you – we look at the performance of our branches every single week, month, individually, put together by market, and the very, very, very, very, very vast majority of them, meaning that only a handful do not, are profitable in their own right today at these spreads on a marginal basis. So the branches are doing very well.”