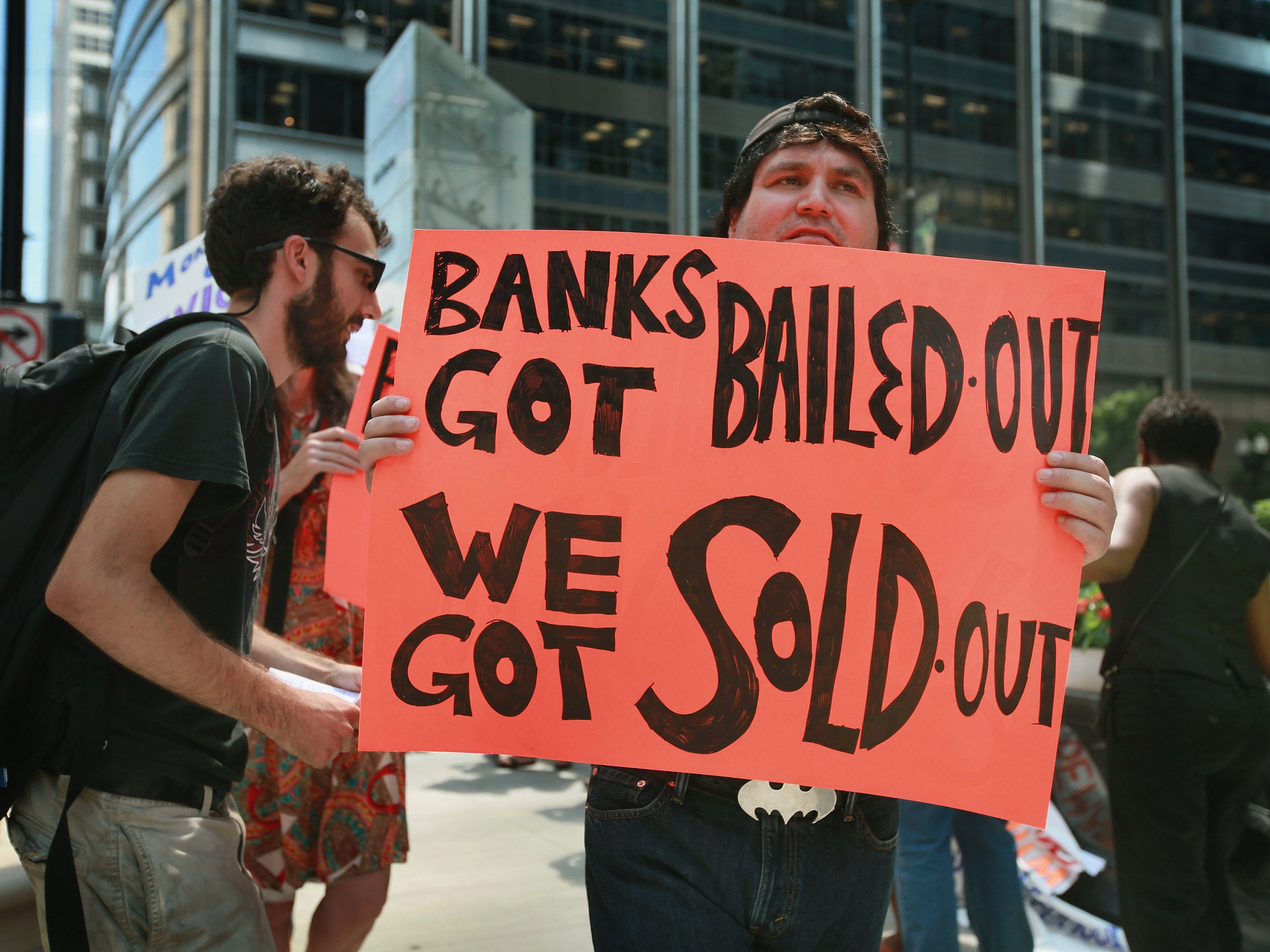 Scott Olson/Getty ImagesDemonstrators from Occupy Chicago, the Chicago Anti-Eviction Campaign, and Communities United Against Foreclosures and Evictions protest outside the regional offices of Fannie Mae on July 30, 2012, in Chicago, Illinois.

From stocks crashing to the housing market blowing up to unemployment skyrocketing, there’s a reason it was called the Great Recession.

According to Liz Ann Sonders, chief investment strategist at Charles Schwab, this experience has scarred the way Americans see the economy and will continue to do so.

“When you look at how people are acting towards the economy, you can see how big the effect was from the recession,” Sonders told Business Insider.

“It really kind of changed the psyche of a generation.”

And the signs are everywhere, according to Sonders. Some of the biggest and clearest are the decisions Americans make on whether to spend their money or save it. Sonders cited studies down by credit-card giants MasterCard and Visa that has showed consumers are now using 0ne-third of their income apiece on spending, saving, and paying down debt.

This is much more equitable than in the past.

Additionally, this effect has become more pronounced since oil prices have dropped. Typically, lower prices at the gas pump have inspired people to reallocate those funds toward consumption, but that hasn’t happened this time around.

And this change in attitude also shows up in the way Americans treat debt, according to Sonders.

“Everyone used to love leverage, and now that’s no longer the case,” said Sonders. “People have an unwillingness to take on debt since the recession. There really is something to be said for the muscle memory of 2008.”

Instead of going through a normal cycle of deleveraging coming out of a recession and then resuming taking on debt, Americans have continued to pay down bills and eschew additional debt-powered consumption.

The personal-savings rate indicates that Americans are allocating more of their income toward savings. Additionally, Americans have a lower debt obligation compared to their income, according to the Federal Reserve. Another area this shift is showing up in is how the average American is treating the stock market.

“Since the financial crisis people have had very little interest in the stock market,” said Sonders.

In fact, according to Sonders, based on net demand for stocks, there has not been a single dollar put into the stock market by pension funds and individual investors since the end of the crisis.

And in Sonders’ view this seismic attitude shift toward stocks, the economy, and personal finances may not change for a long time to come.

SEE ALSO:The real economy and markets are so far apart they look like ‘two parallel realities’

NOW WATCH: Canadian Prime Minister Justin Trudeau is becoming a cult hero in the US — here’s why