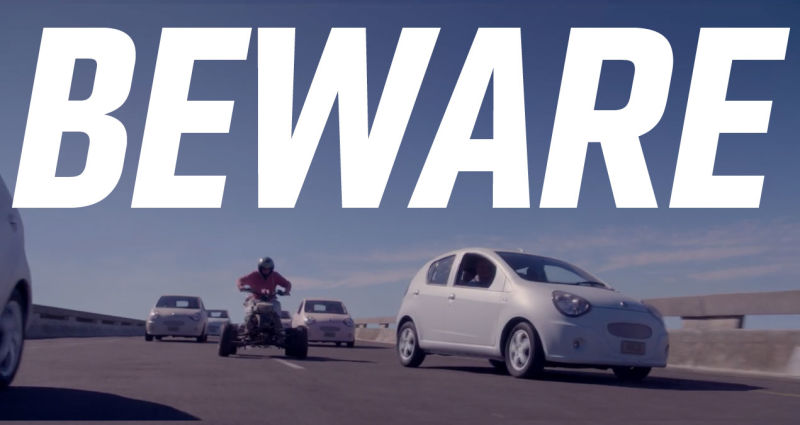 The third season of the acclaimed thought-provoking British series that satirizes and examines our modern technology-marinated lives has just been released on Netflix. The first episode, Nosedive, is primarily a scathing take on social media, but it also describes one of the most plausibly grim futures for cars.

I don’t think the writers considered their depiction of cars as a particular goal for the episode, but it is an evocative and coherent vision, and for anyone who loves cars, it’s about as close to hell as you can get while still having human-driven cars.

I’ll try to keep spoilers at a minimum here, so let’s just describe the episode as taking place in the relatively near future, familiar to ours but absolutely dominated–more so than ours, even–by social media and the idea of ranking people. While there’s a lot of reasons why society wouldn’t actually end up like this, it does make an effective statement about much of our lives.

You can watch it and decide on your own, though, because I just want to talk about the cars in the episode. The carscape of the world portrayed is one that’s obviously quite specifically selected, and it’s the soulless, logical conclusion of every article that talks about how much Millennials don’t give a shit about cars.

All the private cars shown are electric; there’s a big rig and an RV that seem to be diesel, but every passenger car seen is electric. In itself, that’s not necessarily bad: movies like Gattaca, for example, portrayed an all-electric world filled with incredible electric Avantis and Citroën DS0es and other lovely classics.

The world shown in Nosedive, though is one where cars are treated with almost total apathy. There’s only three actual passenger car types seen, not counting the big rig and the RV.

Whoever cast these cars did a very good job. None of the cars are ones that are imported to the American or Western European markets, at least not in any large numbers, which helps make them seem more ‘other.’ Here’s the cars, in order of appearance:

The 2005 and up second-generation Japanese Domestic Market Toyota bB (other versions of this car were called the Scion xB in the U.S.) are used exclusively as cabs in the portrayed world. I’m a fan of the box-on-wheels in general, but here it seems to be quite restricted to taxi duty.

We do see plenty of other cars, but they’re almost all these:

The Geely LC is a popular Chinese car best known for sort of looking like a panda into whose hands you’ve just shoved a cookie bouquet. I don’t actually mind the LC in general. I sort of like its absurdly happy face and glass rear hatch, but that mild affection is heavily predicated by the fact that it exists in a world full of all manner of other kinds of cars.

In Nosedive, it’s the onlycar you really see, and it’s always white. And that right there—only one basic model of car, in only one color—is about as close to automotive hell as I can imagine.

Once you eliminate variety and novelty from cars, you gain incredible ease of servicing and much more efficient parts production and distribution, but the cost is your very automotive soul.

The sight of roads teeming with one solitary kind of car is as terrifying to me as anything Black Mirror has yet to dish out, and that includes graphic scenes of a world leader fucking a pig.

This is the only car that gets a specific model name: iCruiser 2. Based on the next line “They still have the two?” I think we can safely assume that the other Geely cars must be iCruiser [somenumberbiggerthantwo].

The Matiz is a stand-in here for an older model of iCruiser, and it looks a good bit clunkier and shabbier than the other cars, even though it really doesn’t seem all that much older.

A major plot point revolves around the type of charger used for the iCruiser 2 is no longer available, which just makes this world’s automotive life even more miserable, because it implies several things:

• There’s no respect or interest in any car older than the most current model, not unlike how smartphones are generally treated

• Even with the rampant standardization and homogeneity, there still manages to be annoying incompatibilities, making you question why you had to give up anything individual or interesting in the first place

• Cars of this world are not designed to age well, again, like smartphones.

Really, for as often as car makers like to describe their cars as ‘smartphones on wheels,’ this episode of Black Mirror may prove to be the best example of why this concept is so deeply, unsettlingly awful.

You want to make cars that are like smartphones? Have a look here. Everyone has the latest, nearly identical-looking model, nobody cares about the machines themselves, they’re interchangeable commodities without any character.

Plus, when we get a look inside the cars (in this case, the older iCruiser 2) we see an entire touch-based interface, with a windshield capable of displaying all sorts of controls and media.

It’s interesting that these cars aren’t autonomous; if they were, it would actually be better, because then all of their grim monochrome ubiquity would sort of make sense. The car would then completely fade into the background of living, turning into something else, no longer a car, but an automated personal transport. That would still leave a place for enthusiast human-driven cars to exist.

But here, they’re still basically driven like normal cars, just with many more distractions, no pleasure from the act of driving, and an interior full of touch controls that have to drive you batshit.

It’s hell. It’s automotive culture falling prey to a monstrous, unquenchable apathy. Even if you don’t think you’re interested in cars, I suspect that you’d find living in this world of identical white electro-shitboxes would be deeply depressing.

I live in a bubble. It’s a wonderful oily bubble that’s noisy and smells like gasoline. It’s a… Read more Read more

Are there laws legislating a single model of car that can be driven? Do people just all chose the safe, unremarkable choice? Is interest in cars just dead here? None of these answers is anything less than terrifying.

I’m pretty sure it’s not the message the writers of Nosedive wanted me to take away, but I see this episode as a prophetic warning: we cannot keep trying to make cars that are like “smartphones on wheels” until we fully realize where that line of thinking takes us.

It takes us here. And it’s hell.

The Cars Of Stranger Things Are As Perfect As The Show, Except For One Mistake

The Most Important Mystery In Stranger Things Has Been Solved

The Best Sci-Fi Cars Of All Time