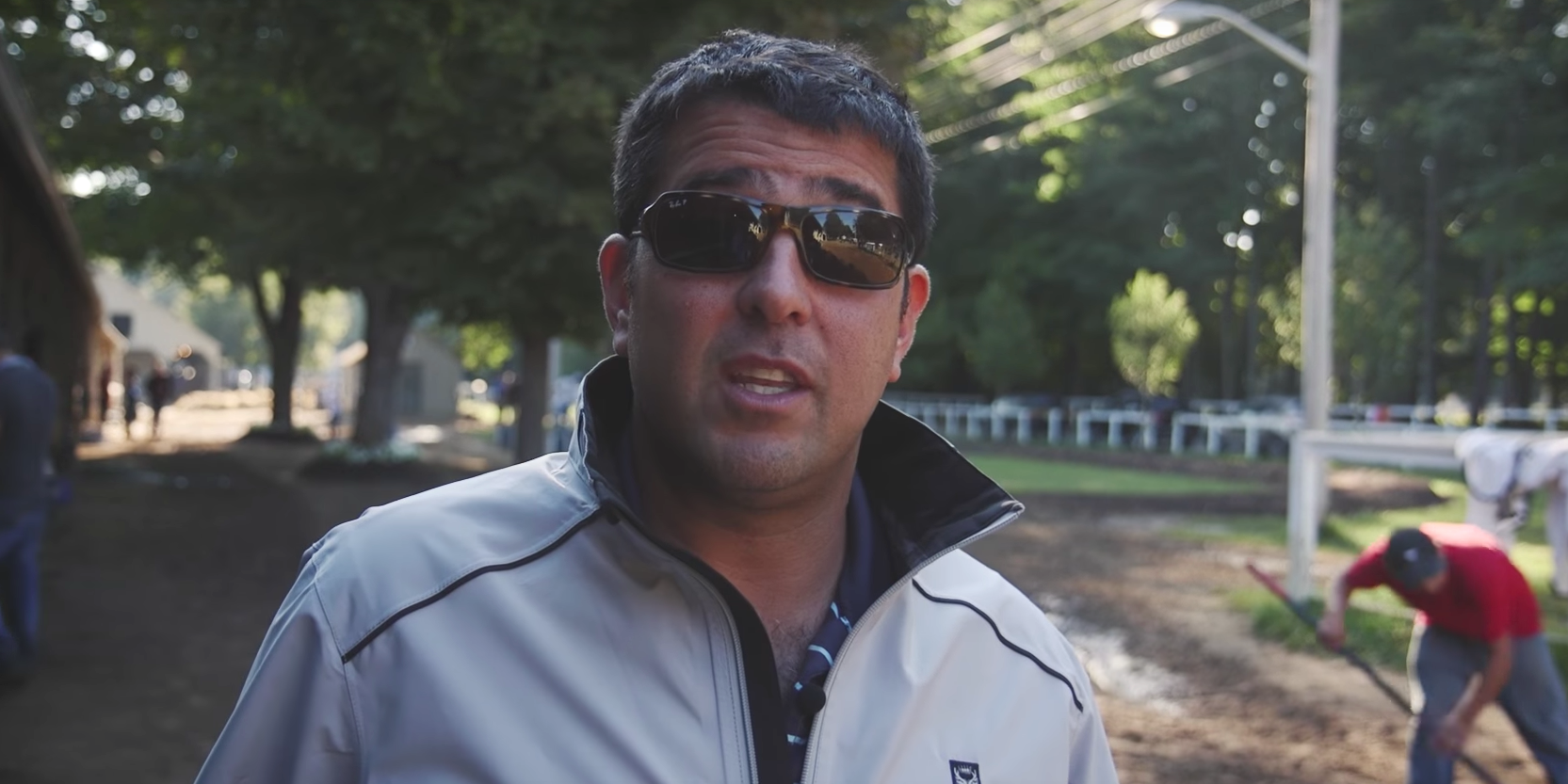 Sol Kumin is interviewed ahead of a horse race.YouTube/America’s Best Racing

Sol Kumin launched his New York-based hedge fund in 2015 to much fanfare.

Kumin, who had recruited some of Steve Cohen’s top traders while working at the billionaire’s high-profile fund, SAC Capital, is known for his boisterous personality and salesmanship.

But Kumin’s fund, Folger Hill Asset Management, has faced setbacks. Though it has recently made slight gains, the fund, which invests in stocks, is down approximately 20% since its launch — while stocks were in a raging bull market. Last year, assets dropped to a low of about $600 million from a peak of $1 billion earlier in the year.

The firm lost some of its big backers along the way, including Goldman Sachs and UBS. In recent months, several senior staffers have left. The pressure is now on to find a strategic partner — a move that would give Folger Hill breathing room.

Kumin, who has been hustling to find one since last year, says he is optimistic.

“We are highly encouraged by the level of interest we’ve received to date and by the progress made with several prospective partners,” he wrote in a recent letter to investors that was reviewed by Business Insider.

That kind of partnership would boost assets in Folger Hill’s US business and allow the firm to hire more traders with different sector focuses, a person familiar with the matter said. It would also mean the fund would sell a bit of itself, a common way for startup hedge funds to raise money.

In exchange, Folger Hill is looking to raise $300 million to $400 million with a lockup of several years, the person said, adding that the talks with potential partners were in advanced stages.

This article is based on interviews with people who spoke on condition of anonymity so as not to harm professional relationships or because the information they shared was private. Other information was sourced from private documents, such as marketing materials and investor letters, that were reviewed by Business Insider.

Folger Hill’s is a story of a vaunted hedge fund manager who left the gate with negative returns — not uncommon, as many hedge funds today struggle to post gains — and what can be done to turn it all around. It also highlights how difficult it can be to launch a hedge fund these days, despite pedigree.

The stakes are high, and many funds don’t succeed. Last year, Blackstone’s Senfina Advisors, another multimanager platform that launched around the same time as Folger Hill, closed after its performance dipped precipitously. Kumin knows the hedge fund industry well, having grown up at one of the most successful — and notorious — funds on Wall Street.

Before starting his fund, Kumin spent nearly a decade working at SAC Capital, a Connecticut hedge fund founded by Cohen, the billionaire investor. Kumin helped raise money for the fund and run the day-to-day operations so Cohen could focus on trading.

SAC was shut down after it pleaded guilty in 2013 to insider trading, a story that has spawned pop culture depictions like the TV series “Billions.”

Kumin, who is close to Cohen, made millions working at SAC, according to a New York Times report, and left in 2013 after SAC reached a settlement with the government.

Cohen and Kumin weren’t accused of wrongdoing. Cohen has since turned his firm into a private investment office called Point72 Asset Management that manages his fortune.

Kumin didn’t manage money, but he recruited some of SAC’s star talent, some of whom have gone on to launch vaunted funds. Those recruits included Gabe Plotkin, who launched Melvin Capital, and Aaron Cowen, who founded Suvretta Capital, according to people familiar with the matter.

Among the many recruits was also Mathew Martoma, who in 2014 was convicted of securities fraud and sentenced to nine years in prison. Kumin had hired him in 2006 as an analyst, a fairly junior position in hedge funds, a person with knowledge of the matter said. Martoma later became a portfolio manager, a more senior role.

Those who know Kumin describe a boisterous, warm personality. Kumin “has a taste for popsicle-hued polo shirts and had a powerful charisma that drew comparisons to Bill Clinton,” the journalist Sheelah Kolhatkar wrote in her recently released book about SAC, “Black Edge.”

Kumin is also known for his love of expensive racehorses. The Baltimore Sun profiled him last year as he watched one of his horses win the Preakness Stakes, an elite race in Baltimore.

Folger Hill, at the time of launch, was expected to build on the SAC model, with Kumin working his vast network to find star talent. He founded the fund with Todd Rapp, the former chief risk officer at Highfields Capital Management.

Those who know Kumin say he is a born salesman and has worked hard to build his venture.

“Sol will tell you everything is going great,” said one person close to Folger Hill.

For investors, it has become a wait-and-see situation, one adviser said. The person said that without that strategic partner, investors, new or old, were unlikely to add capital to the fund and were waiting to see what Leucadia, one of Folger Hill’s main backers, would do.

Leucadia says it is fully committed to Folger Hill. The firm has invested $400 million with Folger Hill, a person with knowledge of the matter said. Leucadia, along with Schonfeld, committed $500 million to the firm’s Asia business last year, and some of that money has already been invested.

“We remain supportive of our partner Sol Kumin and Folger Hill,” Leucadia said in a statement to Business Insider. “The business has stabilized over the past few months, and we are pleased with the momentum in Asia.” Selling Folger Hill isn’t easy, people familiar with the matter said. Though it has posted slight gains this year, since its inception, the fund has only lost money while a bull market has raged.

Some investors, meanwhile, have been questioning the pay model. Folger Hill doesn’t charge a management fee in the way many other hedge funds do. Rather, the firm uses a so-called pass-through expense model, in which investors take on the costs of running the fund.

But withdrawals mean fewer investors are taking on the same costs. A person familiar with the matter put those costs at 2% the first year and slightly above that the second year the fund was in operation.

The model is also set up in a way that investors, in addition to paying the pass-through management expenses, pay performance fees to individual portfolio managers at Folger Hill if they log a gain — even if the overall fund is losing money. Performance fees are anywhere from 10% to 20% of the gains, according to a regulatory filing.

The person familiar with the firm said this setup helped retain talent by allowing portfolio managers who post gains to get paid even if their colleagues have lost money.

But that can seem unfair to investors, who are paying a lot of money even as they rack up losses. One adviser to an investor estimated they were paying about 4% to 5% of assets to have their money at Folger Hill.

(A person with knowledge of the business disputed this figure and said Folger Hill’s operating costs were about 2% and were raised slightly last year, not accounting for “netting risk.” Netting risk accounts for the pay investors give to managers that perform well, even if the fund is down.)

In comparison, in a traditional two-and-twenty hedge fund model, investors pay about 2% of assets and a 20% performance fee, sometimes after a hurdle has been passed. This pay system is not unique to Folger Hill. It’s de rigueur at other multimanager hedge funds run by billionaires, like the $26 billion Citadel and $35 billion Millennium, and has drawn criticism from investors.

And Folger Hill, in its latest investor letter, says it’s taking measures to cut operational costs. Kumin said in the letter that management staff had been cut by 17%.

There are bright spots, too. Two people close to the firm said they were happy about the firm’s Asia business, which has posted slight gains since it launched in November — about 3.1% net of fees from November through March, according to a performance document. The Asia unit feeds into the firm’s flagship fund.

Folger Hill is in expansion mode with its Asia unit and has hired more portfolio managers, opening an office in Singapore. That development furthered these two people’s bullishness on the business. The Asia unit is also set up so that it is separate from the US business and would be untouched if the American side closed, the people said.

Still, Folger Hill has to compete with established funds that have posted better performance and fresh startups that have a clean slate.

There’s Brandon Haley’s Holocene Advisors, which launched in New York this month with about $1.5 billion and recently hired one of Folger Hill’s portfolio managers. As soon as this year, Michael Gelband and Hyung Soon Lee, respectively the former bond and equity chiefs at Millennium, are expected to launch a large fund.

A person familiar with Folger Hill said they didn’t worry about the competition.

“If you perform, dollars will come,” this person said, adding they were hopeful about Folger Hill’s recent slight uptick in performance and what they described as a stable investor base. Folger Hill has retained key institutional investors, such as endowments, and Leucadia’s and Schonfeld’s money is locked up, the person said. Kumin has acknowledged the need to do better, and in his latest letter, he detailed ways the firm was improving.

“Throughout the quarter, we made a number of adjustments to our allocations across portfolio managers, individual sectors and geographic areas which have increased portfolio diversification and reduced the overall volatility of the funds,” Kumin wrote.

“Looking ahead, we will continue to be vigilant monitoring our PM teams’ risk exposures and dynamic in our capital allocation approach with the intention of producing a lower volatility return stream,” he added.

One of the people familiar with the firm said they were hopeful about the firm’s 1.2% gain in the first quarter of this year. They also said Folger Hill was deep in discussions with potential partners.

The firm is “finally starting to turn,” the person said, adding that the firm had hundreds of millions in locked-up capital. Folger Hill now manages about $750 million to $800 million, with an additional $200 million that has been committed from Leucadia and Schonfeld, the person said.

In the investor letter, Kumin said he would have more details to share about a prospective investor before June.

In closing, he wrote: “Despite the challenges we have faced over the past two years, our conviction that the multi-manager model of sector-focused, fundamental long/short equity investing, coupled with a well-defined and independent risk management, is a prudent and proven strategy to generate high-quality risk-adjusted returns over the long term.”