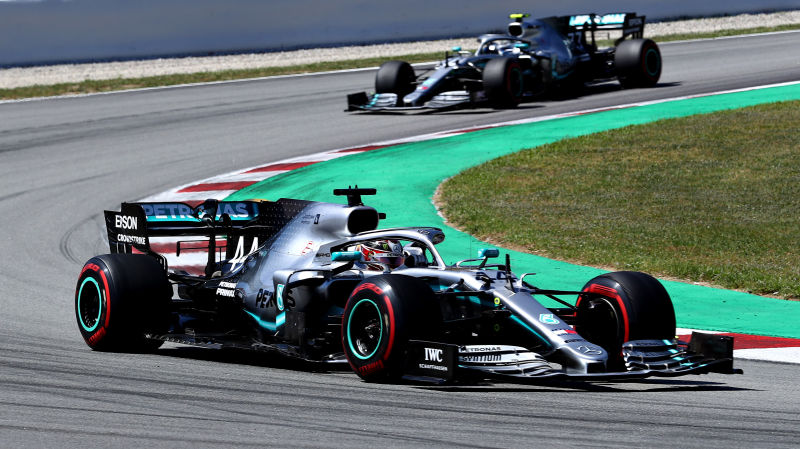 Mercedes, the team that can do no wrong and still succeed even if it doesn’t command a race, has a way of doing that with its front-end setup, as explained in a recent video by former Williams team managerand longtime F1 journalist Peter Windsor: thanks to some extremely trick engineering and manufacturing, these cars coordinate steering inputs to lower the front of the car itself.

The video features motorsports tech expert Craig Scarborough, who noted that the Mercedes team isn’t alone in this type of setup but broke down its approach specifically.

What’s going on here is that Mercedes is mounting the steering in its cars differently than expected, using the force of turning the wheel to act like an anti-roll bar, or to force the nose of the car down. It’s something it can pull off with power steering, some very elaborate manufacturing, and some even more creative thought.

The video is full of technical terms and quick explanations without much regard for labeling what exactly is being discussed, but if it’s a lot that’s new, Mercedes itself put out some good graphics of how all these parts go together on its own video here:

The difference in videos is just that Mercedes, as it is wont to do, downplays any advantages or tricks it’s pulling off.

For even more context and diagrams on Mercedes’ front and rear suspension affecting performance and aerodynamicscan be seen here and here. There’s also more on the steering rules from 2017 Scarborough mentions here.

It’s all a fun thought. Currently, one of the best and worst parts of Formula One is that teams have a lot of freedom in car design. It can, unfortunately, lead to competition droughts with certain teams dominating the series, but it also makes for a fun excuse in learning all of the ways teams, sometimes unsuccessfully, try to get an advantage on others.