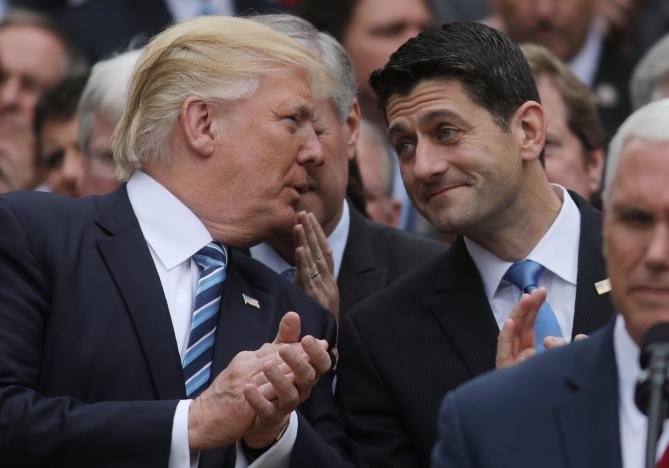 The Congressional Budget Office on Wednesday released an updated analysis of the American Health Care Act, the House GOP healthcare bill, that economists and advocates said contained some alarming takeaways for the future of the fight against the opioid crisis.

While the nonpartisan CBO projected that 23 million more Americans would be uninsured by 2026 under the AHCA compared with projections under the current healthcare system, two other issues are contained within those numbers.

The first: The newly amended AHCA keeps largely in place the more than $800 billion in cuts to federal Medicaid spending over the next decade from the original version of the bill.

It does so by rolling back the Medicaid expansion established under the Affordable Care Act as well as other changes under the law. The CBO estimates that, under the AHCA, approximately 14 million people would come off the Medicaid rolls by 2026.

The second issue, and one not present in the previous version of the AHCA, is the so-called MacArthur Amendment, which would allow states to apply for permission to rescind some of the Affordable Care Act’s regulations if they introduce policies designed to lower insurance premiums.

Christine Eibner, a health economist for the Rand Corporation, said that while there was a lot of uncertainty about how states would change regulations, it was reasonable to think state legislators would be under a lot of pressure to cut back on so-called essential health benefits, or certain conditions that insurers are required to cover, if other states are able to show that doing so brings down premiums. If that happens, substance-abuse treatment is viewed as the benefit “most at risk” to be cut, Eibner told Business Insider.

Approximately 1.84 million people in the US are receiving treatment for substance-use disorders or mental illnesses through the Medicaid expansion or the ACA’s individual insurance marketplace, according to research conducted by Richard Frank, a professor of health economics at Harvard Medical School, and Sherry Glied, a dean at New York University. All of those people would be at risk of losing the approximately $5.5 billion paid out for treatment through those two avenues of insurance.

A 2017 Health and Human Services report found that approximately 34% of individual-market insurance plans did not cover substance-abuse treatment before the Affordable Care Act. Under the AHCA, a similar number would most likely either not cover treatment or begin underwriting substance-use disorder as a preexisting condition for thousands of dollars in premium surcharges, making insurance prohibitively expensive, Frank told Business Insider.

Eibner said the individual market wasn’t the only place where treatment coverage would be affected. While she said employer-sponsored insurance would most likely continue to cover treatment, she expected Medicaid programs in states rolling back regulations related to the essential health benefits to cut substance-abuse treatment coverage as well.

Amendments to the AHCA allocate $15 billion over nine years and $8 billion over five years, respectively, to offset some of the costs to consumers if states waive benefits like substance-abuse treatment coverage and coverage for Americans with preexisting conditions. Frank found in his preliminary calculations, however, that those funds would be exhausted many times over in just a few short years just to pay for treatment for opioid-use disorder and serious mental-health conditions, leaving aside the myriad other conditions those funds are supposed to help cover. Gary Mendell, the CEO of Shatterproof, a national nonprofit working to end the opioid crisis, has come out fervently against the bill.

“It’s unbelievable that in the middle of a crisis our legislators would even consider reducing access to insurance for those needing treatment for substance-use disorder,” Mendell told Business Insider.

While Mendell said he had engaged with the Trump administration over its ongoing commission dedicated to tackling the opioid crisis, he said that if the AHCA were signed into law, the administration and Republicans would have “zero credibility” in trying to fix the crisis because of how many people would be likely to lose access to treatment.

An analysis conducted by Eibner and Christopher Whaley, a policy researcher at Rand, found that in places that waive substance-treatment benefits, the out-of-pocket cost for consumers who use those benefits could rise by $1,333 a year. For “high-need” consumers, like those who need an in-patient stay at a treatment facility, out-of-pocket costs could rise to $12,261 a year.

“This assumes people still continue to use treatment,” Eibner said. “Some may not seek it at all if it becomes too expensive.”

Considered by many experts to be the “gold standard” for overcoming opioid addiction, MAT uses prescription medications like buprenorphine or methadone to reduce cravings, allowing patients to work on the underlying issues leading to their substance use without the constant pressure of withdrawal.

Because of its promising results, MAT has gained bipartisan support in statehouses and on Capitol Hill, but it’s expensive and remains difficult to access.

Health and Human Services Secretary Tom Price said in West Virginia earlier this month that MAT amounted to “substituting one opioid for another,” a claim almost universally rejected by scientific, medical, and treatment communities. Mendell went so far as to call Price’s statement a “dangerous comment that perpetuates misinformation.”